Reimagining fundraising in the COVID Landscape 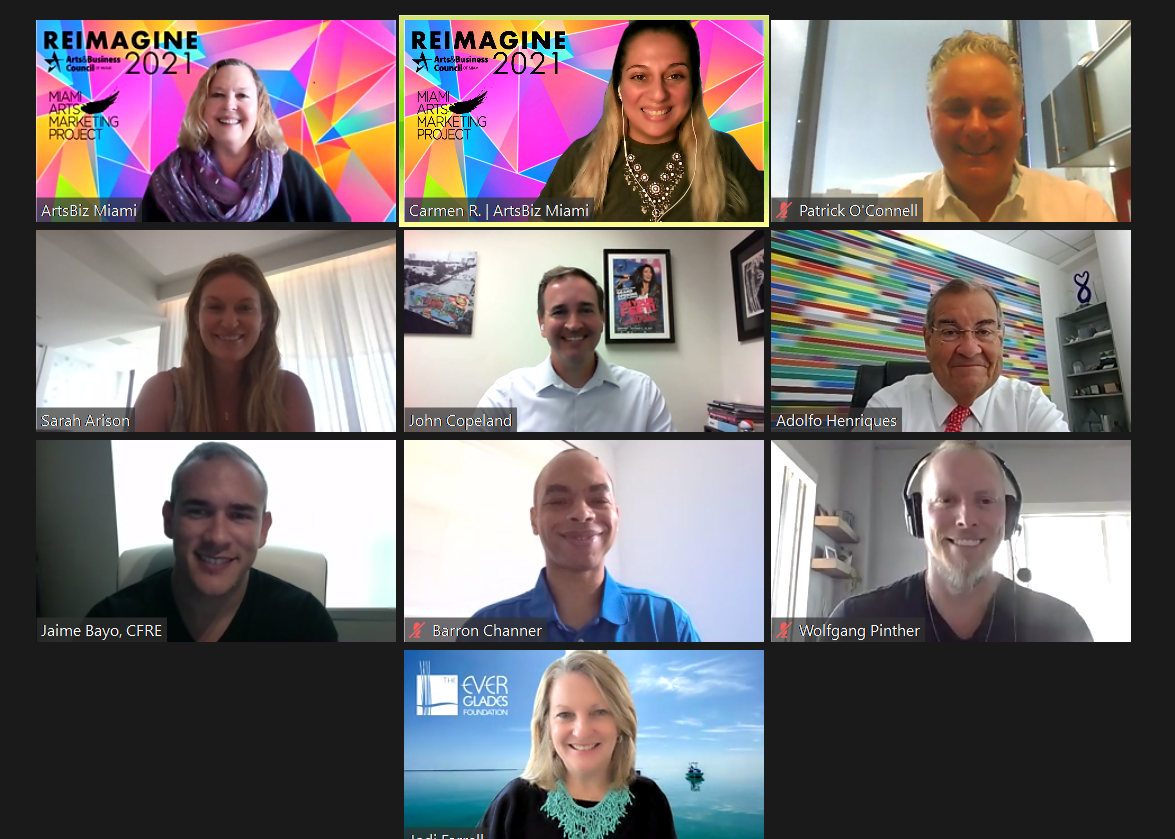 Fundraising during a pandemic can make anyone’s head spin. How do you go about it at a time when performances and exhibitions are just slowly starting to make a comeback?

Approaching individuals and corporations for donations is always a delicate balance. Throw in the unpredictable COVID pandemic, which still has no firm end date in sight, and that task seems near impossible.

That was the topic tackled at the Arts & Business Council of Miami’s MAMP Lab 2: Fundraising in the New Landscape.

Spearheaded by John Copeland of the Greater Miami Convention & Visitors Bureau, he served as lead moderator. Joining him were Sarah Arison of Arison Arts Foundation and National YoungArts Foundation and Jodi Mailander Farrell, vice president of Development for the Everglades Foundation.

The trio led the conversation about how COVID has changed fundraising. They asked the day’s panelists to discuss:

On the panel during the virtual presentation were:

Each brought their own unique insight into the morning’s topics:

Channer, who is involved in various arts organizations, said that “challenges always force you to evolve.” He shared that at the Knight Foundation they’ve proactively invest in helping organizations evolve on using technology as a tool to engage in more immersive and broad ways. “It helps bridge the socio-economic distance. People want to help other people so you can create narratives about the impact to people.”

Additionally, the PAMM Ambassadors program which has been renamed for African American Art, depends less on the Knight Foundation than originally, according to Channer. It was originally seeded with Jorge Perez and the Knight Foundation and was begun in an effort to engage the black community. “The audience has run with it for the last six or seven years and they’re contributing heavily. The endowment is now more than $3 million,” he said.

For their fundraising efforts, Channer said they had to pool together their collective efforts, engage in the larger community and help those disconnected from “art” understand the value of harnessing “intelligence” across the community in all forms.

O’Connell said they have doubled down on the Illuminate Coral Gables project through volunteer efforts. He thanked Rosie Gordon-Wallace, of Diaspora Vibe Cultural Arts Incubator, founder of the arts organization, as she has been very involved in the project. O’Connell added that Illuminate has been their most successful endeavor.

The Illuminate Festival also allowed O’Connell and the planners to see fundraising from both sides – as a sponsor and as someone asking for funding. It helps, too, that O’Connell has seen many developers and realtors collaborating with visual artists.

Henriques spoke about impactful sponsorship and how at Related Group that helped cement his commitment to help them build the current site. “I’m very proud of the small part he played to make this happen,” he said. “We’ve partnered with several organizations and ensured their partnerships are more impactful. We have not reinvented the wheel; our money is getting where we want it to get to.”

Henriques works with Jorge Perez, renowned art collector and Founder of El Espacio 23 in Allapattah. He explained “art at Related Group is intertwined in everything, it is essential to our business. How we position ourselves in every facet. It gives people confidence and helps us communicate with other people.”

He also believes that business leaders truly know the impact of the arts. Echoing something both Arison and Channer said, at Related they have heard from people that by using technology they have been able to raise funds on the personal side.

“It put a wrench in our budgeting process, which led to looking at a lot of these causes one by one, which isn’t our optimal approach, opting to not sponsor or support any causes that have an in-person component,” said Pinther.

Putting funds in the hands of their professionals was important to us and also inviting their colleagues and community contacts and have them pick how they wanted to be involved and show their support.

During the Thought Leaders portion of the presentation, Copeland posed the question to Mailander Farrell, Arison Bayo and Stein, asking how fundraising has changed for them professionally

Here is what they shared:

Farrell said the power of one-on-one contact has been lost but, the silver lining is they have become more engaged with people they may not have had contact with otherwise. “Also, people are converting their gifts to non-restricted. We can gain strength from unrestricted gifts. I have also seen funding shifts to different needs like putting food on people’s tables,” she said.

Farrell shared that since she is a writer (she was a reporter for The Miami Herald for many years), words matter.

“We should be talking about this being an investment – in human life, an artists’ work and career, that we can learn from each other. Words matter and we must choose them carefully. Do not ignore the importance of stories or anecdotes. Words and statistics have to go hand in hand,” she said.

“The biggest pitfall,” Farrell said, “is lack of preparation.” She also suggested that people talk less and listen more. “We tend to over talk, especially when we get nervous. Ask questions to learn what motivates people and take time to listen. If someone agrees to give you a gift, stop there. Time kills all deals, don’t let an offer linger, reach out the minute someone shows interest.”

She also stressed the importance of talking about endowments and reserve funds in the same breath that you talk about annual fundraising. “Now is the time to talk to donors about blended giving and, at the same time, consider being part of their endowment fund so they are part of their future.”

Bayo shared that rarely would he not be in person when asking for a major gift. He went on to explain that sponsors care about donors and corporate donors care about the mission. “Those are vastly different conversations. Corporate sponsorship is more about marketing and public relations, while the donor is looking at the mission,” he said.

He went on to say, “we have stopped talking about planned gifts and when people are deceased, we’ve scaled that back at the foundation as well as some of the campaigns we had planned because now is not a good time to plan about that.”

Stein’s biggest fundraising effort was keeping her subscribers from asking for refunds. They are making up some of their shows so they could retain what they had. “It was a challenge to have our subscribers keep their tickets for the next season. We hope to start up again in November with our in-person season,” she said.

She shared the story of a plane ride she took with her fellow Actors’ Playhouse staff back in 1997, where they casually asked Baptist Health if they would want to be a sponsor for their show “The Rose.” “The show had to do with the heart, and we figured out a way to give a message and a meaning. Baptist said yes and went on to become a sponsor when they opened their pediatric unit,” she said.

Echoing what Farrell said, Stein stressed that “the endowment is particularly important and letting people know about the investment in the community. Always keep your connections strong.”

Arison had a solid message throughout the program and that is the value of the arts and how not a single thing in life that has not been affected by artists.

“Everything in life during the pandemic – movies, television, music – is touched by artists. This is why the support of individual artists is so important,” she said. “Artists are the ones creating our community and chronicling our social changes in the world. The art that’s going to come out of the pandemic is extraordinary.”

The next MAMP Lab “Impactful Virtual Arts Events” is scheduled for March 23. Click here to register for the virtual workshop.