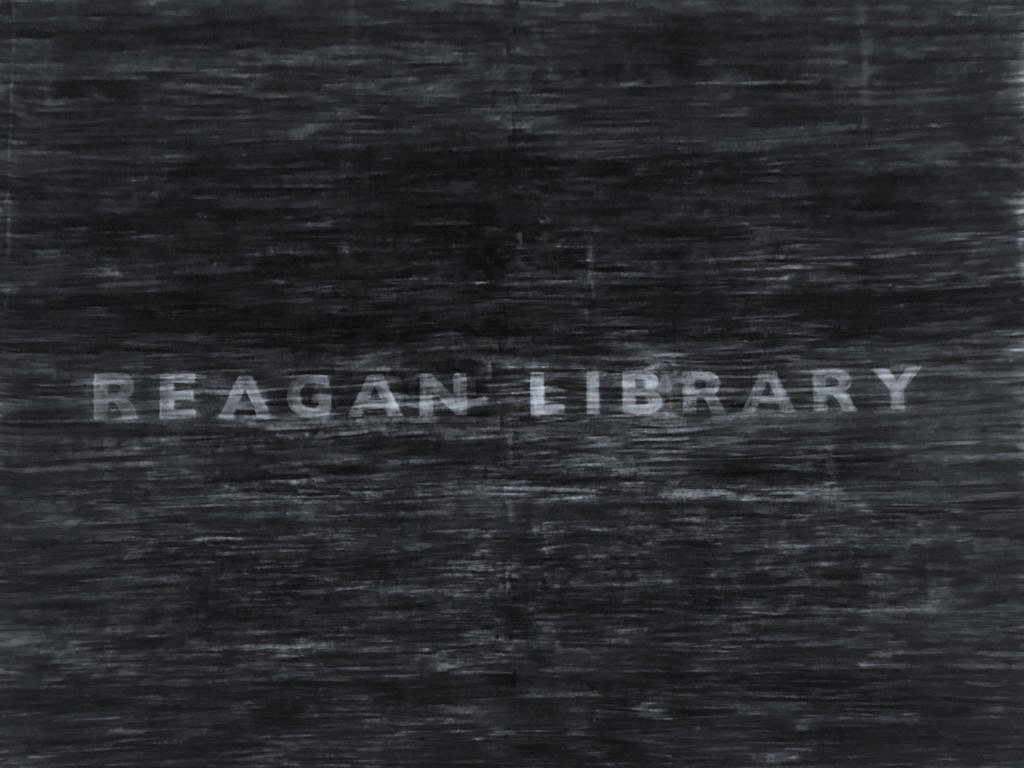 Her pieces are borne amidst a pile of dying embers and utter loss. And sometimes it still smells like devastation.

Cara Despain focuses her artwork on climate change and the effects of wildfires on the environment. She’s seen homes, including those in Paradise, California, reduced to ash and burnt to the ground.

“Some of these are from extremely catastrophic fires, ” she said. “It is horrifying.”

Despain carefully picks through the refuse, gathers the vestiges from these events and then transforms them into something entirely new.

“I’ve been collecting debris from fires in the western US. California, Colorado and Utah,” explained Despain. “I go directly to these sites and collect debris and I use it to saturate the canvas with pure carbon.”

This is exactly the method she uses in her piece entitled “Reagan Library.”

The charcoal was obtained from the Easy Fire, a brushfire in Simi Valley, California which encroached the grounds of the Reagan Presidential Library and Museum in 2019.

Her artwork is included in this year’s Oolites Arts acquisition program. Despain is one of seven Miami-based artists who were plucked from a pool of more than 500 current or past residents.

She joins a diverse group that includes Susan Lee-Chun, Nicolas Lobo, Reginald O’Neal, Marielle Plaisir, Jamilah Sabur and Antonia Wright. A number of art disciplines are featured in the collection including paintings, sculptures and video and installations,

“[This program] reflects Oolite Arts continuing commitment to supporting our visual artists in our community. It’s another example we are there to elevate the artists and their work and celebrate their careers.”

Their work will be showcased in 2023 once Oolie Arts opens their new campus in the City of Miami and then donated to museums across the world. Launched last year, the program actively seeks to propel the careers of the selected artists by providing opportunities to showcase Miami artists in major collections.

“…We are going to pay it forward. It’s the most important thing you can do other than buying their work,” Scholl said. “When we get ready to donate the work we will be looking to place the work in the best possible museum based upon where the artist’s career is.”

Despain is not only grateful for the Oolite’s Acquisition program but she also hopes that her piece will ultimately spark interest in her overall message.

“I don’t pretend that my artwork is necessarily life changing, but the idea that somebody, somewhere can be confronted with the smelly sooty pure aftermath [of these fires] is a way for me to give back and educate, especially when they encounter my painting in a disconnected way like in Miami.

“I hope that those who sees it, places it in a larger body of work because each individual painting represents not only a fire but collectively represents a crisis”

Fire and ice are thrust together in a jarring rendition of one artist’s fateful accident when she was just 15 years old.

Wright is thankful that she will now be able to showcase such a personal piece to a much larger audience. 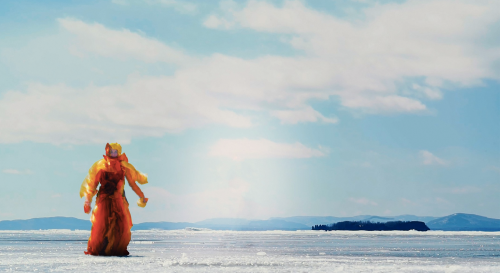 Antonia Wright – Under the water was sand, then rocks, miles of rocks, then fire. Image courtesy Oolite Arts.

She remembers the day as if it was yesterday. “I was walking on the [frozen] lake with a friend when all of a sudden the  ice started to thin,” said Wright. “I heard cracking sounds. I started crawling on the pieces of the lake. I took my fists and punched the ice till I got to the shore. It was a very intense experience.”

“Under the water was sand, then rocks, miles of rocks, then fire” explores her ordeal in a video piece that is also inspired by the color palette seen in J. M. W. Turner’s The Burning of the Houses of Lords and Commons.

“I wanted to look like fire submerging in the lake,” Wright said.

But filming the piece turned out to be more than she bargained for.

“I come up with these ideas and then I work backwards with the logistics,” said Wright. “It was filmed in Vermont and It was cold.I knew that we had to have a lot of safety precautions in place.” As she prepared, she discovered that not everyone was necessarily on board with her vision.

“I called different ice divers. They said, “You’re nuts” and then hung up on me. They didn’t give me the time of day.”

Her persistence, however, paid off. “I called a dive shop in Burlington,Vermont and they said, “This sounds awesome. It sounds fun! We would love to help.”

With that settled she then had to brace herself for the physical aspects of her piece. That proved to be just as challenging.

“Mentally I prepared for it,”  said Wright. “I researched how my body would react. I was taking a lot of ice baths and coming from Miami I had zero tolerance for cold weather. I knew that you could build up your tolerance and I started meditating so I could control myself.”

And what was the end result?

“It was excruciating,” she said with a laugh. “It felt like fire, but performances are all about being present in the moment.”

Lee-Chun, who hails from Chicago, is thrilled to be included in the Acquisitions program.

“It’s really exciting as well as humbling,” she said.  “I tried to find some footing in the arts community [here in Miami] so this is extremely rewarding.” 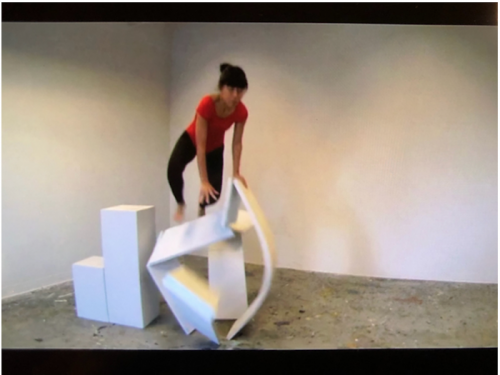 Lee-Chun, who knows all about perseverance, explores the theme in her video piece Untitled (Apparatus, #1). In it, she repeatedly attempts to climb onto three columns. “It’s myself as a performer in the video. I’m dressed as a gymnast.  The pedestals get overlooked but they have a sense of purpose. I come crashing down because of my weight.

There’s a constant urgency and wanting to succeed in this challenge. I am constantly moving toward the inevitable. “There is this precarious act and we know that this will happen again and again. We go through challenges even though we know it will happen.”

The piece, Lee-Chun explains, also symbolically tackles long held notions and ideas. This is particularly evident given the circumstances over the previous year.

“It’s meant to be an analogy [addressing] anything and everything around us. Over the year since the lockdown we are realizing that there are problems with structures. How can we challenge these things and what can happen in this rebuilding. There are so many uncertainties that we are living through now.”

The scene was Rainbow Village in Overtown. 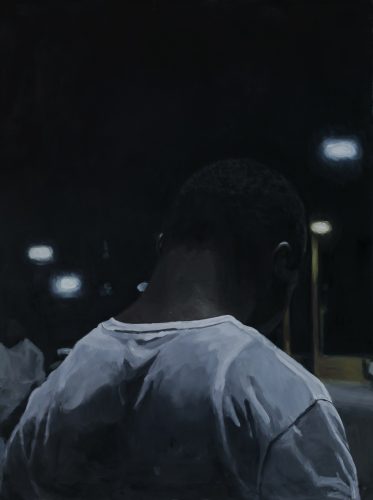 Hanging out and having a good time is something most people took for granted prior to the pandemic. But now residents were clamoring to be free. Reginald O’Neal captures the moment in an untitled 60 by 80 inch oil on canvas portrait.

“It was really crowded,” recalls O’Neal.

“My friends were gambling. Everybody was out there watching people playing football. I am looking at one person. It is a portrait of the male figure.His back is turned to the audience. He is in a comfortable space.”

The event, he said, was particularly memorable, even more so now that the work has been commissioned by Oolite Arts.

“That night was really special. We hadn’t been able to do anything in a really long while. I felt a tremendous amount of joy that night.”

O’Neal aims to consistently capture the purity of the human experience while displaying it for the world to see. “I’m placing an extension of myself and my community through this piece,” he said.

“My mission and goal is to be honest and portray things that are beautiful.”

The full list of artists accepted to the Oolite Acquisition Program:

For more information on the Oolite Arts Acquisition Program visit their website at oolitearts.org/acquisitions