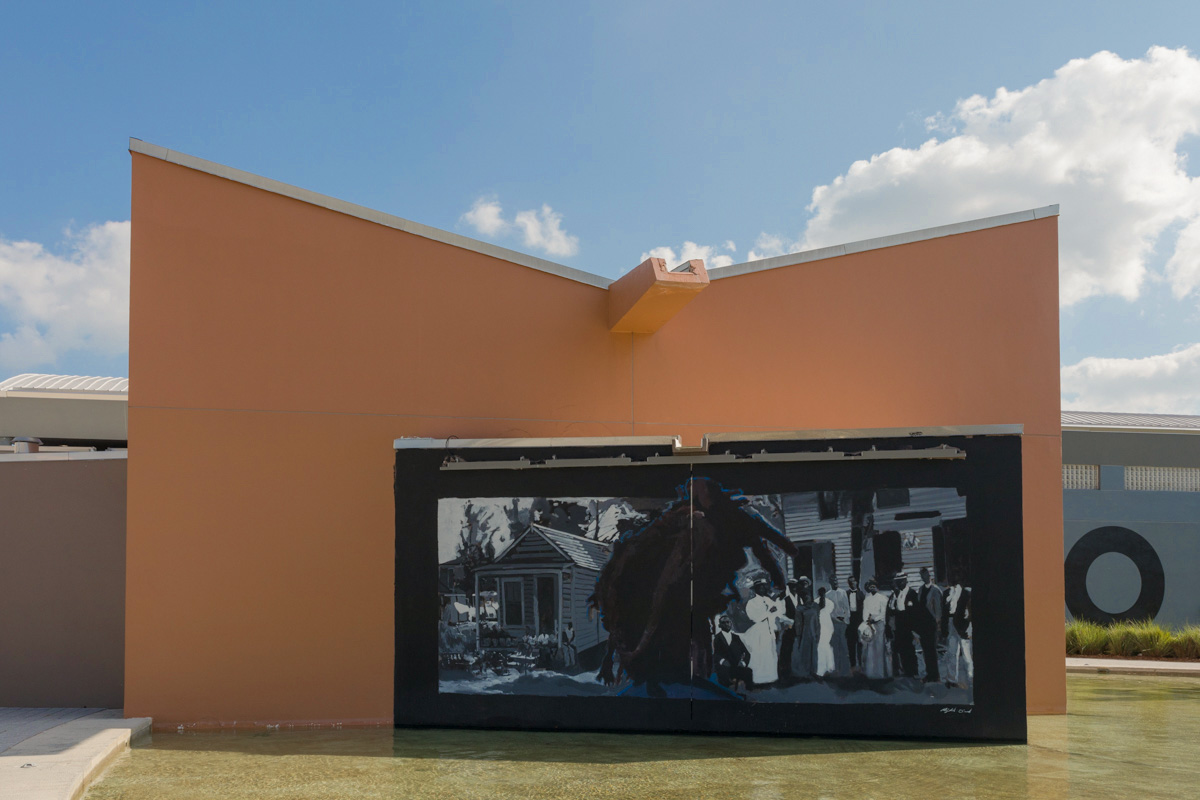 As I Am by Reginald O’Neal, currently on display at the MOCA Plaza in North Miami as part of the Art on the Plaza initiative happening through November. (Photo courtesy of the artist.)

Two years ago, when the City of North Miami renovated the Museum of Contemporary Art (MOCA) Plaza, located in the heart of the city’s busiest downtown street NE 125 St., they created an opportunity for public arts.

“The Plaza was screaming for activation and it was something we had always envisioned and wanted to do,” said MOCA Executive Director Chana Sheldon. “While MOCA was closed due to COVID-19, we had time to think about public activations and utilizing the plaza more.”

One such activation, the “I Am A Man” photograph by Carl Juste (click here to see article in our blog) drew a great response and feedback.

“That led us to realize public art is a platform for very important conversations. We then approached the city’s Community Redevelopment Agency (CRA) and they understood the importance of supporting this initiative,” said Sheldon.

With the guidance and support of Amanda Sanfilippo Long of the Miami-Dade County Department of Cultural Affairs, they did a limited call for artists in a short amount of time.

Currently on display is the mural As I Am by Reginald O’Neal. In the work he depicts his cultural heritage in relation to the historic Overtown neighborhood featuring images of past and present. The powerful black and white piece will grace the plaza until March 7. 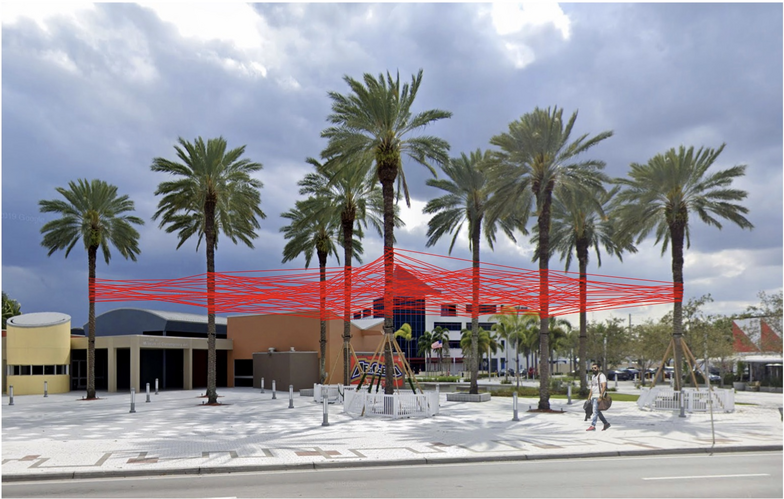 Rendering of “The Visible Invisible,” installation. (Rendering courtesy of the artists.)

The duo Laz Ojalde & Natalie Zlamalova, whose artistic name is AMLgMATD, will have their piece The Visible Invisible installed by March 19. They explain the process of installation and inspiration behind it.

“When U.S. deaths due to COVID-19 reached the tragic count of 200,000 we felt there should be a local temporary memorial to this milestone,” said Ojalde and Zlamalova. “When the toll doubled with no real end in sight, we tried to find light in the darkness of hardship, and focus on the good that emerged in many, the willingness of going the extra mile in most, and the strength of the spirit in all of us.”

Over four days they will install thousands of feet of red rope between the palms in the MOCA courtyard using mobile scaffolding platforms and the assistance of crews on the ground. Each palm will be connected to its neighboring palm and that palm to the next, until they are all intertwined and woven together.

Inspired by the ideas present in Eastern philosophies where two or more individuals are connected by a red thread “we see these interconnecting lines as the individual threads that weave the fabric of our society, no matter how tangled, stretched, or frayed. As humans, we all are experiencing the same circumstances and similar hardships, hopefully bringing us closer together, with more understanding of one another, no matter our differences,” they said.

The two knew from the site visit that MOCA “was the right place to make our concept a reality. MOCA’s stately palms in the main courtyard presented the perfect canvas to scale up our concept and address it directly to the community that we are a part of,” the duo said.

And the takeaway for the public? “That they see the physical connections we have created among the palms as the invisible connection we have with one another. Even though it may not be obvious at first, one’s actions directly and indirectly affect others. We ought to keep the shared fabric of our stories strong and the hidden bond we all have to one another unbreakable,” said Ojalde and Zlamalova. It will be up until April 18. 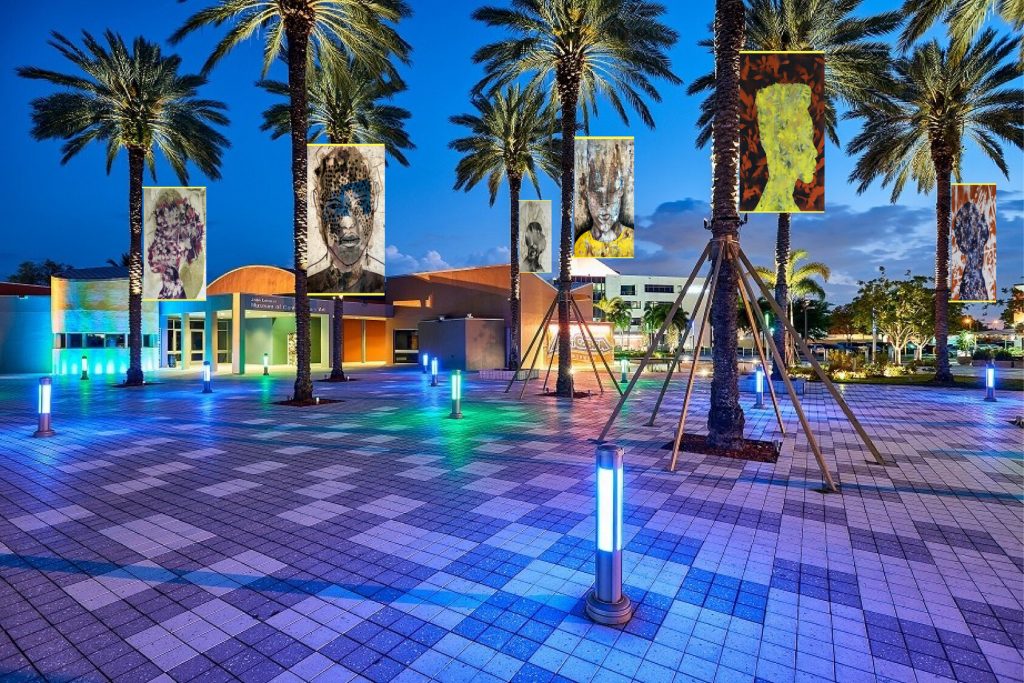 Rendering of “After the Rain Comes Light: Portraits of Resilience.” (Rendering courtesy of the artists.)

Opening April 30 to coincide with the beginning of Haitian Heritage Month in May, will be banners by Haitian American artists Morel Doucet and Stephen Arboite. Titled After the Rain Comes Light: Portraits of Resilience, they will be up through June 27.

Arboite said, “we’re both going to be hands on for each particular piece combining our styles and coming up with our renderings. Our pieces just happen to have a similar aesthetic and Morel and I have been talking about collaborating for quite some time and now we are both finally getting the opportunity.”

In all they will be creating anywhere from six to 12 banners.

“How many we produce will depend on our budget. All the banners will be the same size and for the actual portraits to be displayed on them, we will be making well over a dozen,” said Doucet. “And then from those, we will pick the strongest ones.”

The duo sees this is a great opportunity to showcase how the Haitian community has shaped and impacted South Florida, “especially here in North Miami’s MOCA,” they said. “Many of our subjects are Haitian American so it’s great to see those residents reflected in a different light. Just having these people be included in this conversation is important, it feels more inclusive.” 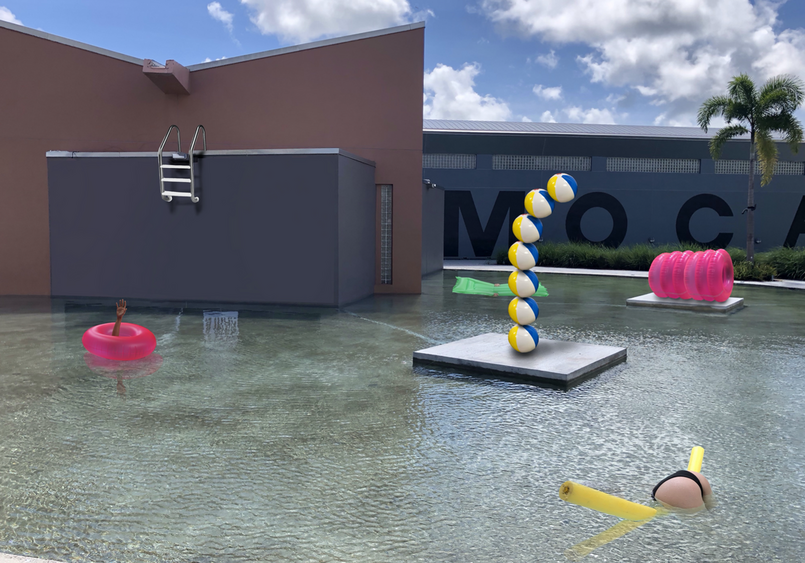 Rendering of Nice’n Easy installation. (Rendering courtesy of the artists.)

Featured on the plaza after them from July 9 to Aug. 22 will be the work of duo Allison Matherly and Jeffrey Noble who go by the name Nice’n Easy. The two will activate MOCA’s fountain and transform it into a swimming pool. The playful pieces will address the deeper issues of anxiety and concerns for safety and well-being with regards to the pandemic.

Titled We’re all in this Together, that name is a play on the well-meaning platitude that was meme-ified to highlight the objective disparities between people from the biological to the social, as explained by Matherly and Noble.

“This collection of work carries undertones of dark humor beneath its playful aesthetic. The figure in distress in this installation is a theme taken from art history. A series of drowning figures perform as a metaphor for the overwhelming feelings felt by so many in day-to-day life for various reasons,” they said.

Over the last year they noticed the cacophony of suggestions and platitudes given to concrete problems at both the personal and societal level.

“That keen awareness is why this work explores psycho-spiritual wellness philosophies, their usefulness/uselessness/misuse and the individual’s role in utilizing such philosophies to arrive at states of denial, escapism or surrender,” said Matherly and Noble.

A bikini-bottomed woman, colorful multi-colored beach balls and a pool noodle and inflatables, strategically placed around the fountain, make up the installation. Although the figures are pastel and bright-colored, the duo are serious about the work’s message.

“It is not our intention to make light of anyone’s respective suffering but to acknowledge the complexities of our world and attempt to consciously navigate the lines that define social taboos resulting from these complex dynamics,” they said. “We feel incredibly grateful to be included with this group of artists, whose work we admire, and to be showing at MOCA. While we take the most pleasure from exploring ideas through form, it is always validating to be acknowledged by peers and institutions.” 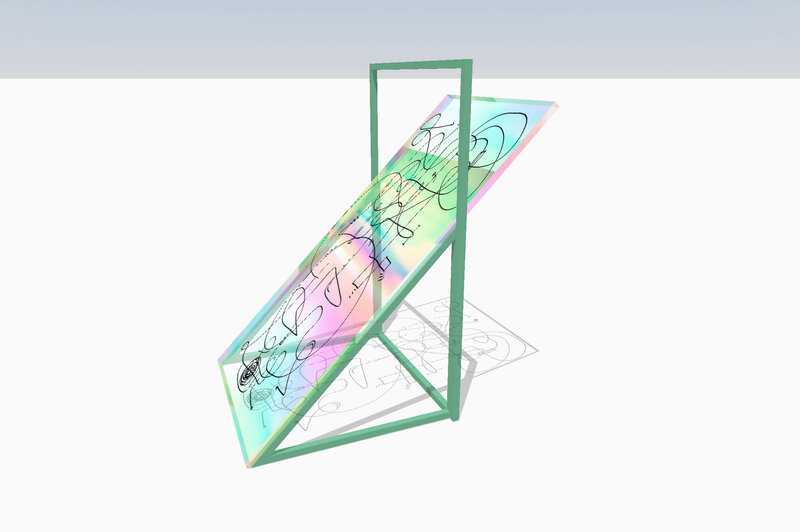 Rendering of Najja Moon’s installation. (Image courtesy of the artist.)

Closing out the MOCA Art on the Plaza series will be Najja Moon’s installation that will resemble a large-scale mirror. Described as “a dynamic sculptural intervention exploring themes of reflection and self-empowerment,” it will be on view Sept. 3 through Nov. 14.

The piece, which is still in development, “is being created from a standard slab of glass and ultimately, the work will encourage viewers to experience it from multiple viewpoints, see themselves reflected and experience intricate shadows,” said Moon. “People will create shadows on the ground using different props that will be part of the installation.”

Moon came to this project after being asked by Sanfilippo Long of Cultural Affairs. “I had collaborated on a public art project in 2019 “How to Patch a Leaky Roof,” an project in Little Haiti with red, blue and white umbrellas adorned with  Creole words created to mimic those in the Miami Design District.  It was then Amanda reached out about this public art program at MOCA.”

The Art on the Plaza project Moon says, provided more creative freedom, allowing her to use public space to display the work.

Moon’s piece to be displayed started more as a material study, of people interacting with work without physically touching it, kind of a 2020 prompt, she said.

“I spent 2020 studying the glass and how the sun reflects off it and the light dances off it. This will encourage people to move around the sculpture,” Moon said. “I’ve also been making abstract drawings and one of them will be incorporated into the piece and will act as an abstract hopscotch.”

Bringing all these artists together is at the root of this initiative said Sheldon from MOCA. It’s just one of the many ways they continually strive to support local artists in both good and bad times.

“It is always refreshing to see how artists respond to a space in a different way. Artists are always a great resource for ideas and different approaches to things,” she said. “We’re now in the process of creating some virtual public events with the artists, creating a platform around the work.”

Ultimately, the activation program at MOCA serves as a silver lining during all the trauma caused by the pandemic. It has allowed them to connect with the community and serve an area of the region “that doesn’t have much happening in the way of public art. With this program I’m excited to say that we are filling that need,” she said.

Learn more about the MOCA Art on the Plaza program by visiting their website.