Murals in Miami to Honor Victims of Police Brutality 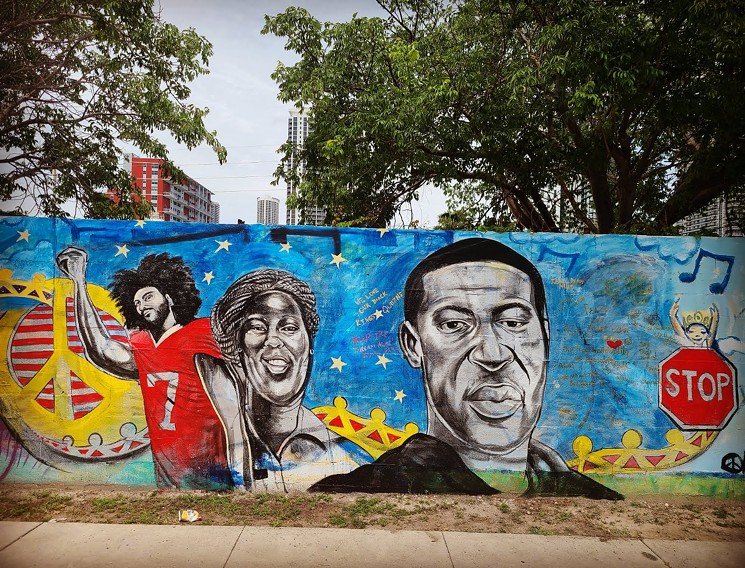 After George Floyd’s death, a lot of protests erupted in the country. People took to the streets with signs and slogans such as “Black Lives Matter” to condemn police brutality. The artists also took to the streets to protest in the way they know best: art. They express their anger and outrage through murals like the one Kyle Holbrook painted in Overtown, Miami’s historic black neighborhood. Other artists are planning to do the same in areas such as Little Haiti and Wynwood.

“Art is the only thing that will remain to remind people of this time after the protests have wound down,” declared muralist Kyle Holbrook who painted in Overtown a mural to honor black lives.

Kyle painted the mural in the heat of the action, during the first demonstrations that took place after George Floyd’s death. “It was the first Sunday of the protests,” Kyle remembers. “The protesters were blocking I-95. Many of them, probably 200 people, walked by the mural and wrote messages such as “Black lives matter,” “Stop police brutality,” “Defund the police,” or “Our voices won’t be stopped.”

In his mural located on NW First Avenue and 16th Street, the Pittsburgh native honored Colin Kaepernick, Breonna Taylor, and George Floyd. “I picked George Floyd because he’s a new symbol for the movement, like Colin Kaepernick. I chose Taylor because her death happened around this time, and because of the gruesome aspect of it. She got shot while sleeping in her own home,” explains the artist.

Painting the mural took Kyle only two days. Without a doubt, he was inspired. The most important to him was to get the message across. One of the reasons he acted so quickly is because he didn’t want the protest message to be “highjacked.” He explains: “First I saw some people protesting peacefully, then I saw people rioting and looting. It was not the same crowd. I didn’t want people to steal or hijack the message, so I thought it was important to paint a mural that clearly conveys the message, which is about stopping police brutality. A mural can’t be hijacked,” the African American muralist said.

To Kyle Holbrook, police brutality is a personal matter. He was himself a victim of it. While in police custody in Cleveland when he was 19, he remembers he got hit in the throat with a Billy club while he had handcuffs on. “At the same time, another officer was trying to gouge my eyes out,” recalled Kyle who added he’s lucky to be alive. The artist also lost a friend and his daughter’s godfather to police brutality.

Since then, Kyle has painted more than two hundred murals, particularly in his hometown Pittsburgh, Miami (Florida), Pennsylvania, and even London. He has been transforming the walls of communities into murals depicting local and national histories for years. The Overtown mural is his first one in Miami about police brutality. He previously painted a mural honoring Kobe Bryant after the tragic death of the NBA legend.

Kyle Holbrooke thinks art plays a critical role in changing mentalities. The protests will come and go, but ten years from now, the mural will be the constant reminder of this time in history and the continued awareness of racism and police brutality. “Art has always played a critical role in revolutions. Throughout history, art and imagery have always paved a pathway to the visual voice of the message.”

Other mural projects are underway in Miami. Kyle Holbrooke announced he’s working with other artists to paint something in Wynwood. In Little Haiti, the renowned muralist Serge Toussaint, along with other artists, is planning to paint a mural mid-July behind the Little Haiti Cultural Center (212 NE 59th Terrace, Miami, FL 33137). It will be to honor George Floyd and all the victims of police brutality whose names will be written on the wall. “The Haitian touch will be the BLM fist painted in blue and red, the Haitian flag colors” he said.
Murals are powerful ways of expression, particularly in circumstances like these. People can easily see them; to repeat Kyle Holbrooke: “You can’t turn them off like a TV.”