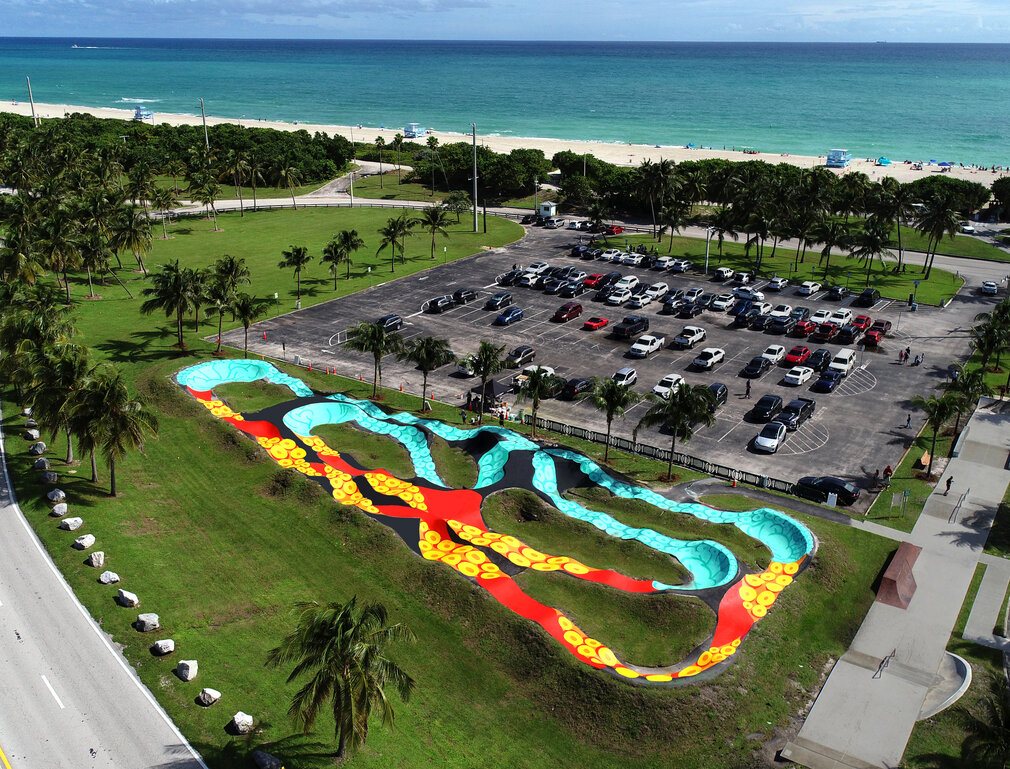 Skateboarding and mural artwork are a match made in heaven. The passion with which skaters ride and soar is equal to the one an artist pours into their very visible work.

The ultimate goal – to keep skaters safe while skating using mural artwork as the vehicle.

“We thank our partners at the University of Miami Health System KiDZ Neuroscience Center and artist Ray Jaffet for providing a creative way to communicate vital safety messages to young skateboarders in a clear, concise, fun and interactive manner,” said Miami-Dade County Parks Director Maria I. Nardi. “It’s all part of our vision to safely connect people and parks for life throughout Miami-Dade County.”

“I live in Bal Harbor and drive by that skate park every day and take my dog to the dog park there,” said Dr. Gillian Hotz, director of the UHealth Concussion Program, and director of the KiDZ Neuroscience Center, who is a nationally-renowned expert in concussions. “I would see kids on all these different apparatus without helmets and it just made me nuts!”

At the end of 2018 she decided to act and approached Miami-Dade County Parks with an idea she had.

“Our KiDZ Science Center already has a relationship with Miami-Dade Parks, they do helmet and bike safety initiatives and we already know everybody in parks,” she said. “That’s when I planted the bug in their ear about commissioning an urban artist to put in some safety messaging.”

The minute the Parks Department gave the go-ahead, she went to speak to artist Rey Jaffet whose work she was familiar with, to create the project.

Turns out Jaffet was a good friend of Katrina, a nurse that once worked for Dr. Hotz.

“Katrina had shown me a mural that Rey had done commemorating his friend Jonathan who passed away. I saw this beautiful angel he painted and could see how passionate he was about his work,” said Dr. Hotz. “I immediately asked her to introduce me to Rey.”

Jaffet, a Miami native who attended Palmetto High School, talks about his friend with much love and compassion.

“There’s an organization called GIVE that Jonathan was very involved in and so when he passed, I really dove in and took on some of the things that he believed in and that that we believed in together,” said Jaffet. “I traveled the world with his parents painting murals in different countries as part of the GIVE Foundation. With GIVE we also created the Brothers Project.”

Rey’s work dots the Miami landscape and can be seen on several buildings including the Miami Jewish Health Systems and the “Declaration of Hope,” a 14-story mural that adorns the side of Pinnacle Heights, a mixed income community at NW 36 St. and 36 Ave. His murals can also be seen around Wynwood and he was awarded the National Scholastic American Visions Drawing Award when he was 17 years old. That award-winning piece was displayed at New York City’s Carnegie Hall. 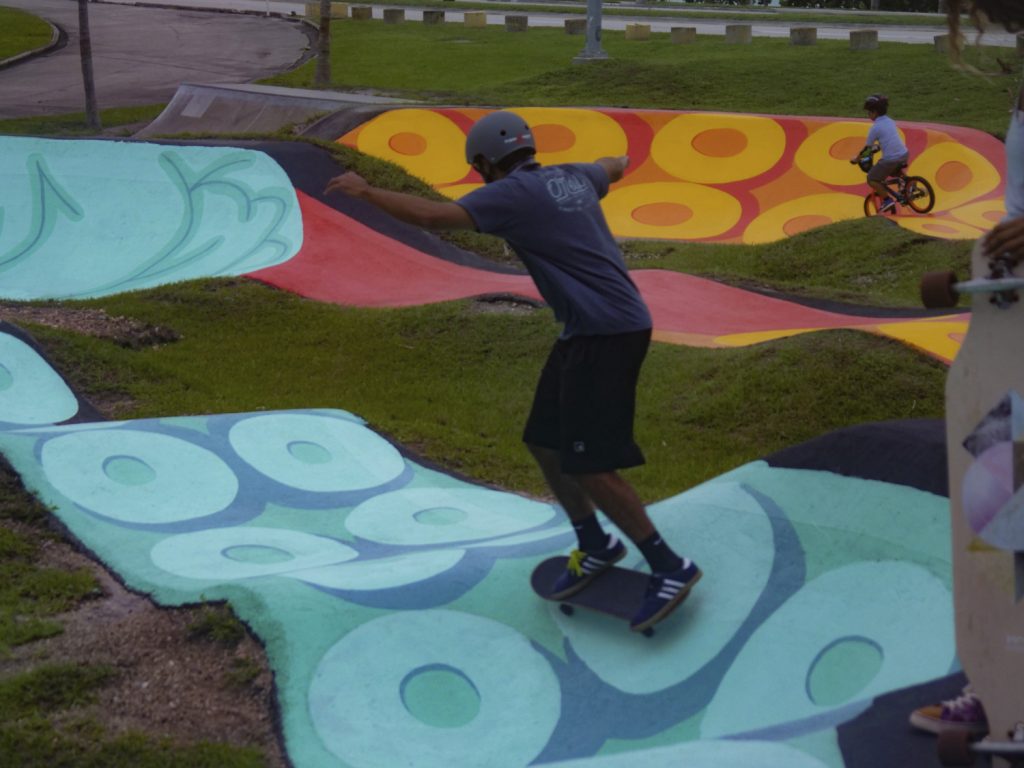 Once Dr. Hotz met and spoke to Rey about her idea, and when Rey mentioned to her he’d been treated by her for a concussion in high school at the Neuroscience Center, the two went to meet with staff from the Department of Parks and Recreation and Operations.

“I love how things happen organically, a lot of my projects have happened by word of mouth,” said Jaffet. He recalls when Hotz approached him and when he first went to the park.

“I knew my design had to flow with the park. I knew it needed an element how it would look from the air, street, when it was used and how it would feel. All of those elements factored into the design of the skatepark,” he said.

“It took about a year to get the renderings approved since they project was slow going due to Covid-19. Once they were approved, the Parks Department gave us the first two weeks of October to complete the project,” she said.

The colorful mural features a looping design of octopus tentacles and brains embedded with safety tips and reminders to skateboarders to wear a helmet. Jaffet had help creating the mural.

“This was the first real time that I had several people helping me with painting the mural, many of which were volunteers and that takes a lot of trust in a way,” he said. “It showed they wanted to keep the park up and there was definitely a sense of community when creating it.”

The public was able to participate because he created the mural shell for them the best that he could. Essentially, he sketched it out and they came in filled it in with color.

Also involved in the project was Jonathan Strauss owner of Skateboard Supercross who built the skate park, as well as many others around the city. His company also certifies instructors to teach skaters at the parks.

Dr. Hotz and Jaffet both know Strauss and worked with him during the process.

“I mentioned to Jonathan that we were going to commission Rey to do these drawings and I asked him what kind of paint to use when creating the mural,” said Dr. Hotz.

Rey said, “Jonathan Strauss is a good friend and was there during the design process of the mural and was very supportive. It was very pleasant because he gave me freedom to create, within park boundaries of course.”

This was Phase I of the Haulover Park project, Phase II will include incorporating skatepark guards, ensuring tracks are swept free of any stones and giving basic skate lessons to the younger kids.

“The volunteers that came to help paint the mural will eventually be certified to instruct the skaters,” said Dr. Hotz.

Next up…incorporating artwork of some type into the other six skate parks in Miami-Dade County. “I’ve got the artists lined up for the other parks. I’m going to be involved in getting this implemented at all the parks. And the art can vary, it could be a sculpture or an artistic messaging board,” said Dr. Hotz.

“The idea is to continue to have me involved with the rest of the skate parks. I have several parks that want to do things and just seeing how we can get these done. We want to give a different feeling to each park where they’re cohesive but still different,” he said.

Rey’s mural came first because parks approved it but “the funding is there to do a sculpture that I designed and finished but parks hasn’t approved it. This one will most likely go to a different park.”

If the other parks are anything like the one in Haulover, they will be a huge hit with skaters. “I’ve been by the Haulover Park and the kids just love it,” said Dr. Hotz.