Miami New Drama brings back ‘A Special Day’ with free shows through Oct. 17 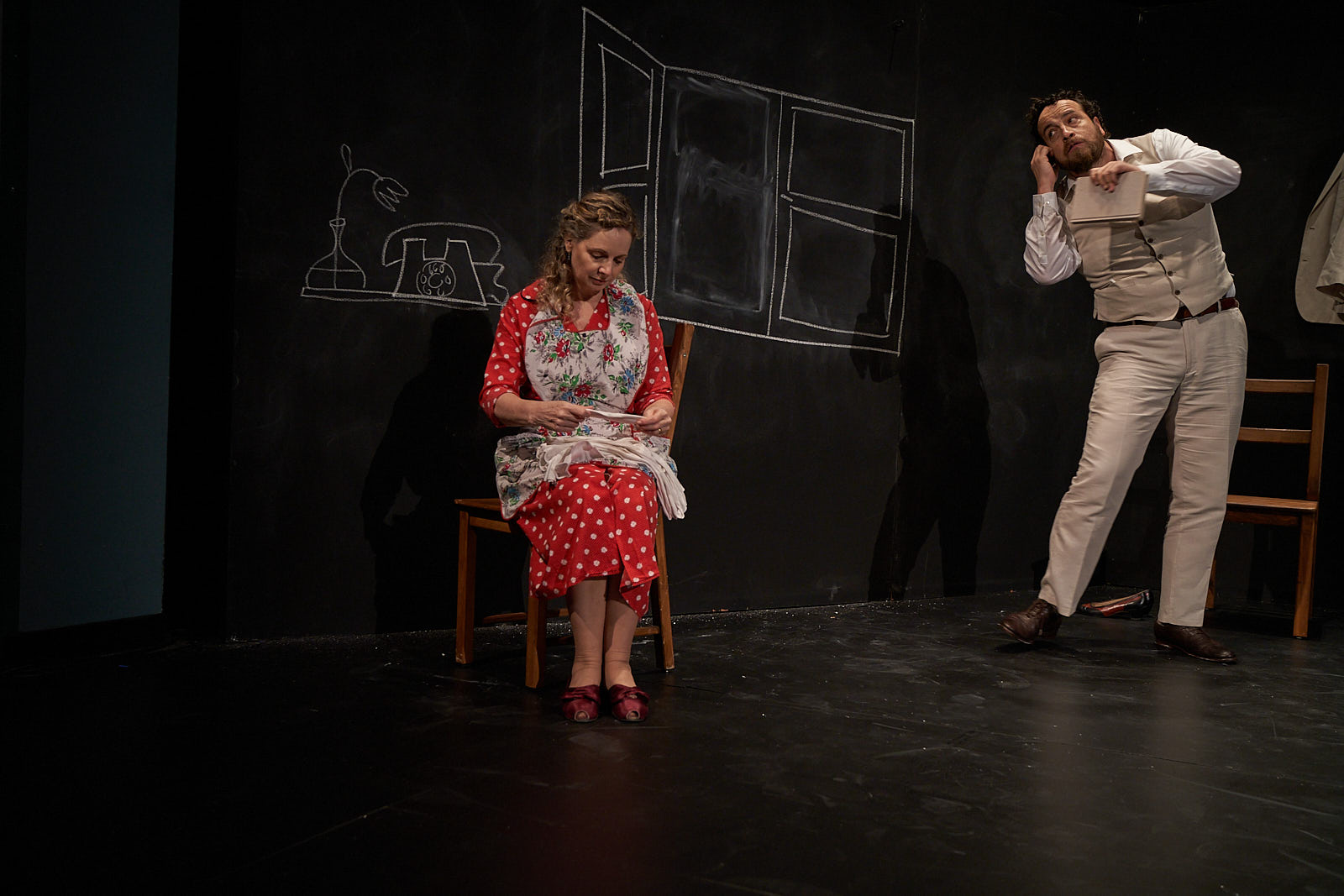 Ana Graham as Antonietta and Antonio Vega as Gabriele in “A Special Day” presented by Miami New Drama. (Photo by Ernesto Sempoll)

The one-act, two-person play “A Special Day,” currently being presented by Miami New Drama at the Colony Theater, is a minimalist play that is big on imagination and creativity.

Michel Hausmann, founder and artistic director of Miami New Drama decided now was the time to give Miami’s theater lovers a presentation for free.

While contemplating what to do until their season officially begins in December, Hausmann says he “felt that this was the moment to give something back to the theater community. This is a moment in society where we turned the tables and we felt Miami needs a gift so — hey, this next one’s on us.”

The ongoing pandemic was a major factor in his decision. Knowing everyone has faced challenges, from dealing with grief and financial uncertainty to the endless virtual classes and meetings, a return engagement of A Special Day felt right.

“We decided on a show we could bring back logistically speaking, since it has minimal sets,” said Hausmann.

Based on the 1977 Oscar-winning Italian film “Una Giornata Particolare” by Ettore Scola and presented by Por Piedad Teatro, the story is brought to life by actors Ana Graham and Antonio Vega in the roles of Antonietta and Gabriele. The two Mexican actors also directed the production where they play Italians in multiple roles.

Vega sets the tone for the play by letting the audience in on this fact as a great icebreaker and introduction to what will soon unfold on stage.

As the title implies, the story takes place over one day, in this story’s case it is May 8, 1938 the day that marked Italy’s celebration of fascism and also the day Adolf Hitler came to visit Italy’s Prime Minister Benito Mussolini. 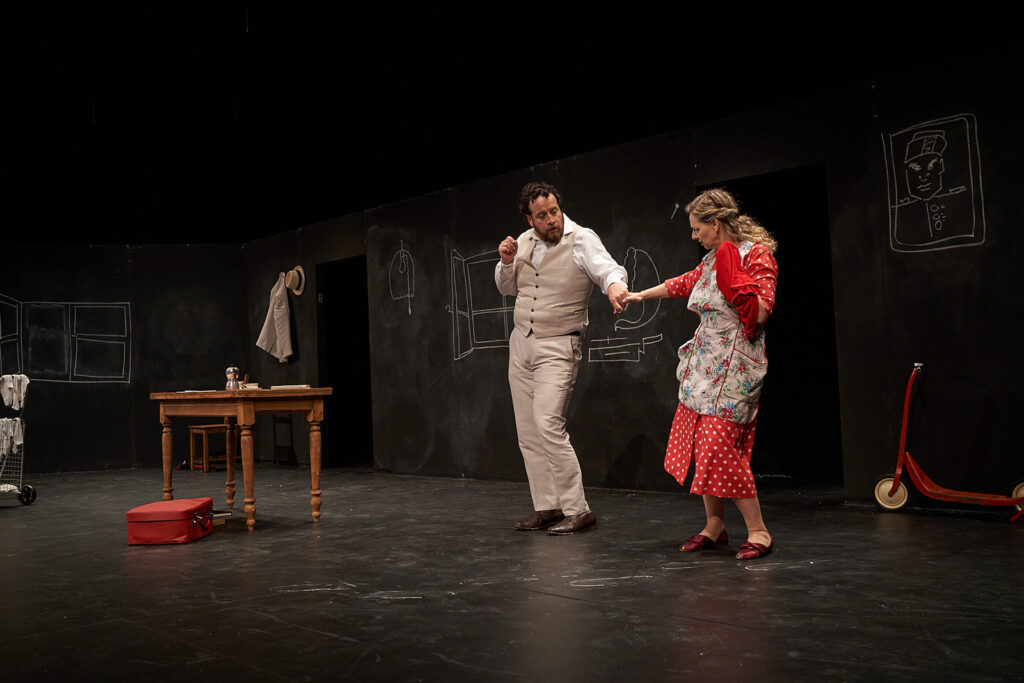 Ana Graham and Antonio Vega share a dance as Antonietta and Gabriele in “A Special Day.” (Photo by Ernesto Sempoll)

At first the set seems quite bare, a few chairs upturned on a table and hanging black chalkboards, but that’s the beauty of the minimalist set. Antonietta is a bored housewife going about her mundane tasks at home who meets Gabriele, a persecuted journalist. Little by little, Gabriele’s charm, wit and ultimate secret present Antonietta with the day’s distraction, taking the audience through the highs and lows of their own lives as well as those of the world outside.

The two distract each other with conversation, dance, peeks out the window at the parade passing by, while her parrot tries to escape its cage.

That cage, the windows, a mirror, kitchen utensils, a stove and more are imaginatively created by the two actors using chalk on the hanging blackboards. Their artistic talent expands beyond their roles on stage and keeps the audience intrigued as to what prop they’ll draw next. Aside from the drawings, the two share duties actually playing the props like a doorbell ringing, the parrot squawking and other assorted noises. 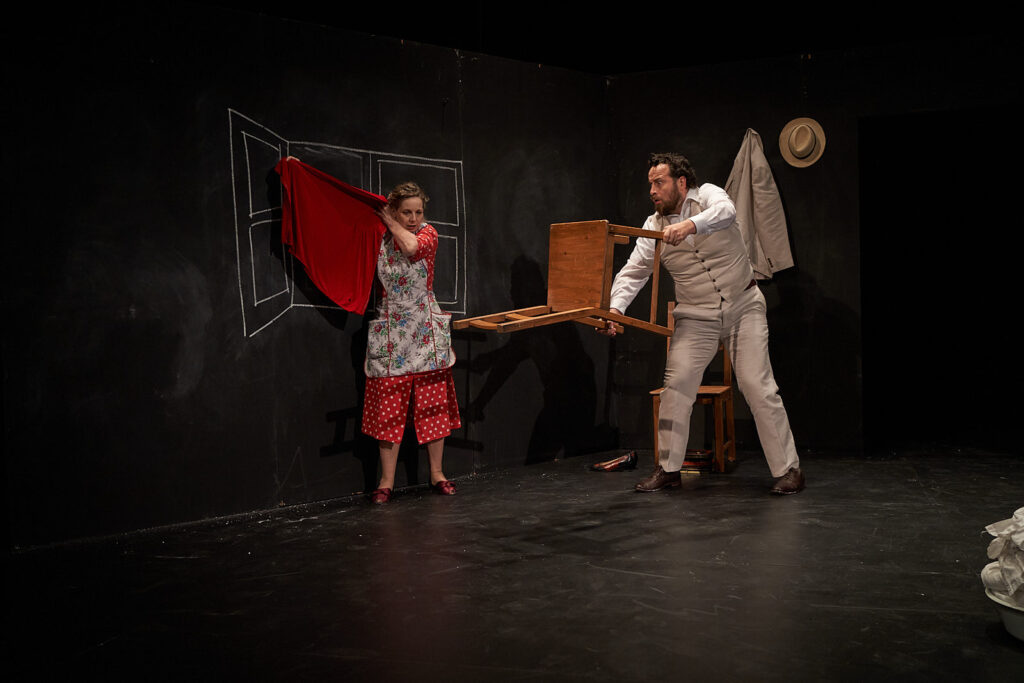 Antonietta and Gabriele try to catch the bird in a scene from “A Special Day.” (Photo by Ernesto Sempoll)

Hausmann feels that both the form and content work with A Special Day.

“I think the theater’s at its best when it invites the audience into a conversation and journey together and I feel this play exceeds those expectations,” he said. “The visual work the actors do with the chalk in hand and playing all the multiple characters presented in the one act play is genius.”

Ultimately says Hausmann, “this is a show about the dangers of fascism but also about the resilience of love and hope and it’s a feeling that needs to be shared for this moment.”

Miami New Drama’s upcoming 2021-22 season which begins in December with the world premiere of A Wonderful World, which was set to begin in March of 2020, will feature only world premiere plays.

That is Hausmann’s style, setting the bar high. At the height of the pandemic the work continued, as they presented Seven Deadly Sins along Lincoln Road with actors playing their scenes behind the glass of storefronts along the street while attendees watched from socially distanced chairs on the street.

“Part of it, in general, is that we see theater itself in a role as an active and important member of society and that artists should help lead the conversation. It was the reason behind doing Seven Deadly Sins during the height of the pandemic,” he said.

It will be exhilarating when Miami New Drama finally welcomes their production of A Wonderful World to the stage in December given the set has sat dormant for more than a year.

FREE but tickets must be reserved prior to the show