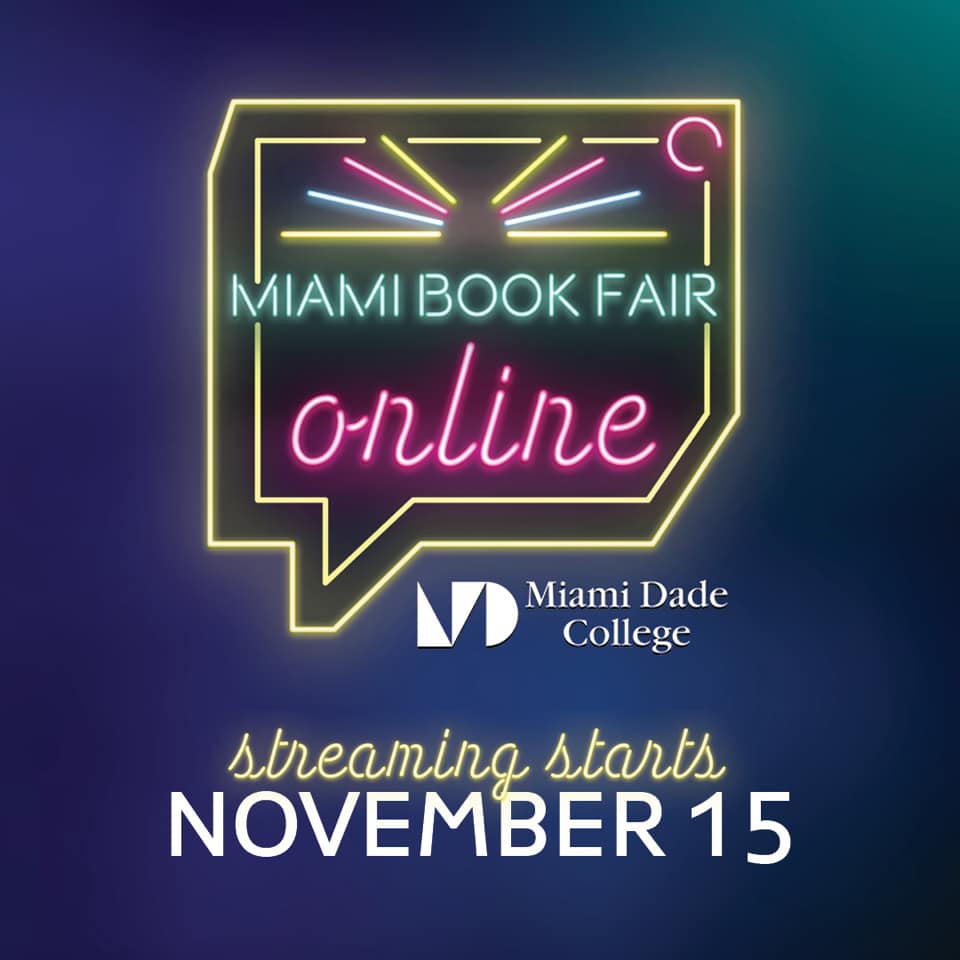 Unfortunately, for the first time ever, the event is going entirely virtual which isn’t all bad news since that means even bigger audiences. This year’s event happens Nov. 15-22.

“What excites me the most about Miami Book Fair Online is the opportunity to reach even more people on a local, national, and international level,” said Natalia Crujeiras, director of Cultural Affairs for Miami Dade College. “I also believe the Miami Book Fair Online experience will bring the same quality and diversity of authors, genres, and themes that have made Miami Book Fair the best book festival in the country and a source of pride for our community.”

In March when the shutdown began, “we were right in the middle of our Big Read event and we had to shut that down,” said Lissette Mendez, director of programs for the Book Fair. “Also, March is usually when I go to New York to meet with publishers so we can start building the Book Fair program.”

Luckily, she was able to conduct all her meetings by phone “and authors were still confirming saying they wanted to launch their book at the fair, even though the future was unknown.” 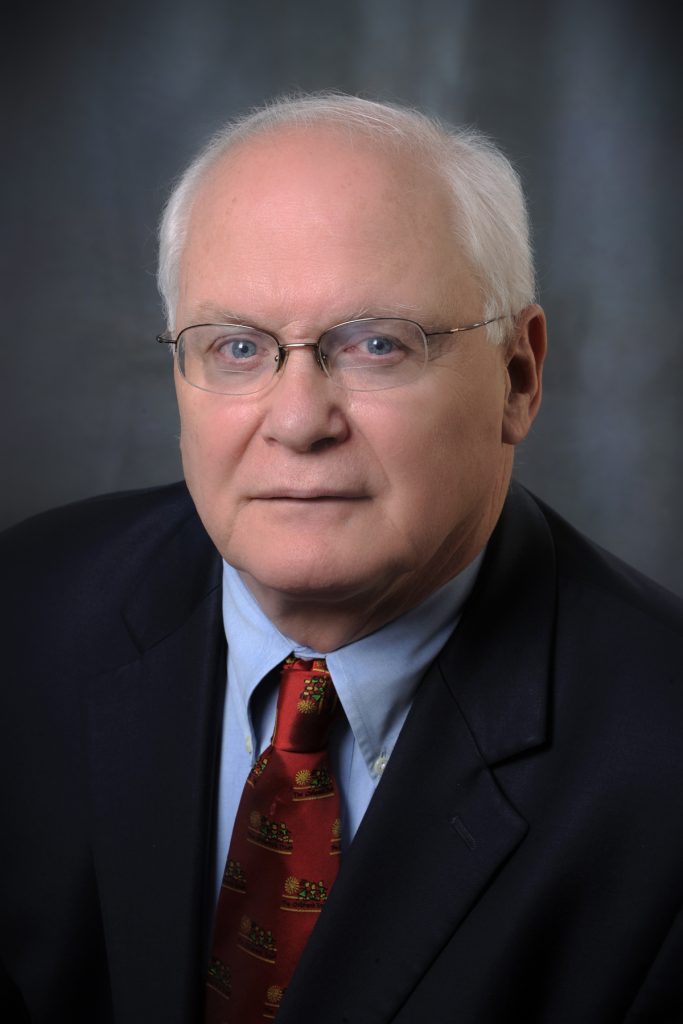 Within two weeks of the shutdown they discovered Crowdcast, a service similar to Skype and the now popular Zoom. “We chose Crowdcast because it’s very intuitive and by the beginning of April we were ready to use it.”

Once this was set, the wheels started turning on “how to bring solace to people and give them something at home to connect to their lives plus, continue bringing them the content they’ve always loved,” Mendez said.

They tested the Crowdcast platform in April with a few different authors, including Miami’s own poet laureate Richard Blanco and quickly began planning for Miami Book Fair at Home.

“As we continued to work through Crowdcast, we were also watching the Hay Festival, a writer’s festival that was one of the first ones to go entirely online,” said Mendez. “We were inspired by what they and others were doing to continue the work.”

Throughout this transition they continued working with Books & Books on author programming and presentations.

Experiencing a few technical issues with Crowdcast, during the planning of their Little Haiti Book Festival in June, Mendez says “I had to work with the web developer to ensure the program didn’t fall apart right in the middle of programming because connection in Haiti is just not as good as in the U.S.” 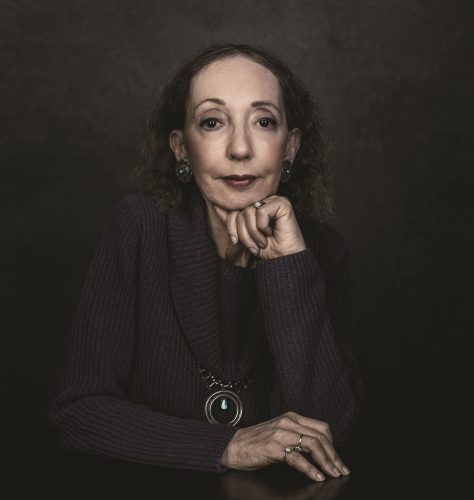 Joyce Carol Oates, a regular at the Miami Book Fair, returns for the 2020 virtual event. Photo by Dustin Cohen.

They turned to the web developer again for the annual Storybook Picnic de Libros held in July to “address the question of how we were going to bridge the gap we would have in presenting the event,” said Mendez. Once again, they had success in presenting this event virtually.

Once it was determined the Book Fair would be entirely virtual “we looked at the problems we had as well as what worked really well,” said Lissette. “We quickly realized the need to create a totally secure platform and website to prevent any insecure videos of our authors, something that was a concern, as well as the security of any children watching. We also had to incorporate live events into the programming.”

Brainstorming sessions also resulted in the creation of Netflix for Books, this way “people could watch anything they’d missed at the Book Fair. It was also the answer to the request I’ve received for years from attendees who always tell me ‘I can’t be in two rooms at once’,” said Mendez. “This year, they can watch any programs they want on demand.”

Then came the task of creating a website for an all-virtual event. The Book Fair always has a user-friendly site with great planning tools for attendees, and this year’s site is no exception. It has been expanded to include an all-encompassing home page, as well as viewing and marketplace pages.

“From the home page, the layout presents different events in a graphic way, featuring author photos and descriptions as tiles on your page,” said Mendez. “Attendees can also find programming by genre, browse by day and look at the authors in alphabetical order.”

Additionally, the Marketplace section features a list of all the vendors who would have been at the street fair, while the children’s area was inspired by the always popular street fair’s Children’s Alley.

“The Miami Book Fair Marketplace will allow businesses, independent book sellers, and other vendors to showcase their products and content, just like they would have done with the booths at the street fair,” said Crujeiras.

Mendez goes on to say, “the idea from a programming point of view was to be inspired by the actual book fair and transform that same energy and excitement to this online platform, that was our main goal.”

Crujeiras applauds the team saying “they have put together a solid and diverse program that everyone will be able to enjoy, for free, in the comfort and safety of their homes. We are also offering new and fun experiences, like the Here in Florida section to highlight authors and books from/about Florida, as well as local artists.”

Making the website easy to maintain was also important because “it enables us to present events simultaneously as well as keep our online presence going year-round, regardless of what happens,” she said. “It’s our way of presenting literary culture around the world. We have always wanted to bring attention to writers in translation and I think literature and translation is something we can create fabulously online. Having people Zooming in from all over the world!”

“Then from Nov. 1 on, the website will be fully operational and at this point people can personalize their own Book Fair experience so they’re ready for when the first events are available to watch on Nov. 15,” said Lissette. “We are asking people to sign on with their e-mail so we can send them updates as authors and readings become announced.”

Fairgoers who love the printed Fairgoers Guide can find it in the New York Times Sunday edition, the local weekly Biscayne Times and at Miami-Dade Public Libraries as well as at Books & Books locations.

Crujeiras says she is “extremely proud of the agility and creativity with which the Miami Book Fair team completely transformed our program from a mainly on-site event model to a multimedia production house. These have been difficult months of long days, working through the evenings and weekends, lots of experimenting, and incredible growth.”

She goes on to say that “the team is small but has a true sense of mission, is passionate and absolutely dedicated. They embraced every challenge as an opportunity to innovate. The new website is beautifully designed, user friendly and adaptable to the users’ interest, just like a Netflix or Hulu would be.”

Click here to visit the Miami Book Fair site and sign up for regular updates on confirmed authors and events.