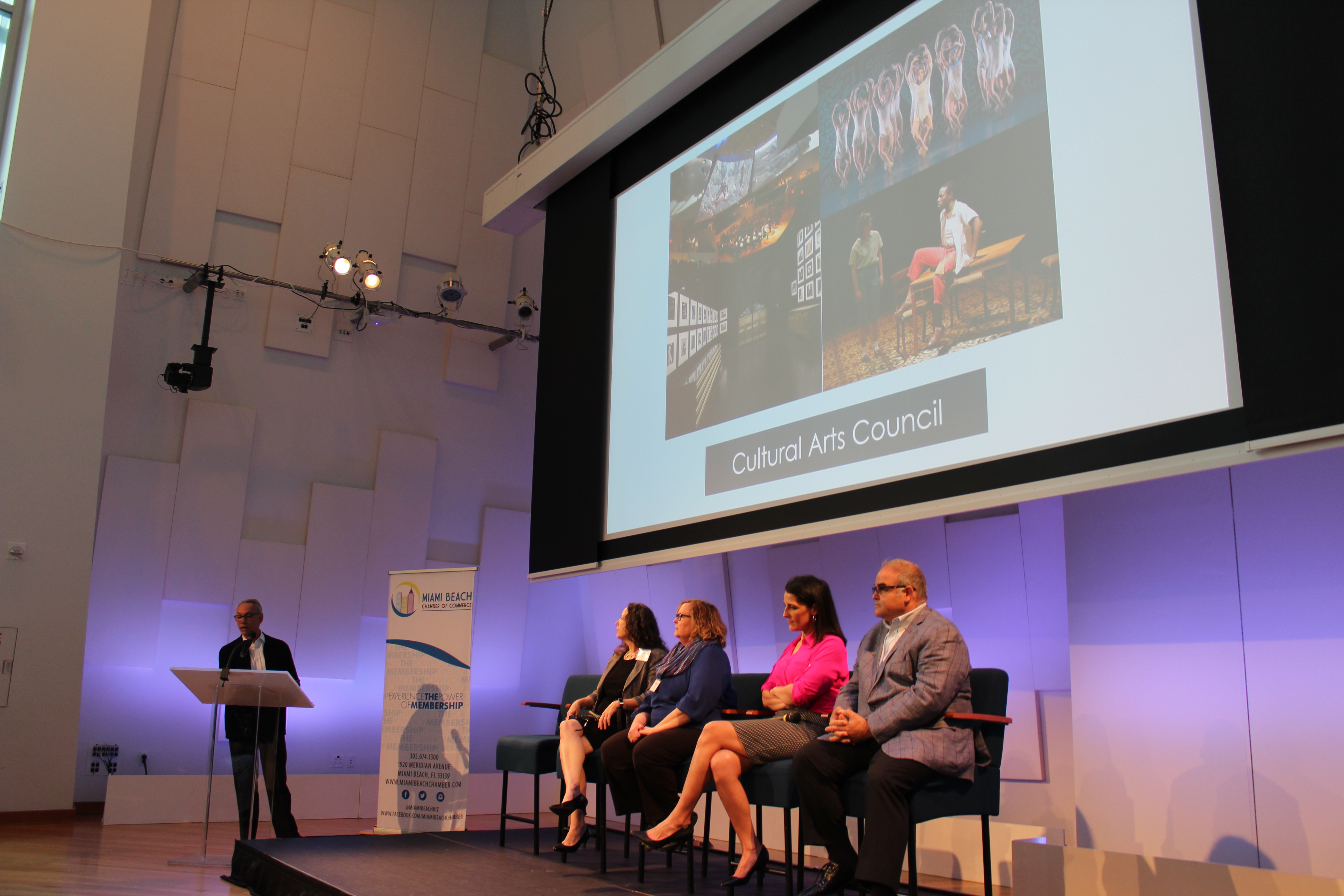 A powerhouse group from Miami-Dade’s arts community gathered at the stunning New World Center on Friday, March 15th, as part of the Miami Beach Chamber of Commerce’s Salute to the Arts program.

They spoke of the exciting plans for the future from their respective arts organizations, electrifying a room filled with members of the Miami-Dade arts community and Miami Beach business community.

City of Miami Beach Mayor Dan Gelber shared the importance of incorporating the arts as part of the existing STEM (Science, Technology, Engineering, and Mathematics) programming and introduced a new program focusing on STEAM, created in partnership with Alberto Carvalho, Superintendent for Miami-Dade County Public Schools. “We’re creating arts curriculum at our schools where members of our arts organizations are teaching during the school day. We’re considering this a pilot program,” he explained, “that we’re hoping to replicate across the entire Miami-Dade County public school system.”

Continuing his advocacy efforts to propel the Miami-Dade County Department of Cultural Affairs to even greater heights, Chairman Xavier Cortada says, “our goal is to take our place in the hemisphere’s greatest arts communities by building world-class facilities that can compete with the best in the world.” He went on to say, “at the end of the day it’s about building community and creating programs to engage residents and visitors, because the arts are good for business.”

At the Arts & Business Council of Miami, with 30+ years of work aiding more than 500 arts groups in various capacities, President & CEO Laura Bruney echoed Cortada’s words saying, “a strong cultural community is good for business,” and went on to explain how the arts can help businesses to recruit and keep top talent.  The Council’s focus is to “encourage people to live creatively for a better life. Finding ways to engage both the arts and business sides to learn to be profitable and help each other grow.”

Making a strong statement to kick off her presentation, Suzette Espinosa, vice president of Communications for the Adrienne Arsht Center says, “what this world really needs right now is the arts.” Always focused on attracting the cultural tourist to the arts venue she says, “we’re committed to making sure the next generation is blessed with the arts in their lives and continually building the arts community.” She also highlighted the planned Community Bridge coming to Downtown Miami that will connect the north and south sides of Downtown “so we can become a connected community,” she says.

Closing out the morning was Catherine Cathers, City of Coral Gables Arts and Culture Specialist of Historical Resources and Cultural Arts Department, who says “as administrators, we depend on the volunteer stewardship of City Commissioners and the Mayor.”

They make all this possible she says, “with the help of the Coral Gables Chamber of Commerce which is a very dear partner to us as well as the essential relationships between government, public and private sector.”

The Miami Beach Chamber of Commerce closed the event with a promise to do more of these kinds of events. You can learn more about their organization and upcoming events at miamibeachchamber.com.