Making a difference in the lives of displaced Venezuelan kids 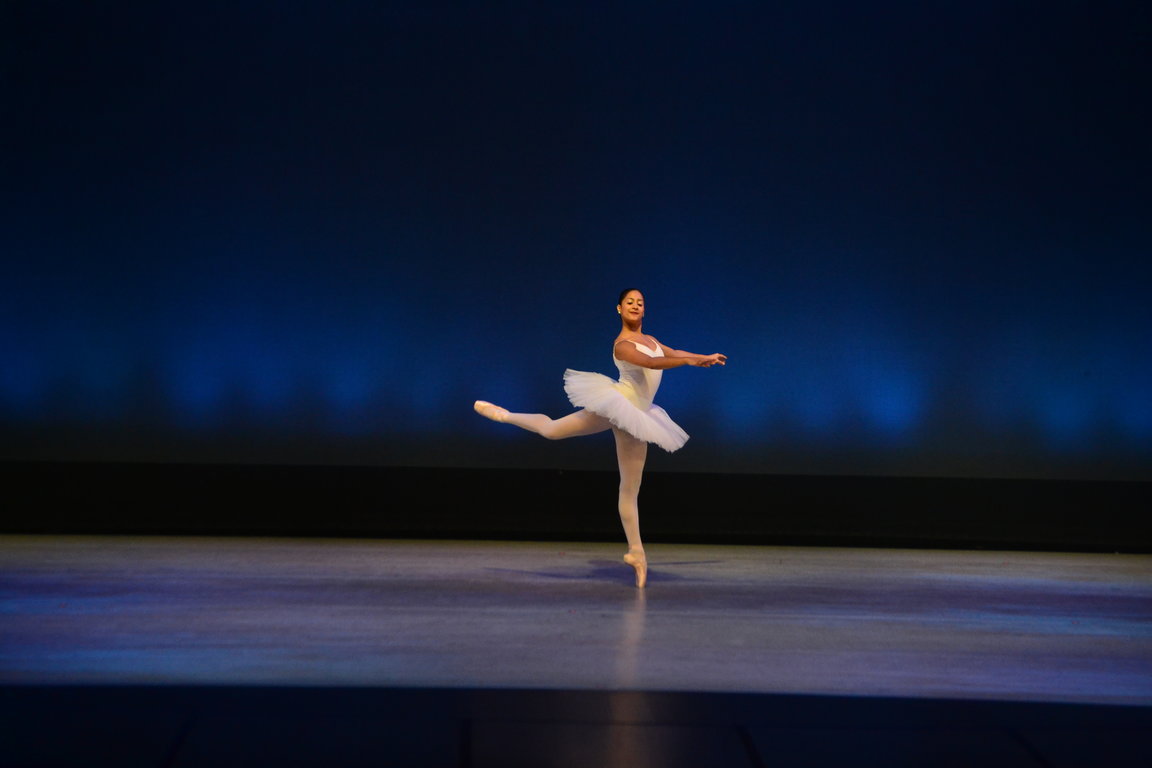 The arts matter in so many ways, helping children to perform better in school and become well rounded adults; the arts can also make a difference in the lives of displaced children. With the current plight in Venezuela, helping children adjust to life in the United States has never been more important.

Heeding that call are Juan Carlos Gonzalez, Executive Director and Taimy Balbuzano, Artistic Director of Musicall, along with Ruby Romero Issaev, co-founder of Arts Ballet Theatre of Florida. Because of their personal stories, their hearts go out to those displaced children and they’re welcoming them into their respective programs to help them acclimate to life in a new country.

“Honestly, it is a sense of accomplishment, but at the same time we strongly feel that it is our responsibility,” said Gonzalez and Balbuzano. “We are immigrants; we know exactly what they feel and what they are going through. These children have left their culture, homeland, friends, schools, families, language.”

Romero Issaev echoes those thoughts saying “I am Venezuelan. I came to the United States 22 years ago, two years before the heavy political crisis in Venezuela began.

I come from a family of renowned artists in Venezuela, particularly my father Aldemaro Romero, a musician-composer and orchestra conductor highly recognized, who passed away in 2007,” she said.

“Upon his arrival in Venezuela, fleeing Russia during the glasnost from the USSR, Vladimir discovered what the word freedom meant. Later, while working with Vicente Nebrada of the National Ballet of Venezuela, he says he also discovered what freedom of movement was,” said Ruby.

Welcoming the children to Musicall was the perfect fit. The program’s foundation is to guarantee access to a high-quality music program to all children in the community, regardless of economic limitation, medical condition, race or ethnicity.

“The idea of our program started back in 2007 through regular music classes in several Miami schools. We realized the power that basic knowledge of music can have in transforming a child’s life,” said Gonzalez. “We saw dramatic improvement in subjects such as mathematics and language once they started to receive music instruction.”

Many of the Venezuelan children and teens now in the program were involved in music in their home countries. Their resourceful parents found out about Musicall and enrolled them, while others have joined through their afterschool program at Miami Jackson Senior High. , Sponsored by The Children’s Trust, the program at the high school is specifically designed for recent emigrants. “Since we accept all youth, something magical has happened,” says Gonzalez.

He’s referring to a group of English-speaking teenagers who have joined the program and communicate with the Venezuelan children with through bilingual participants. Besides learning music, the emigrant children also receive social-emotional learning and academic support and the integration between both groups he says, “is just amazing. Something similar occurs when they come to our community program, these families feel safe and accepted in an inviting environment.”

During the summer, the program participants attended several field trips including “Puss in Boots” at The Actors’ Playhouse and “Frozen Junior” the musical at South Miami-Dade Cultural Arts Center, visited Zoo Miami, and were also part of Musicall’s Summer Concert, “where they had the opportunity to perform for friends and families showing what they learned and worked on during the Summer Camp,” said Balbuzano. 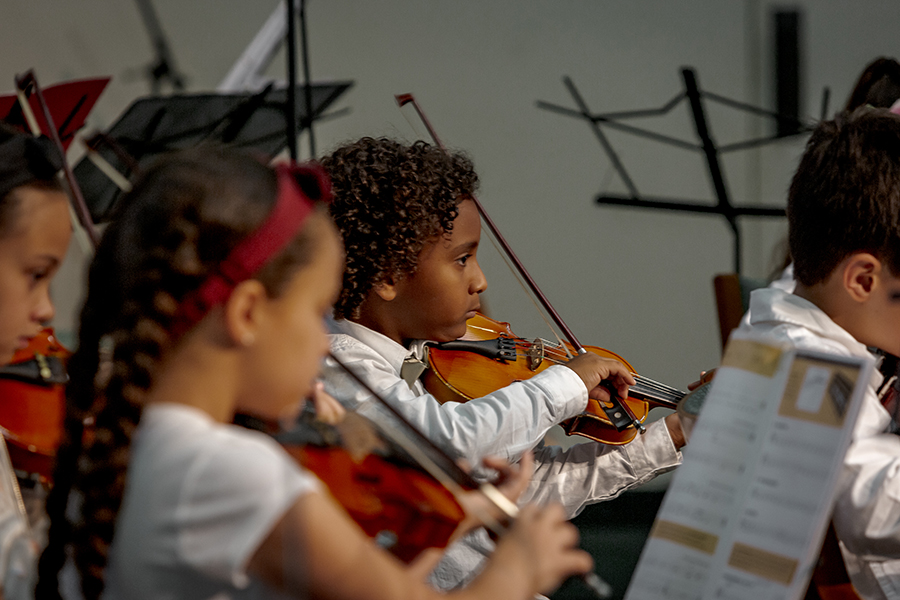 Children practicing in the Musicall program. Photo courtesy of Musicall.

Given their ties to Venezuela, Ruby and Vladimir of Art Ballet Theatre of Florida have always been very concerned about the situation of those families escaping from the situation in Venezuela.

“When we left Venezuela, we were established and recognized in the artistic community, especially Vladimir who, in his decade as Ballet Master in Venezuela, trained many young dancers who later became professional dancers,” said Ruby.

Once the communist regime began in Venezuela, some of those dancers followed Vladimir to Miami and asked for his help with introductions to key people in the dance community and with auditions. Many of them are now teachers and part of the Venezuelan diaspora around the world.

“As the crisis increased, old friends in Venezuela – including ballet teachers or former dancers – began to recommend their students to our studios and contacted us to see if we could help; our answer was always yes,” she said.

Because of this, there are numerous touching and inspiring stories of dancers thriving in the Arts Ballet Theatre program.

There’s Maria Fernanda Papa who started ballet with them at age 7 and is now 16 and is an accomplished dancer attending the Summer Intensive on full scholarship. Also, Lusian Hernandez, who in July 2011, won a scholarship to the summer program at just 15 years old.  “She did such a fantastic job and asked permission to stay for the length of her Visa, so Vladimir extended the scholarship until December when she had to go back to Venezuela to finish high school,” said Ruby.

Six months later, she graduated and the next day she was back. Lusian eventually graduated with them and now at 25 years old is a soloist of Arts Ballet Theatre of Florida.

There are dozens more stories; currently there are eight children from Venezuela under scholarship and Lusian and Maylen are working during the Summer Program. Aside from students enrolled in their program, Ruby and Vladimir have helped with housing and plane tickets – virtually any way they can.

The work is never done. Both Musicall and Arts Ballet Theatre will continue this important work of providing opportunities for the displaced children because it’s part of the fabric of their programs and of their own lives. They are deeply grateful to The Children’s Trust and the Miami-Dade Department of Cultural Affairs, who realize  the importance of their work and provide financial support.

“Meaningful arts experiences can be transcendental and summer camps that focus on the universal language of the arts offer these young people a happy, friendly and safe haven where they can enhance their creative skills and thrive,” said Katherine Revell, cultural projects administrator with the Miami-Dade County Department of Cultural Affairs. “Our Summer Arts and Science Camps for Kids Grants Program, funded by The Children’s Trust, supports many outstanding nonprofit organizations that are serving kids who are new to Miami.”

“Music should be part of the integral education of every child. Music not only benefits children to advance academically but to have a new purpose, to become a part of our society with confidence,” said Juan Carlos and Taimy. “Through music education, immigrant students find college scholarship opportunities. Musicall’s role is to educate and walk side by side with these children and guide them through college.”

They go on to explain how the program is also providing them with social awareness and positive peer pressure, allowing them to make new friends and learn the English language in a non-stressful environment.

Ruby said, “the effect is just incredible. The parents have done everything possible to protect them from the memories and horrors in Venezuela. The very young ones just speak candidly about the situation while the older ones are more aware and understand they need to help… but once in the studio, the world becomes dance, the dreams become true and there is no pressure for them to do what anything more than what they love to do. The parents feel they are protected here.”

As an homage to the plight of the many Venezuelan participants in their program, Arts Ballet will begin its season with a piece dedicated to Venezuela, featuring choreography by Vladimir and music by Ruby’s father to be performed by the Kameristika Chamber Orchestra made up entirely of Venezuelan musicians.

Next up for Arts Ballet Theatre of Florida is a performance on July 26, visit their website for more info and click here for info on year-round programming at Musicall.

Top photo is of Lusian Hernandez performing at Arts Ballet Theatre of Florida. Photo courtesy of ABT Florida.

Julia Tuttle, the Mother of Miami, is just days away from being homeless.
Continue Reading