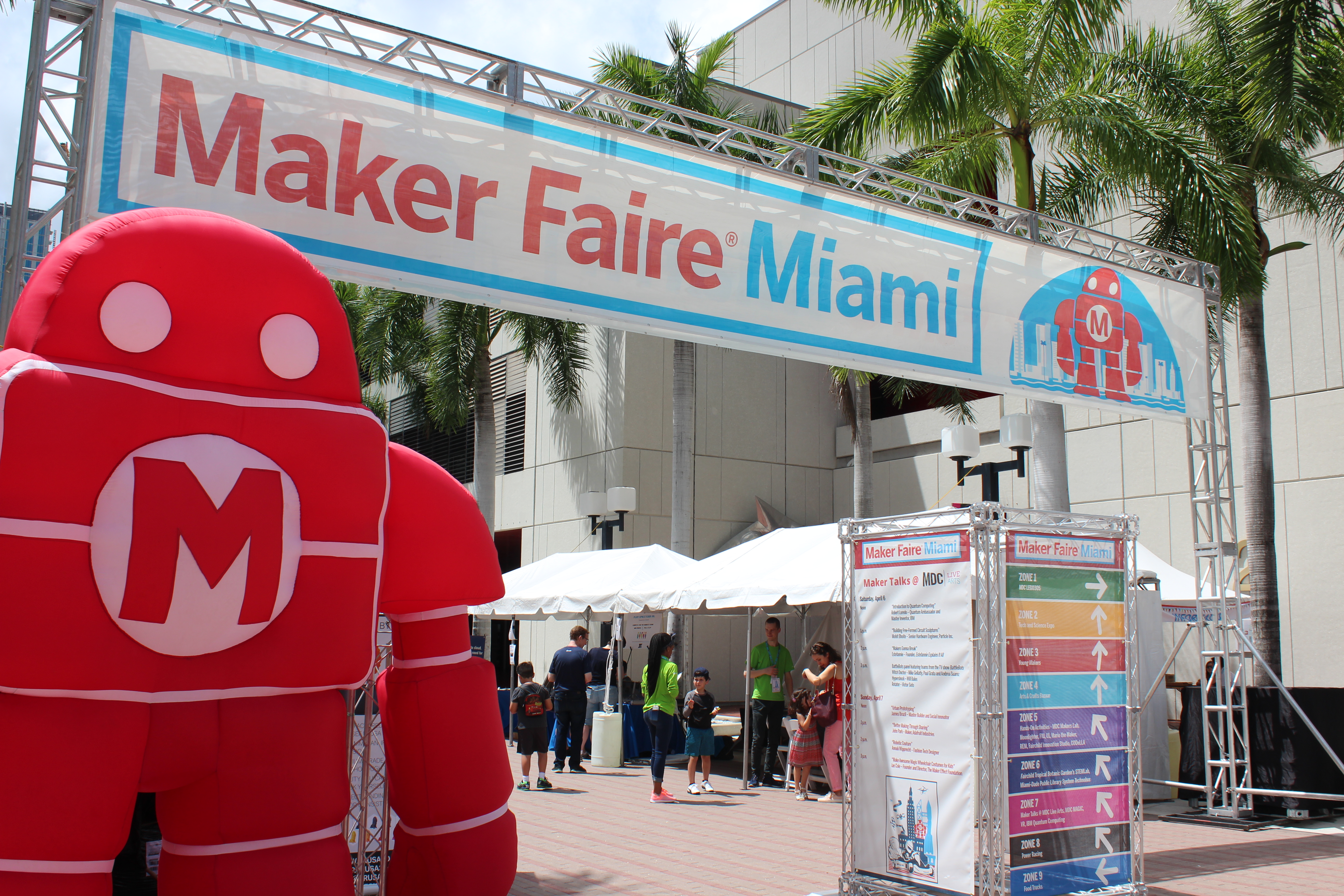 The first Maker Faire was in 2006, “in the San Francisco Bay Area as a project of the editors of Make: magazine.” Maker Faire Miami started in Miami in 2013, founded by MANO Americas, and is celebrating its 6th year of showcasing “fascinating, curious people who enjoy learning and who love sharing what they can do.” (miami.makerfaire.com)

This year’s fair was well organized with gleaming white tents lining the promenade that runs through the Wolfson Campus in downtown Miami. I was excited to jump in and take part in the experiences offered in Nine “Zones” laid out with a different emphasis in each. The tents stretched across the main campus, plus there were scheduled talks hosted at MDC Live Arts and Power Racing, a winding go-kart racetrack taking up the southwest corner of Wolfson campus. Miami-Dade County Public Library System had their large “Techobus” was also onsite. A converted “bookmobile,” the Technobus offers a mobile computer lab to a newer, tech-savvy generation of readers.

The fair hosted a long list of makers, with everything from education, arts and crafts, food, coding, science, robotics and more. Zones 2, 3 and 4 stretched along the Wolfson campus promenade, featuring the Tech and Science Expo, Young Makers, and Arts & Crafts Bazaar. A glance across this area revealed a wide variety of visitors, from families with small children, to awkward-aged teens, to grown-ups who never gave up on imagination and dreams. 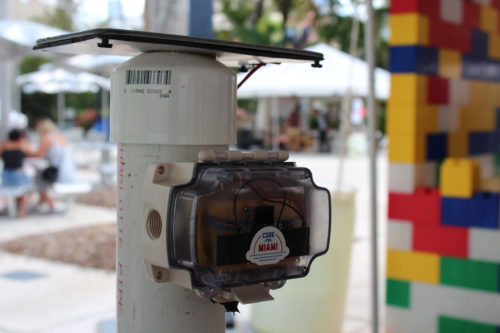 Zone 5 offered hands-on activities from MDC Makers Lab, Moonlighter, FIU, 01, Mario the Maker, REM, Fairchild Innovation Studio, and CODeLLA. Here I found Dan Guffy, a member of Code for Miami, sharing information about a prototype that detects and collects data on flood water levels. He showed me how the device works and explained that volunteer coders are working with the City of Miami and currently have 6 or so of these detectors ready to be put to use. The devices have sensors to measure the height of water, whether it be from rain, King Tides, or other flooding events, and are powered by solar panels at the top. When asked about the data and what happens to it, Guffy responded that Code for Miami is, “big on open data.” The organization’s website explains their members “build prototypes, advocate for open data, and support a community of people that are working on making Miami better.” Guffy explained that information from the flood detectors will be made available to the public once they are implemented. Code for Miami hosts regular meetups at CIC and are always glad to have new volunteers for their coding projects.

At the Moonlighter Makerspace booth I met Vicky Gonzalez, an illustrator with a degree from Ringling College of Art and Design. Vicky talked about the various projects and programs at the Fabrication Lab, Co-working space and STEAM Learning Center, located in Wynwood. A member of Moonlighter, Vicky started by renting laser cutters and other tools available to members and non-members. With the tools available, she is able to turn her illustrations into mass-produced objects such as intricate laser-cut invitations, whimsical jewelry, coasters, and more. As a Maker, she is able to bring her illustrations to life as products, in a way that allows her creativity to be accessible to more people through an Etsy site she calls creativecutout. 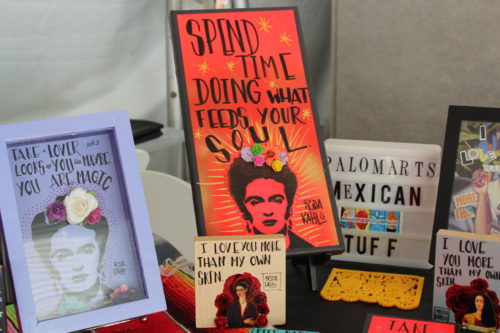 Paloma Dueñas’ booth for Palomarts caught my eye as I moved through Zone 2. Her booth was filled with objects of art and craft. She explains that she’s a multidisciplinary artist who creates work, collaborates with other artists, and offers jewelry and handicrafts from artisans from her hometown in Mexico. She offers up-cycled vintage jackets, as well as screen-printed T-shirts that have been embellished or altered by a local fashion designer. She also has photography with text added by friend and fellow artist RendaWriter. Almost everything she creates involves the artist Frida Kahlo, an artist whose work and persona is very popular right now. She tells me that she has participated in four of the six Maker Faires in Miami and has found that the event offers an important venue for selling her artisan works. Paloma, who holds a degree in music therapy and has been an artist teacher for many years, says she never expected to be making so much work in this way, but has found it provides her with a level of financial independence that allows her to make her own schedule and do what she loves.

With the amount of creatives, entrepreneurs, artists, and craftsmen in this town, it’s no surprise that the Maker Faire is celebrating its 6th year and continues to grow each year. If you didn’t get there this time, put it on your radar for next year. It’s a great way to support the Makers, Thinkers and Creative problem-solvers of Miami while meeting the Makers and Shakers that are leading the Maker Movement in Miami-Dade County.

Learn more about Maker Faire Miami at their website, https://miami.makerfaire.com. For more on the Maker Movement, and how you can get involved, visit Make.

All photos by Jean Blackwell Font