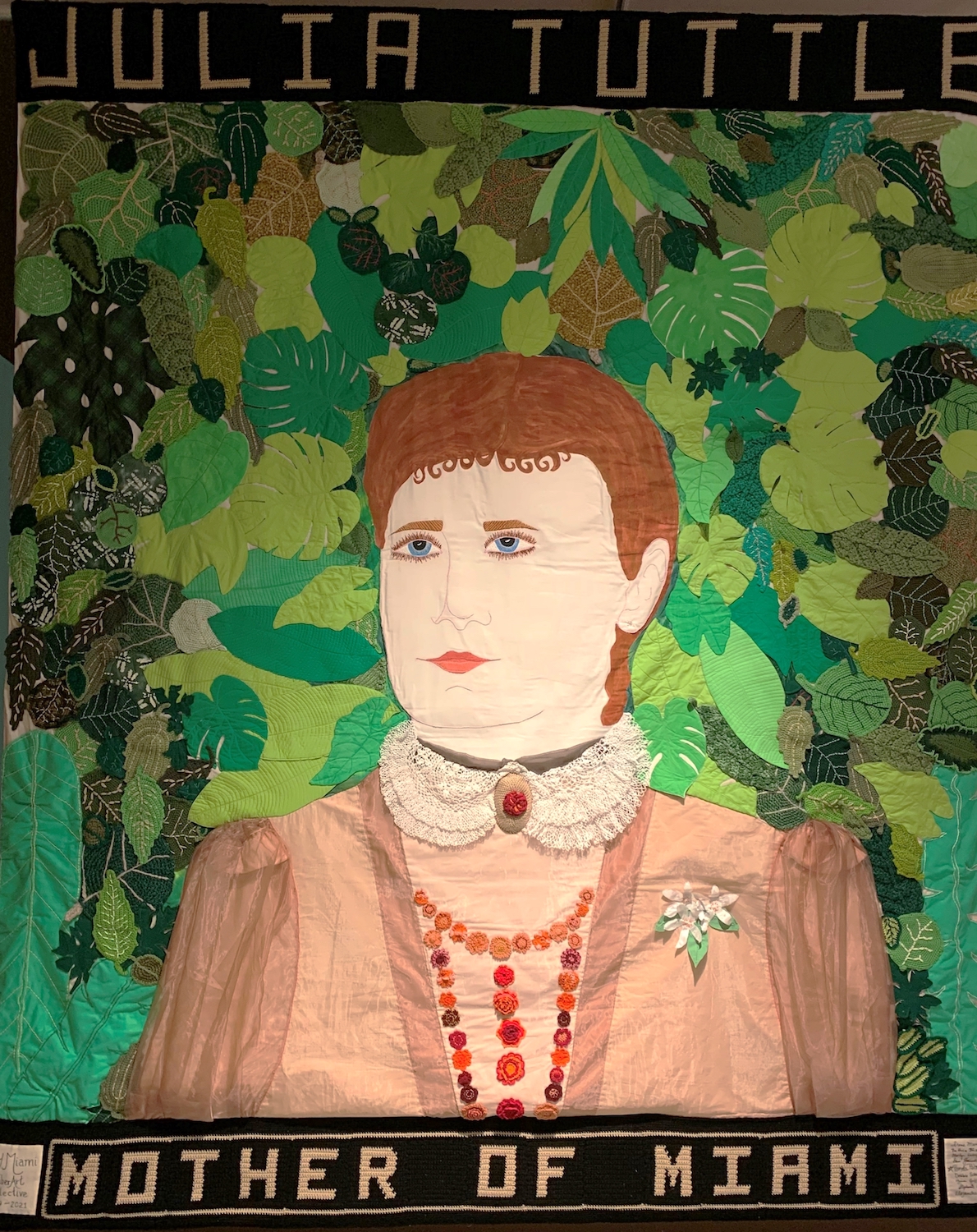 Would you let your mother go without a place to call home? Julia Tuttle, the Mother of Miami, is just days away from being homeless.

Julia Tuttle — The Mural is currently on display at the HistoryMiami Museum until the end of January; then she will not have a place to call home. Tuttle was quoted as saying, “It is the dream of my life to see this wilderness turned into a prosperous city;” if she supplied Flagler with the land to build a hotel and railway station that created the city we call home, can’t we find a place for her in the city she helped establish?

Julia Tuttle — The Mural is a labor of love by textile artist Pamela Palma and the textile artists from PLY-Miami Fiber Art Collective, a group that Palma founded in 2015. The group had been working on different projects, including the popular Yarn Bombings that were sweeping the country. But they wanted to do something bigger and more meaningful.

In 2019, billboard-size murals done completely in crochet were being created across the textile communities nationwide. She reached out on social media and attracted the attention of HistoryMiami Museum. The Museum said they were going to celebrate the 125th anniversary of the founding of Miami by honoring Julia Tuttle in 2021. And that is when the idea for a larger-than-life portrait of Julia Tuttle done totally in crochet was born; after all, they had two years to complete the work. They would reach out to the community for support and recruit all those interested in being part of the event and who knew how to crochet or wanted to learn to help them. Their original plan was to reach out to the girls’ scout troops, senior centers, and other groups.

In early 2020, with the project in its early stages, they met with the HistoryMiami Museum folks to see where the billboard-size mural would be displayed — then, COVID-19 happened. They quickly realized that it would not be possible to do the mural as originally planned. Everyone was in lockdown and they could not meet or work in close proximity to each other. The original idea of crocheting the mural could not take place. 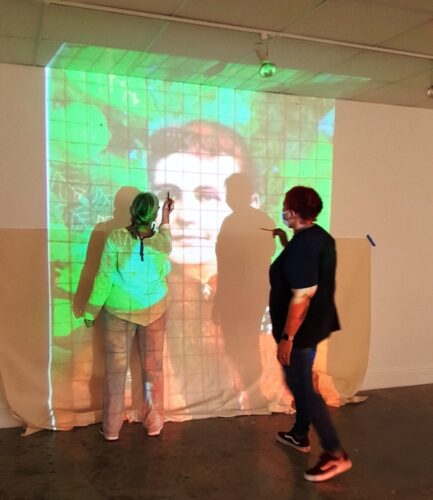 During the spring and summer of 2020, the PLY group continued to meet over Zoom, and Julia Tuttle was foremost on their minds. They had to think of a way to make it happen. And they did. They redesigned the project into something that each of them could do separately at home, and when they could meet in person again, they would assemble it. The entire design was changed and more colors were added, more Miami colors. They decided Julia would appear to emerge from a background of tropical leaves. The leaves would be something they each could do at home. It would be up to each artist to create them in the medium of their choice — crochet, knit, embroidery, sewn, and quilted. “Each member put her own stamp and her own ownership on the project,” said Palma.

They also resized it to be smaller. The textile art mural would now be 12-feet-by-12-feet to fit a specific wall at the HistoryMiami Museum. In December 2020, FIU offered them the use of one of their galleries over the winter break for them to sketch the massive project. They were on their way again. 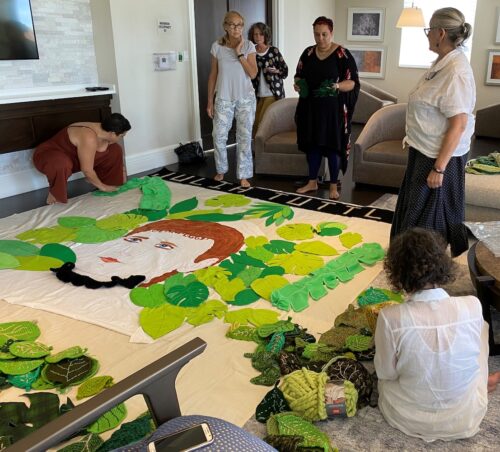 In April 2021, the group, all vaccinated and masked, got together to begin work on the project at the HistoryMiami Museum. The nine textile artists worked tirelessly from April through June, four days a week, arranging and sewing the leaves that would serve as the background. It took them 10-weeks to hand stitch the entire mural.

All the artists worked meticulously to bring Julia to life. Palma embroidered Julia’s facial features, painted her hair and quilted her face for depth and dimension. For the dress, they gave her an elegant look. Another artist crocheted the letters on the mural. The group wanted to bring recognition to the importance of traditional women’s work and the important role textiles play in our everyday lives. 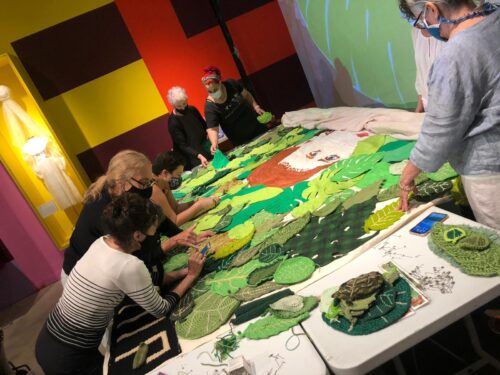 “Textiles had a really important part in our survival in 2020. I would talk to people and they would say, ‘I don’t know what to do, I’m so afraid to go outside my house,’ “ said Palma. Being part of PLY gave them something positive to focus on and take their attention away from what was happening around them. As a group, PLY met monthly over Zoom to think of projects they could do that would have a positive impact on others.

One project was to crochet bird nests for the Pelican Harbor Seabird Station. They needed nests for the many injured baby birds they were rehabilitating. They crochet over 100 nests. After that project was completed, they created masks with whatever materials they had at home. Then, with the passing of Supreme Court Judge Ruth Bader Ginsburg, they made jabots in her honor to wear to the November elections. 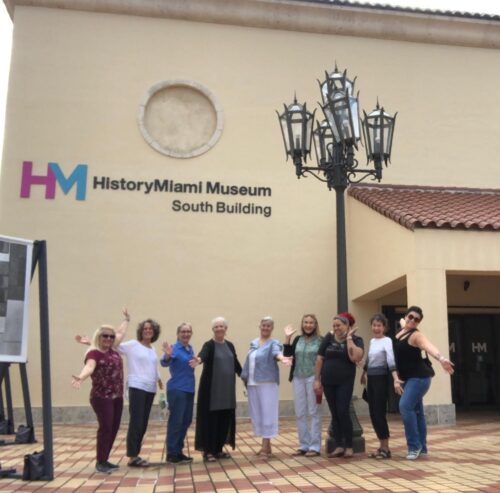 If you would like to be part of this creative, talented group, membership for 2022 is now open at PLY. The group meets monthly to work on projects that will challenge your talents and you’ll learn new techniques. They plan to stay on the theme of Women in Miami, but on a much smaller scale. If you are interested in textile work and being part of an elite group of women, visit their website at Pamela Palma Designs or email Pamela at 1pamelapalma@gmail.com.

If you know of a potential home for Julia Tuttle — The Mural, please contact Pamela via her email at 1pamelapalma@gmail.com.