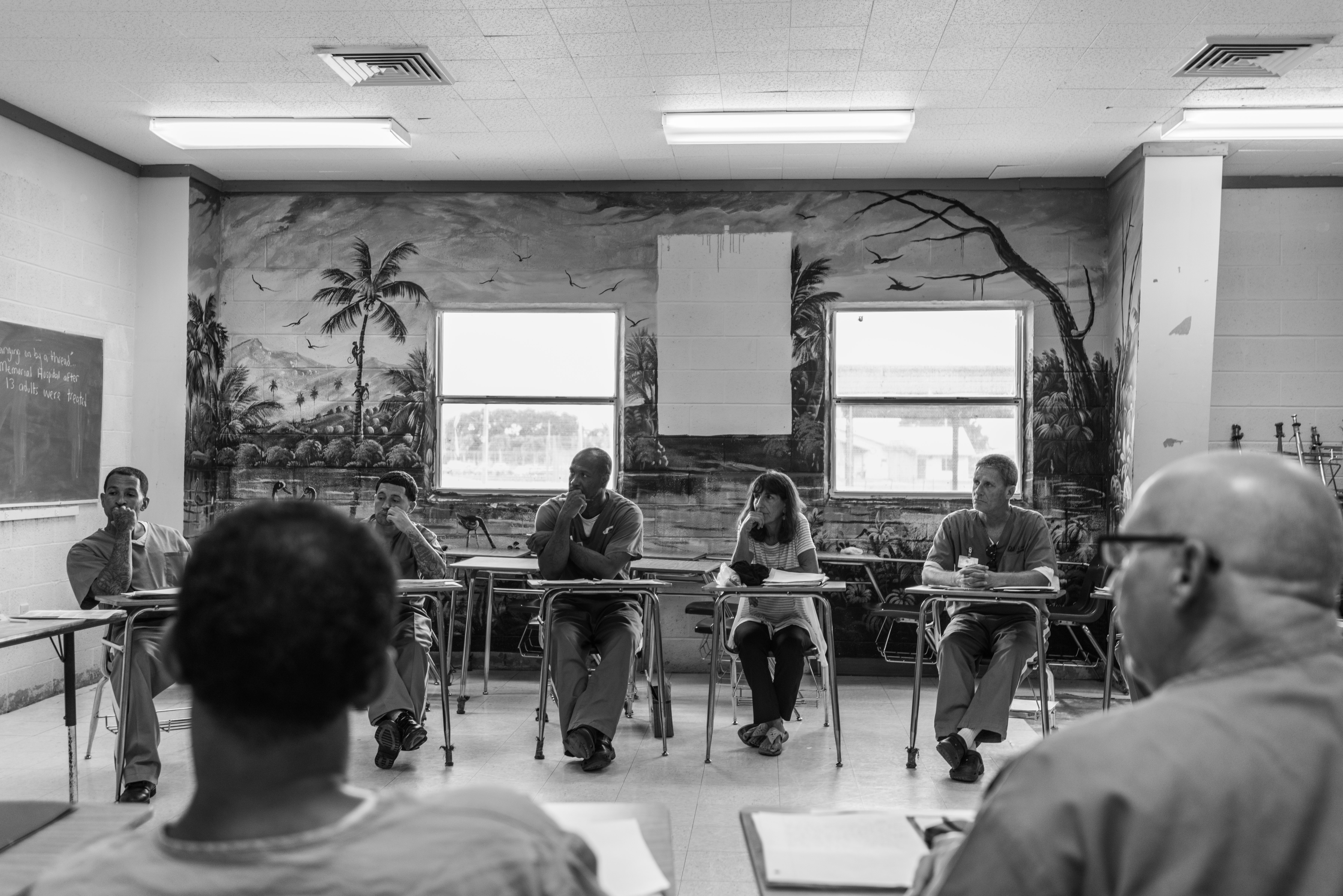 Six years ago, Kathie Klarreich, a former print, radio and broadcast journalist created the Exchange for Change prisoner writing program. From humble beginnings of a mere 17 students, the program has grown to reach more than 1,000 incarcerated students.

E4C, their acronym for Exchange for Change, is a non-profit that facilitates writing courses in South Florida prisons and their focus is two-fold: to provide better communication skills for incarcerated writers and to educate the public about who the incarcerated are. Klarreich clarifies this last point saying, “because we need to think of ourselves as one society.”

Way before 2014 and establishing Exchange for Change as a non-profit, she worked to launch a similar program in 2009 with Haitian women in prison. Klarreich has extensive experience with the plight of Haitian people, having worked as a journalist in the country on and off for nearly 15 years.

“I was a reporter there from 1978 to 1988; then, when the earthquake struck in 2009, I returned from 2010-2013 again as a journalist,” recounts Klarreich. “In 2009 I had approached an established program called ArtSpring – Arts for Healing and Social Change women’s prison here in South Florida to teach writing with Haitian women, but then I went back to Haiti.”

From that, grew the idea for Exchange for Change. Seeing the staggering numbers of incarcerated people – one of every 35 adults is in prison, jail, on probation or parole, and Florida has the third highest population in prison in the U.S. – was all the motivation she needed.

“I believe the statistics are that nearly 85 percent of prisoners in Florida are eventually released back into society, back into the community,” explained Klarreich, “and statistics also show that you reduce your chance of returning to prison by 43 percent, and improve your chance of getting a job, when you get an education.”

She became a non-profit to expand the program and, before the stoppage in March 2020 due to the Coronavirus pandemic, they had been in talks with nearly a dozen institutions. Those talks and visits resulted in the four they now work with. They include two state, one federal and one juvenile residential center, the Miami Youth Academy. In all, there are 33 classes that have reached 1,500 students – through their signature classes where they pair an inmate with students in an academic institution.

“We partner with the University of Miami, Florida International University, Miami Dade College, Ransom Everglades, Gulliver Preparatory and Florida Atlantic University,” she said. “The college students know when they’re enrolling in the class that they’ll be paired with an incarcerated individual. This means, the incarcerated students are reading the same material as the students and basically exchanging views and opinions.”

Surprisingly, the fresh young college students more often than not believe they’re going to teach their imprisoned partners but what happens is the opposite. “It opens up their minds to see things through a different lens,” she said.

When the program was stalled in March, they pivoted and began putting together learning packets that were hand delivered to the incarcerated students enrolled in the program.

“Since then, they’ve been doing correspondence courses and we also put out a national call for submissions for a COVID collection of writings, giving them the opportunity to speak to their experience during this time,” said Klarreich. “They can submit written works or artwork. We hope to have it completed in the fall. We want to document the differences by state and who better to speak about that than them.” 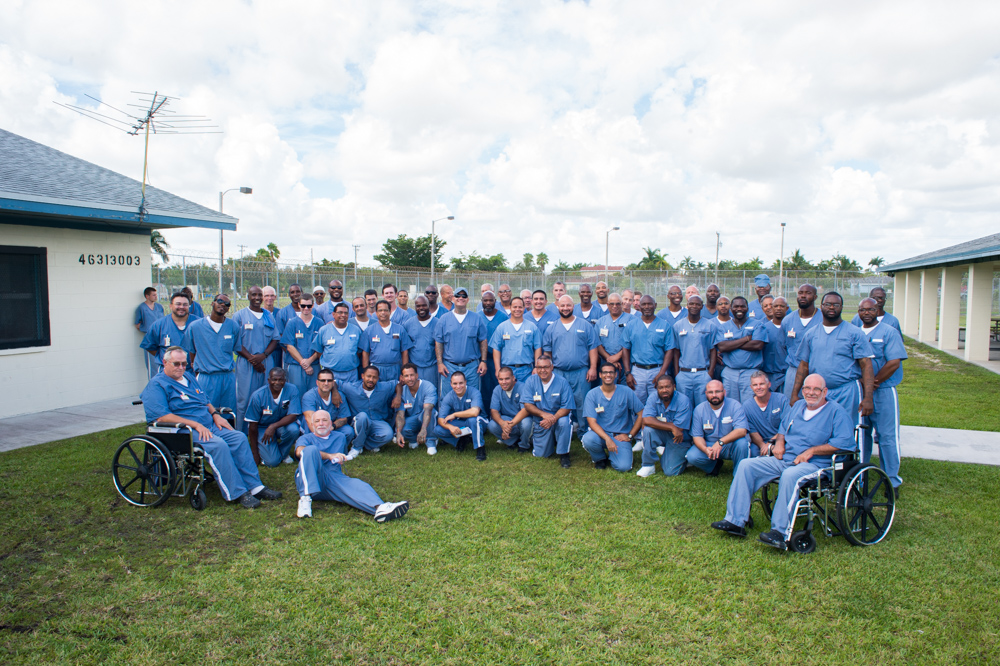 Exchange for Change (E4C) students pause for a photo. Photo by Starr Sariego

“The prison where I am, Everglades Correctional Institution, touts the largest number of volunteers in the state. This amounts to many programs: rehabilitative, self-betterment, chapel, writing, chess and gavel clubs. I had a sense of purpose due to everything I had been involved in.

Then, in early March, everything came to an absolute standstill.

There are few options left to us as we pseudo-quarantine in our unairconditioned dormitories and cells. We can sleep. We can watch television and argue about which news channel is better. Play video games on our secure tablets. Escape to a fictional landscape. Or, vent our frustrations and anxieties using the written word.

So, I write, it is the only thing that keeps me sane. I compose sonnets to the virus and free verse to my mask. Whether to friend, family, or for my own satisfaction, I just write. And as the words flow onto the page with the raw emotion of heartbroken frailty, I become anchored to the hope of a return to normalcy, a return to purpose.”

Imagine the pain then when yet another initiative fell through. It was “Chew on It,” a planned project with O, Miami the organization that puts on the Poetry Festival every April. It would’ve featured two-line poems printed and inserted in the little plastic balls inside the commercial gumball machines, a quirky and creative event that fit perfectly with O, Miami who are known for printing poems on traffic tickets and on stickers for bananas.

A quick pivot once again and “Chew on It” became “Lines from the Inside,” a social media campaign featuring two-line poems by the E4C students.

Here are some samples of two-line poems set to be featured:

Raindrops dancing on a tin roof,

I wonder what they did with English

I haven’t heard it in some time.

So tired of the same old thing

But I’m more scared of the change

In addition to all of this, when the Coronavirus pandemic first hit, Klarreich and her E4C team quickly started a GoFundMe with two other educational programs, raising $10,000 with which they bought and delivered soap for those incarcerated and hand sanitizer for the staff.

You can also read a collection of writings by prisoners in the E4C program in the book “Don’t Shake the Spoon: A Journal of Prison Writing.” Excerpts from the book were presented at The Porch at the Miami International Book Fair. The book includes essays, poems and stories.