Program is presented in collaboration with Artburst Miami

The final two programs of FAN Fare: Made in Miami, a comprehensive lecture series presented by the Funding Arts Network Advisory Council, are happening Monday, Feb. 20 and 26.

The series kicked off with an evening with Florida International University Professor, poet, and Pulitzer Prize nominee Campbell McGrath, who read from several of his books throughout the presentation. He discussed the various poems he read, all of which depicted some aspect of his life in Florida, all the while sharing his inspiration for each one. He also took questions from audience members and engaged in conversation with Mia Leonin, Artburst writer, poet, and University of Miami professor. 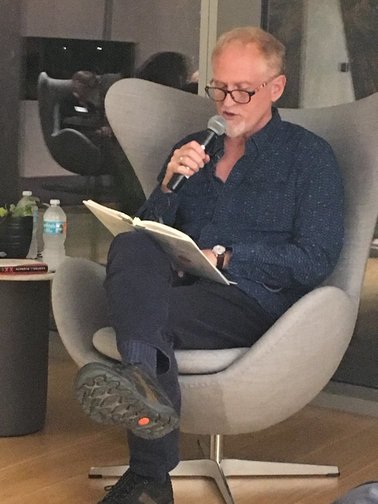 Campbell McGrath reads from one of his books during opening night of the FanFare series.

Dance and music are set to be the focus of the final two programs. On Feb. 20, Artburst writer and Barry University Professor Celeste Landeros leads a discussion with Michael Rossi, conductor of the Miami Music Festival. Rossi will be joined by several alumni performers for a special intimate performance.

The final evening is Feb. 26 and features Dimensions Dance Theatre of Miami founders Jennifer Kronenberg and Carlos Guerra in a conversation led by Artburst writer and Barry University Professor Sean Erwin. Kronenberg and Guerra will talk about their time as principal dancers for Miami City Ballet and their journey to forming their own dance company.

Programs are from 7-9 p.m. at The Grove at Grand Bay Condominiums Library, 2675 S. Bayshore Dr.