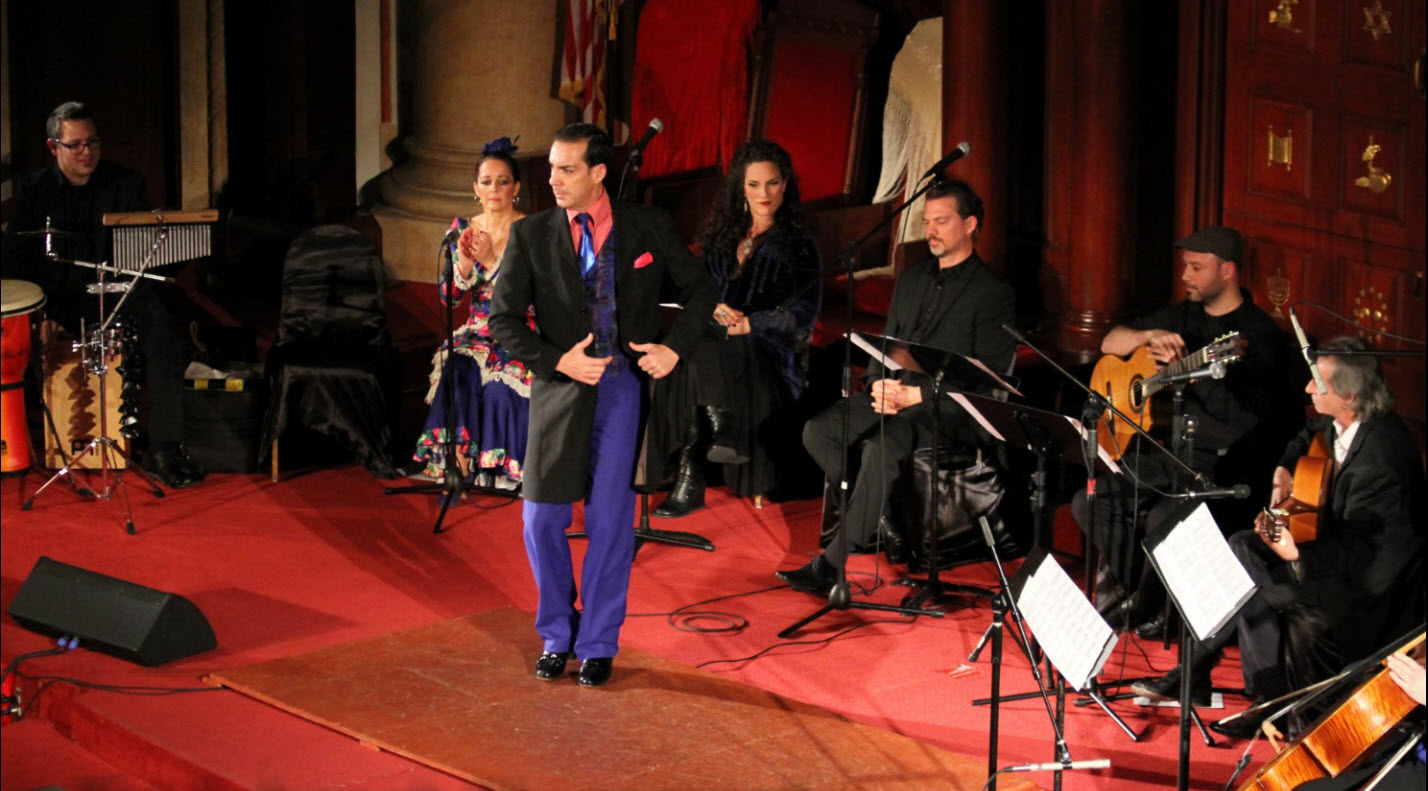 Melding pure flamenco with the Jewish Ladino traditions of Spain, Flamenco Sephardit will bring their show Jan. 27 to Temple Emanu-El in Miami Beach for the sixth consecutive year, and executive director Jeffrey Eckstein is excited to return. The company has some surprises in store for 2019.

This year, for a new show titled “Passion and Grace,” they’re bringing in Jeff Basile Pekarek, a bass player and composer, and his daughter Lakshmi “La Chimi” Basile, a flamenco dancer. Eckstein met Basile Pekarek while attending graduate school in San Diego and chose him to assist in writing the arrangements for violin and cello.

“I am so excited to have them join our already phenomenal cast. As such, this will be the very first time that we have acoustic bass in the show, along with the violin and cello, which creates a huge change to our sound,” Eckstein says.

It is also the first time they’ll bring in a dancer from outside Miami as well as have two female dancers instead of one male and one female. Eckstein feels this will change the dynamic of the show, and he’s looking forward to seeing the result.

Pekarek and Basile are a powerhouse team. Both have been a part of the flamenco community for years, he as a composer with a keen sense for what works with the dance form and she as a resident of Seville, Spain, for the past 15 years.

For the upcoming performance, Eckstein is once again partnering with dancer Celia Fonta and guitarist Paco Fonta of Siempre Flamenco, whose 2018 appearance with Flamenco Sephardit attracted 1,200 people.

The new show, “Passion and Grace,” includes pieces from previous productions but also some additions, such as the appearance of an opera singer during the opening dance.

“A great example from last year was incorporating the violin and cello into even more of the flamenco dancing,” Eckstein says. “That is one of the most difficult things to incorporate, because sometimes the dance is flexible with meter, pauses, etc., but we also need to have consistency in any parts that are written out.”

Last year, Eckstein and his collaborators wrote a piece for strings during one of the big flamenco dance solos, “and it was a huge hit,” Eckstein says. “So we are going to bring that back this year, possibly altered a bit. We always want to keep a fresh twist on it.”

This year’s production includes the most new cast members ever, including Jeff and Lakshmi Basile, Cuban-American soprano Nathalie Avila, Chava Appiah on cello and Katherine Kobylarz on violin. They are joining Celia Fonta, Paco Fonta, Michel Gonzalez and Rabbi Marc Philippe, all of whom have been regular cast members since the group’s inception.

From the beginning, Eckstein’s goal has been to have great musicians who embrace the concept of a collaborative team and for each member to bring their own talent and artistic interpretation to the group. For that reason, Eckstein has the musicians stay onstage for the show’s entirety to support their colleagues.

“I am honored to have had so many incredible people in the cast these years, each of whom has helped make the show and our team what it is today,” Eckstein says. “To paraphrase Walt Disney: ‘Whatever we accomplish, belongs to our entire group, a tribute to our combined effort.’ ”

As for the group’s performing at Temple Emanu-El, that evolved from a very special relationship that blossomed when Eckstein met Rabbi Marc Philippe, the temple’s rabbi and cantor.

“I was so inspired by him, and his gracious offer to do the premiere performance there. I knew the incredible Byzantine architecture would be the perfect ambiance for the show,” Eckstein says.