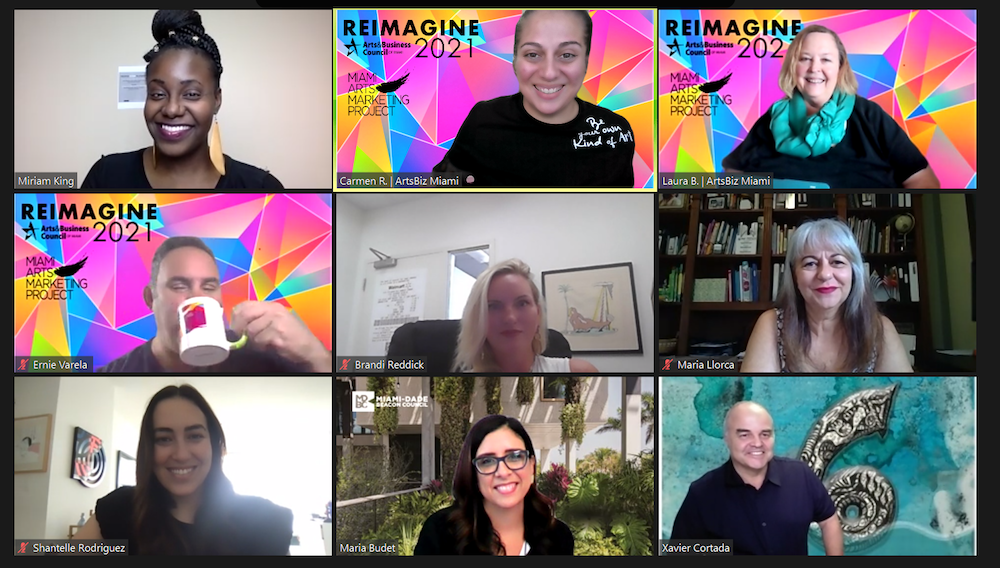 Chad Bernstein, founder of Guitars Over Guns a non-profit serving underserved youth and a working musician best known for playing trombone for Miami’s own Suenalo shared his own personal story.

“Music is what got me through school and became my vocation and took me around the world touring. In Miami is where I truly came to understand how music can transform lives, which I realized when visiting a correctional facility to perform with Suenalo,” Bernstein said. “With Guitars Over Guns, our mission is that music and musicians can empower these kids to reach their full potential. We started in 2008 with 15 students at North Miami Middle and now serve about 1,000 students a year in Miami and other cities.”

Brandi Reddick, Cultural Affairs manager for the City of Miami Beach discussed how they have created programming to support artists during the pandemic. Through their Open House program, where they converted empty storefronts into working spaces for artists. They included spaces on Collins Avenue and on Lincoln Road.

“Each artist received $2,500 for their project. We also launched the No Vacancy Program to help support hotels by commissioning 10 artists for to create public art installations at hotels. We will be launching this program again this year,” she said.

Additional Miami Beach include $2 million to support the 15 anchor art sites/organizations around the beach and another $1 million to commission cultural activations in the next year.

Representing local artist Xavier Cortada at the MAMP Lab was his Studio and Lab Manager Adam Roberti saying that Xavier’s social practice is at the cutting edge which “allows him to create eco awareness and transform people into eco adversaries. His work has a sense of urgency.”

Cortada’s entire artistic career has been about elevating the voices of people in marginalized communities which he most recently showed through the Thrive 305 Campaign. It asked the simple question “What does a thriving Miami community look like for you?” and ultimately the public’s answers to that question culminate into an art project unveiled by Miami-Dade County Mayor Daniella Levine Cava at Miami City Hall.

Sharing a similar goal of elevating voices, Miriam King Founder of EVE (Empowerment via Education) Consulting Firm, does so by creating safe spaces as an educator, artist, and certified diversity coach.

“I help navigate the difficulty of conversations around socio-normative practices that are not often recognized. It’s ultimately about elevating the voices, experiences and ideals of persons involved in an organizational workspace,” said King. “Our intellectual aptitude is only elevated by social and emotional engagement.”

Feeling a need to understand and hear the voices and experiences of young adults, she created the Courageous Creatives Leadership Collective, particularly because young adults as emerging artists and entrepreneurs were not being heard in ways that mattered.

She partnered with Cultural Affairs and created a virtual space to work around three premises — unlearning, learning, and building to help learn how to react to all the changes happening in the world around us, especially in 2020.

“As part of the Collective, 23 creatives studying multidisciplinary practices created the initial project “Take Back Time” and my hope for building this project is for Miami to serve as the model program and to do this on a national scale,” said King. “We are working to bridge the gap between college to early career [as] there is not enough professional development for that phase between college and early career.”

At Americans for the Arts, Clay Lord’s work as vice president of Strategic Impact centers on changing and transforming public value,  including the social impact of the arts and how arts and culture are an important part of people’s daily lives. The Explorer Program showcases this initiative.

“We do this in part because in the US many people do not see the value of arts and culture. They think of it as a nicety and not a necessity,” said Lord.

Since the beginning of the pandemic 18 months ago, Lord has become the expert on creative workers and the impact of COVID-19 has had on them through the Get Creative Workers Working.

At Superblue, Shantelle Rodriguez’s role as director of Experiental Art Centers talked about working with a large, broader experience of art. It is unique in that the event splashed all over the press with a marketing team working on audience engagement and programming. Another important feature: Superblue shares profits with the artists exhibited, filling large flexible spaces (the first one had an audience of 50,000).

“The first EAC was in Allapattah called ‘Every Wall is a Door’ and eventually these will travel around the world,” said Rodriguez. “We call our audiences ‘experience seekers.’”

When it came to taking creative risks and thinking outside of the box, Reddick used the production ‘Seven Deadly Sins’ by Miami New Drama on Lincoln Road the Bass Museum’s addition of 10 public artworks to their collection as prime examples. “Taking risks is fun and exciting,” she said. “People are willing to invest in you when you take risks.”

Echoing King’s need to create creative spaces, Bernstein from GoGo recalled how growing up, access to the arts was his refuge and got him excited about going to school. As artists, “we know that if we create spaces where students can realize their potential, we are creating a space for them to succeed and build relationships and value themselves,” explains Bernstein. Ultimately, he said “we also realize we need to pay it forward, lean into it and pay the artists for their work.”

Lord touched on both those points saying that COVID exposed the mistreatment of the creative workforce where in 75 per cent of cases where a creative’s work was used online by a cultural organization, they were not compensated.

“We also need to invest in innovation but set aside enough funds to pay the labor that is involved in that artistic product. We’re at a moment that cultural workers cannot sustain their lives if they aren’t compensated,” said King.

King believes these spaces work to create collaboration and allow young adults to think innovatively on their way to becoming thought leaders. They serve the greater good of social and cultural development.

“We need to look beyond our marketing strategies and figure out what is going to connect with our audience and advocate for the beliefs and values we hold true to ourselves,” King said.

That is something Xavier Cortada is shouting from the rooftops, that art can make a difference and effect social change. “Moving forward, we need to lay the foundation and build an infrastructure. This is where socially engaged art has a role to play,” said Roberti.

Like many black women, Miriam King never saw enough voices that reflected and validated her love of theater. “It was my vehicle to express the ideas and interests that were important to me, which is why I continue to emphasize a multi-generational approach to move the conversation and the work forward,” she said.

On the national side, Clay Lord talked about the $350 billion being disbursed with barely any strings attached to both local and state governments. The only stipulation is that it must be used for the recovery of the community post-pandemic. The National Endowment for the Arts has a similar $135 million Also mentioned the NEA’s $135M from their Rescue Plan available to all types of organizations including social engagement work that is being done to create justice.

Making art accessible to all is something Superblue and Guitars Over Guns share with Rodriguez, saying they work to hire staff that reflects their diverse audience. “Our staff are architects, stage designers, and app developers.”

At GoGo, Bernstein loves how the digital world bridges the gap between academia and working artists. “Having been a doctoral student and also getting to meet artists who didn’t have the same path as mine has taught me so much,” he said.

Making the art world more inclusive and less elitist can be accomplished by “changing our mindset like with Superblue and having a younger audience in attendance,” said Rodriguez.

With Reddick she asks the opinion of her young nieces and nephews and grandmother for their opinions. “It allows me to get an immediate reaction from people without any art training and that is what you want to know,” she said.