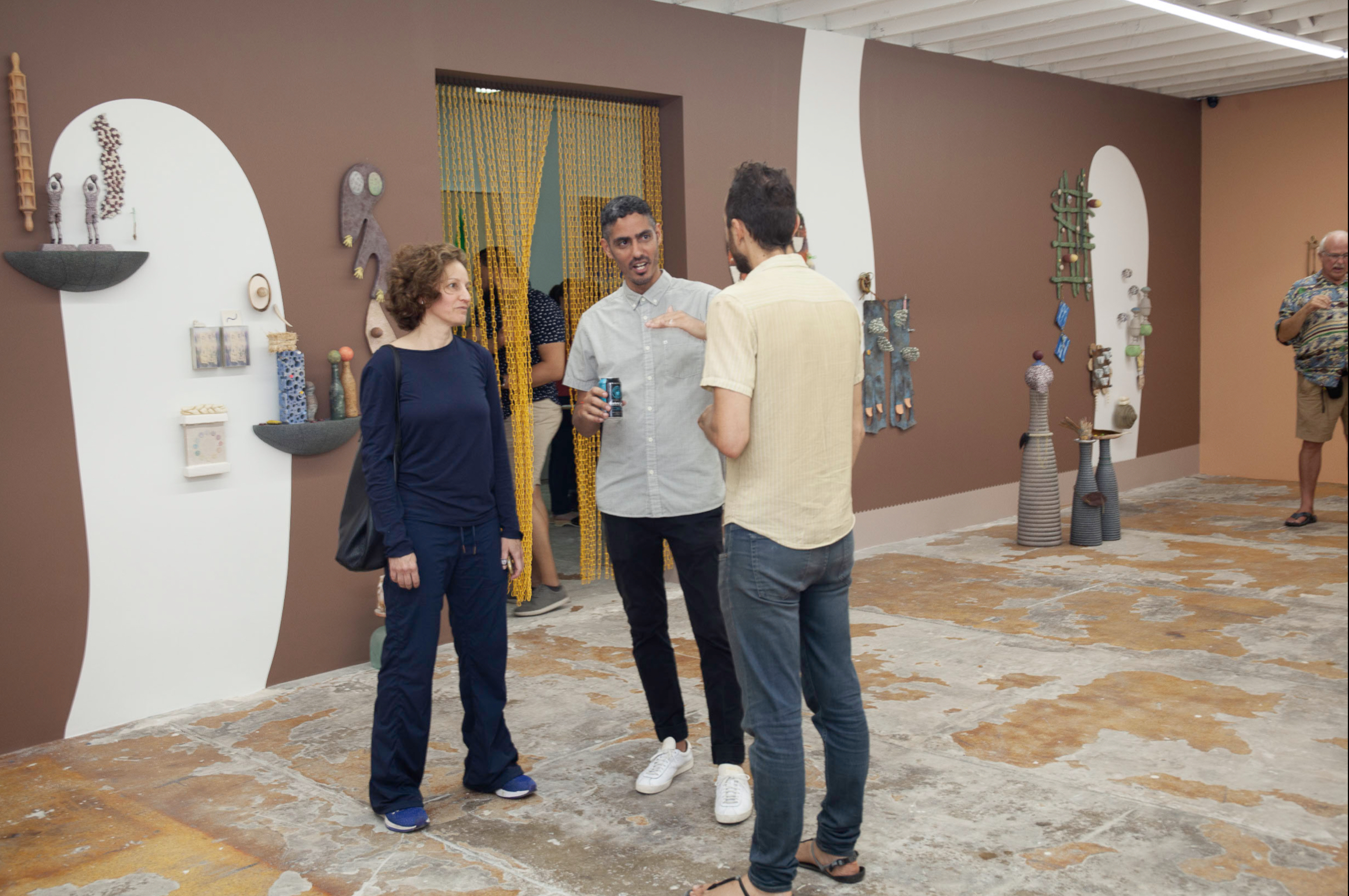 The enthusiastic and curious well-wishers who flooded Dimensions Variable’s May 11 opening reception at its new location gave founders Leyden Rodriguez-Casanova and Frances Trombly a sense of continuity with the dozens of openings they’ve hosted since launching their arts incubator in 2009.

However, the new location, at 101 NW 79th St., in Miami, is only one of the changes marking the rebirth of this not-for-profit enterprise. Dimensions Variable has expanded its studio component to include new resident “collaborators” — artists Magnus Sigurdarson, Laura Marsh, Juan Pablo Garza and archivist Anita Sharma, who is showing models and documentation from Karen Rifas and Cara Despain. The facility welcomed visitors to view three inaugural exhibitions/installations as well as the studios.

Dimensions Variable’s reopening redeems the abrupt termination in January 2018 of a brief partnership with Miami Dade College. Rodriguez-Casanova cites an incompatibility of vision and administrative style between a large bureaucratic institution and their small, scrappy, quick-changing one.

Consultations with the Knight Foundation gave them hope. “Knight thought it was important for us to rebuild and offered assistance,” Rodriguez-Casanova says. A successful grant-writing campaign secured funding to regroup with the entrepreneurial directive the foundation promotes. 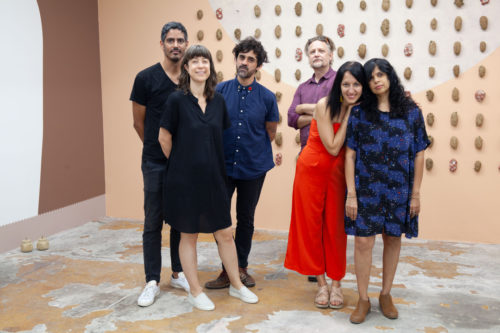 Without donated space, they would pay rent but gain freedom from unpredictable patrons. After evaluating numerous sites, they signed a three-year lease on the 4,500-square-foot former transmission shop. “Our budget mission is to raise the money to become self-sustainable beyond that [three-year seed funding] and renegotiate with the landlord,” Rodriguez-Casanova says.

Almost 10 years ago, Rodriguez-Casanova and Trombly asked themselves, “Do we need to get an extra job to secure the money — in addition to our home mortgage — to pay for a studio? Or do we put the same amount of hard work and energy into creating a project that supports the community and supports our peers and ourselves and creates an ecosystem?”

“So that became a no-brainer for us,” Rodriguez-Casanova says.

Meanwhile, Rodriguez-Casanova and Trombly exhibited independently. Part of Knight’s enthusiasm for this new iteration is the concept of a startup-funding plan whose financial goals are sustainability and replicability of the model. Unlike a co-op, their concept is not that everyone shares the rent, Rodriguez-Casanova says, but rather that everyone “contributes to a brain collective.” Artists will help to raise funds through creative strategies, starting with old-fashioned grant writing and commissions on sales.

This structure of shared responsibilities aligns with the open-studio layout and a commitment to flexibility and experimentation among the collaborating partners. It also aligns with Rodriguez-Casanova’s and Trombly’s individual practices. Both fabricate art objects: he using repurposed and astutely juxtaposed construction artifacts; she principally working with fibers and fabrics. And both sometimes install their work in ways that disrupt “normal” presentation conventions regarding audience navigation and access. Simultaneously, they use the art platform to raise questions about class, domesticity, the economics of work, authentic and faux materials, craftsmanship and mass production. 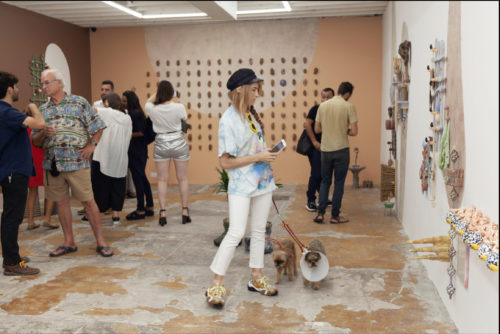 “Anti-wall” and “non-compartmentalized” are terms Rodriguez-Casanova uses, while acknowledging that striking a balance between privacy and openness will be an evolving process in their new digs. Two days after the opening, Garza was speculating about mounting a door or curtain. “Decisions will have to involve everyone,” Rodriguez-Casanova says. “It will be a more complicated democracy than we’ve been used to for a while, but I think that’s a good thing.”

The selection of new studio partners developed over several years. It couldn’t just be about securing work space, but sharing a collaborative vision. Nor was Dimensions Variable ever about rotating exhibition opportunities among the partners, like a co-op.

Paradoxically, the central gallery’s inaugural exhibition, “Arenas y Arenas y Arenas,” featuring Juan Pablo Garza, had actually been planned years prior to the artist becoming a “collaborator.” While moving into his new studio, Garza took on the gallery as an improvisational installation, painting eight large, biomorphic shapes on the walls, then painstakingly installing innumerable sculptural objects from his vast collection to create a coherent ensemble. Early on, he pinned a grid of about 150 potatoes to one wall as an “offering.” They sprouted along with the exhibition. Other walls carry frames, mirrors, shelves, shells, hands, faces, vessels, brackets, chains and bones. They’re large and small, hand-molded, found, altered, cast, bound and clustered. “It’s about accumulation and organization of material and objects as information,” he says. Overall, it is a personal visual encyclopedia that’s enveloping and welcoming.

Garza’s other charge was to choose an artist for the second exhibition space. He selected Luz Carabaño, a young Venezuela-born painter whose show is titled “Ni Aqui, Ni Alla.” She has selected objects for scrutiny that evoke both familiarity and mystery. Her modestly scaled canvases offer meticulous representations that vary from pointedly crisp to — particularly in “The Boy’s House” — appearing to melt into diaphanous space. Her “Diablos de Yare” references a popular Venezuelan festival in which masked “devils” perform provocative devotional dances. Her depiction renders them pirouetting in an ambiguous space — simultaneously present and imagined.

“Untitled: Social Commentary,” Gustavo Matamoros’ site-specific sound commission, arose quickly. “When we saw this space, that corridor, I thought it would be really the kind of transient space for him to do an intervention,” Rodriguez-Casanova says.

Rather than generating sounds or using field recordings, Matamoros downloaded and overlaid multiple versions of three historical compositions by Johann Sebastian Bach, Arcangelo Corelli and Carlo Gesualdo. Differences of tempo, volume, instrumentation and key in each performance were revealed by selective crossfading, causing subtle discrepancies among the “stacked” renderings of what was the same music — in name — but performed differently.

He then presented the eight channels through a row of overhead speakers, achieving what he calls a “cubist” experience of the music, with audiences apprehending it from several perspectives as they navigate the corridor while individual speakers sequentially emphasize selective segments. This challenging audio experience can only be experienced in the site it was created for.

Exhibitions will be on view through Aug. 1 and can be seen by appointment at Dimensions Variable, 101 NW 79th St., in Miami. Contact dv@dimensionsvariable.net.