The online format has been a lifesaver for so many businesses and that includes the arts community.

City Theatre, like so many other arts groups, has taken full advantage of Zoom by presenting their City Reads National Award Virtual Reading Series in that format. Each weekly Thursday episode features four new finalist plays directed by Margaret Ledford, City Theatre’s artistic director, and interviews with the playwrights who hail from South Florida and throughout the United States.

The series, which streams on their Facebook page and YouTube channel, gives City Theatre the opportunity to continue bringing visibility to the lively and diverse genre of the dynamic short play, for which they are so well known, and the talented cohort of playwrights selected from 750+ play submissions, to online theatre-loving audiences everywhere.

“We get to sort of have our cake and eat it to. We recognize the playwrights and put out to the universe the kind of breadth of writing they are producing,” said Ledford.

Susi Westfall, City Theatre’s interim executive director said, “As we’ve been doing these national awards contests, we’re learning a lot from the playwrights we’re Zooming with. Also, our decision to create a contest from this series is something no one else is doing.” 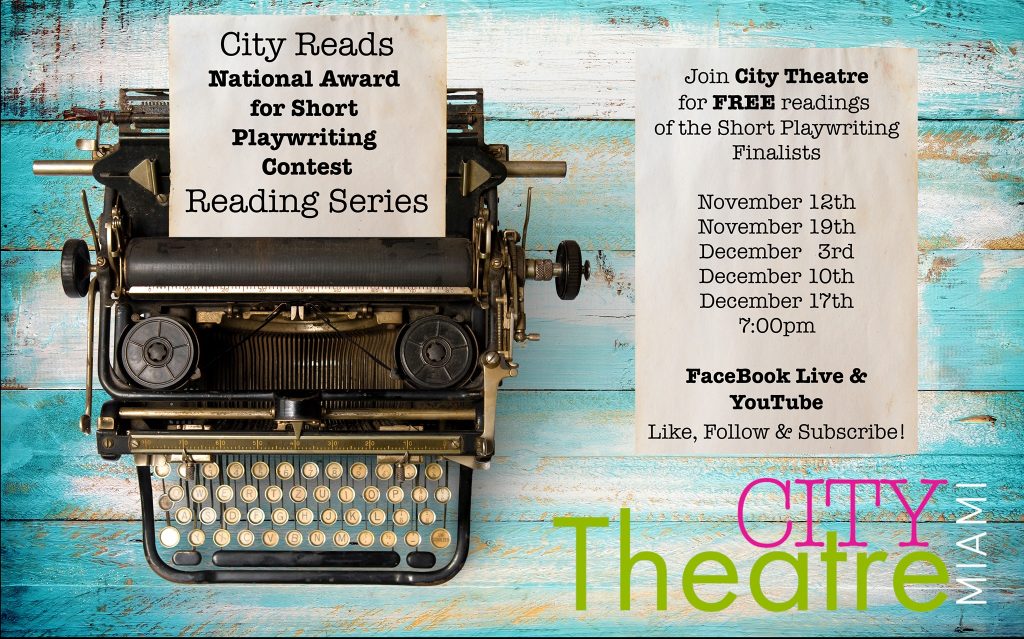 The winner gets $1,000, as well as royalties and getting their play produced; the finalists’ plays become the benchmark and what City Theatre looks to for all their programming.

“The program was established in 2012. This, as well as our City Wrights program, has introduced us to the playwrights and them to us,” said Westfall.

Of the 25 playwrights that are part of the virtual readings, some are brand new while other have been produced before by City Theatre.

Margaret said, “One young lady who came to us originally for our City Wrights Scholars for high school writers, then interned with us, is now finishing up college. She actually ended up in a dorm room with another one of the finalists, an absolute coincidence.”

Essentially, the virtual conversations when they pull them together, serve as a peek inside their Shorts program. The interesting mix of new playwrights, those familiar with City Theatre’s work and those getting their first professional nod is ideal. “It’s really validating for them working with each other,” said Ledford. “This is very innovative for us as well.”

Not wanting the current in-person limitations to stop them, Ledford thought they should continue showcasing these plays which recognize excellence in short playwriting.

They see each other because the interviews are done in pods with four plays presented per week. Where it gets interesting is with Margaret’s final question each week when she asks, “When we are able to gather again physically to experience theater, what do you imagine or what do you want that to look like.”

The answers she says vary from “wanting to see more honest plays” to “no plays about COVID.”

And COVID and no in-person theater has allowed them the opportunity to reflect on changes they need to make in the future.

“We’ve had time to reflect on our own bias and ask ourselves ‘how do we make this feel more equitable,’” said Ledford. To which Susi added, “we’ve learned we have to make better and more active choices and ensure we’re not unknowingly closing doors to BIPOC folks.”

In essence Westfall and Ledford echoed, “Maybe we’ve all been waiting for this zeitgeist and we don’t think we’ve heard anyone lamenting any of these challenges.”

The Zoom experience also changed their dynamic because “a door that closed basically opened up a lot more windows,” said Ledford. “I realized that I have to tack on an hour to whatever we’re doing for that particular reading because the actors are craving that sense of community and togetherness.”

And because the ultimate goal of City Theatre is to meet the creativity expectations of these playwrights, “something we’ve been building on over 25 years, it’s nice to know that we’re meeting those artistic ambitions,” said Westfall.

Also, the portability of their 10-minute play format has proved to be an asset to City Theatre because it hangs together as opposed to doing an excerpt of a longer work.

The virtual play reading series has also “allowed us the opportunity to sit in with the playwrights no matter where they are,” said Westfall. “We see the conversation develop from the first question of how they begin the 10-minute play into something else entirely.”

Many of the playwrights in the series are creating works for other theaters through Zoom. Overall, “this programming has provided commission opportunities as well of course,” said Westfall.

Ultimately, the series has proved one thing – “artists and creatives have an inherent need to create, it’s essential to our being.”

Learn more about the virtual play reading series, running through Dec. 17 on the City Theatre website.