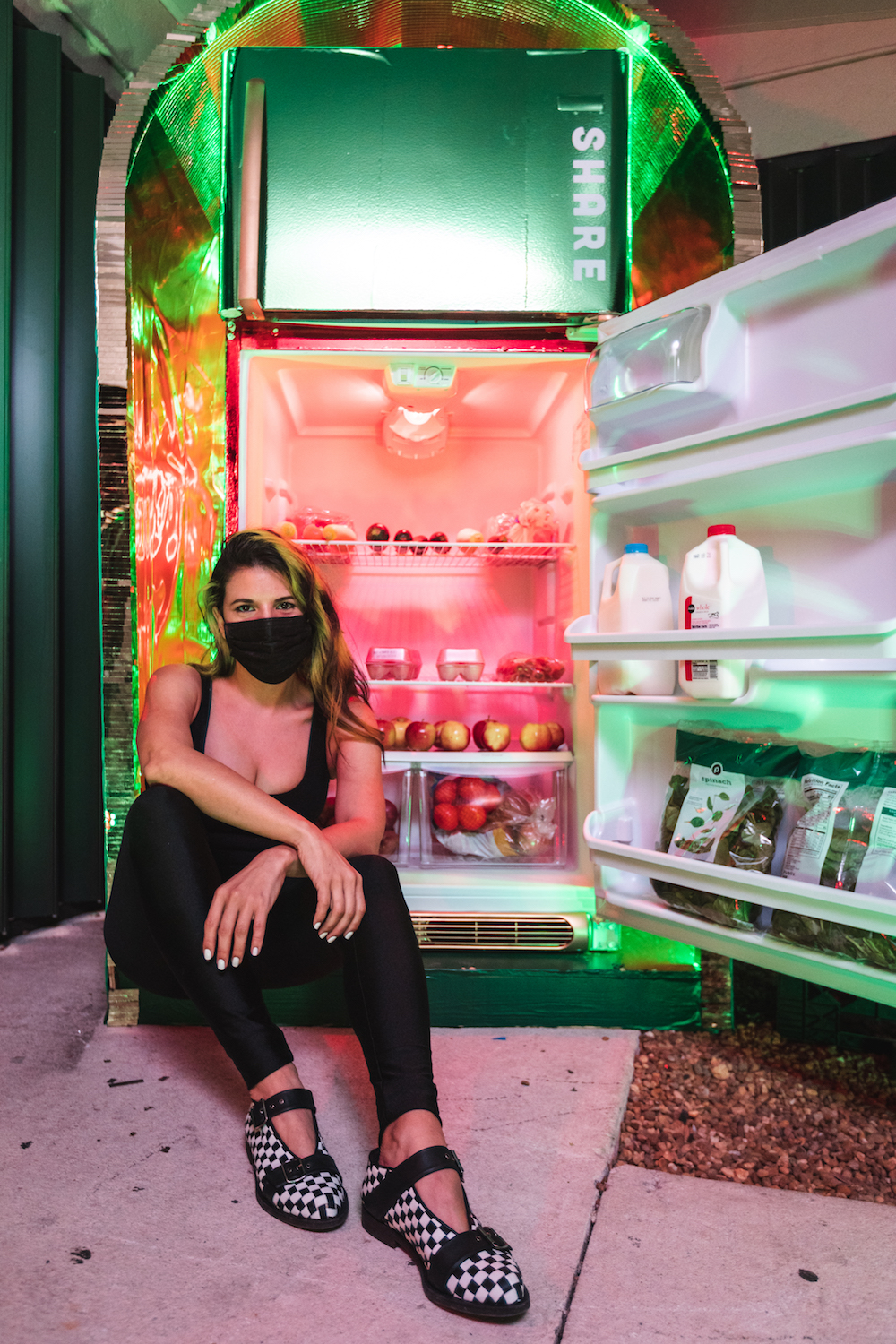 Miami Artist Haiiileen in front of her design. Photo by Juan Felipe Rangel

The beauty of collaborations, especially in the case of the non-profit Buddy System MIA and their Miami’s Community Fridges project, is that everyone wins and the most basic of needs, nutrition and feeding people, are met.

With the help of Buchanan’s Blended Scotch Whisky, who commissioned a team of Miami-based artists to add their artistic flair to the exterior of the fridges, those in the community that rely on that free food now have an even easier time finding them.

“It’s inspiring to see how successful these community fridges have been in bringing us all together as neighbors to share meals with those who need it most,” said Kristin Guerin, CEO of Buddy System MIA. “Since our Community Fridge Initiative with Buchanan’s launched in October of last year, we have made incredible strides toward improving food access in Miami’s food deserts and have provided more than 28,000 meals to local communities.”

Continuing the initiative in March 2020, Buchanan’s partnered with Alex Yanes, Atomik and Haiiileen to design three new fridges established in Miami as well.

Two of the colorful fridges are located in Hialeah, two in Wynwood, one in Coconut Grove and one in Florida City.

In the latest round of decorated fridges, the artists drew inspiration from their own local neighborhoods when creating their artwork. In Hialeah, Yanes created a multi-colored geometric-like pattern in red and various shades of yellow and green and Haiiileen enveloped hers in a metallic green, incorporating neon lights in the background. Atomik emblazoned his refrigerator in Wynwood with his signature orange against an all-black background. Atomik’s smiling, cartoon-like orange, inspired by the demolished Orange Bowl Stadium, is recognizable throughout various murals in Miami.

All three of them automatically said yes when approached by Buchanan’s and have received nothing but great feedback from the community. 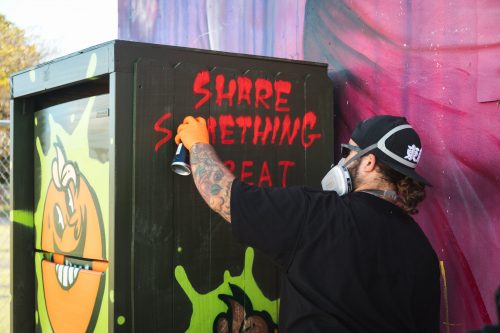 Atomik, adding the finishing touches to his design. Photo by Juan Felipe Rangel

Atomik said “I worked with Buchanan’s and Buddy System MIA to beautify this refrigerator for the community. My character comes from a football stadium that was demolished. The orange, it lets off a good energy, a nice smile, the eyes lock into you.”

Haiiileen felt it was an amazing way to give back to her community through her artwork. A first-generation Cuban-American it gave her great pride to create an installation celebration her roots and her hometown.

“Because of COVID, a lot of art exhibitions have been interrupted and it’s inspiring to see an initiative like this built around uplifting the local art community,” she said. It also allowed her to continue experimenting with unconventional materials on a unique medium like a community fridge, “bringing light and color to families experiencing food scarcity.” 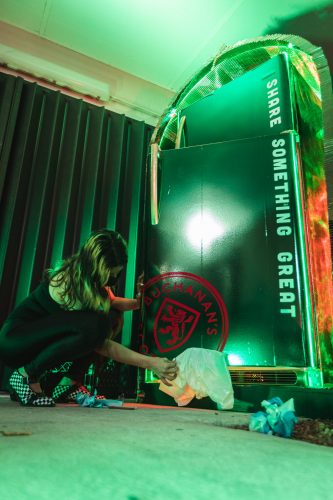 Her design has been described as hypnotic and psychedelic, where she works with light and color theory concepts, playing with spaces and adding light to enhance the effect.

“Through my design, I’m shining a light on a brighter future and using my powers for the greater good of my hometown, Miami,” she said.

Yanes was thrilled to be included with such an amazing group of artists saying, “Miami is a city widely known for its vibrant art scene and being able to see this initiative bring together some of this city’s greatest artists to support their community during a time of hardship has been an incredible experience.”

Echoing Haiiileen’s sentiments, Yanes also loved being able to stretch his artistic mind with a bit of experimentation. 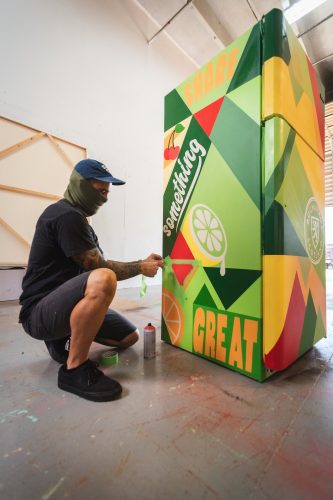 “I love experimenting with ways to translate the city’s energy and rich culture into vivid colors and bold designs. To have the opportunity to create art while also giving back to the community that inspired it to begin with has been very fulfilling, both as an artist and as a Miami native,” said Yanes.

For the fridge, Yanes wanted to create a clean bold design and something that fits in with Miami.  He incorporated the tropical greens and images of citrus fruits that are Florida grown to give it that 305 feel.

Making food accessible to people most in need, and truly anyone who needs it, resonated tremendously with the trio of artists.

It’s the most basic of needs said Atomik “people have got to eat to survive and by filling up these fridges, it’s giving people another day to live.”

Haiiileen loves that the project is something sustainable the community can continually use and “will continue making an impact and inspiring Miamians for years to come,” she said.

Seeing the project as the perfect match, Yanes feels it is “exactly the kind of response to food scarcity this city needs, merging creativity with humanity.”

And with community fridges continuing to pop up all over the city, more are set to be artistically enhanced. Through Buchanan’s Whisky’s donations and support, Buddy System MIA has achieved their goal of providing 10 community fridges as of March 2021.

Learn more about these community fridges and their upcoming plans on their Instragram page @miamicommunityfridge.