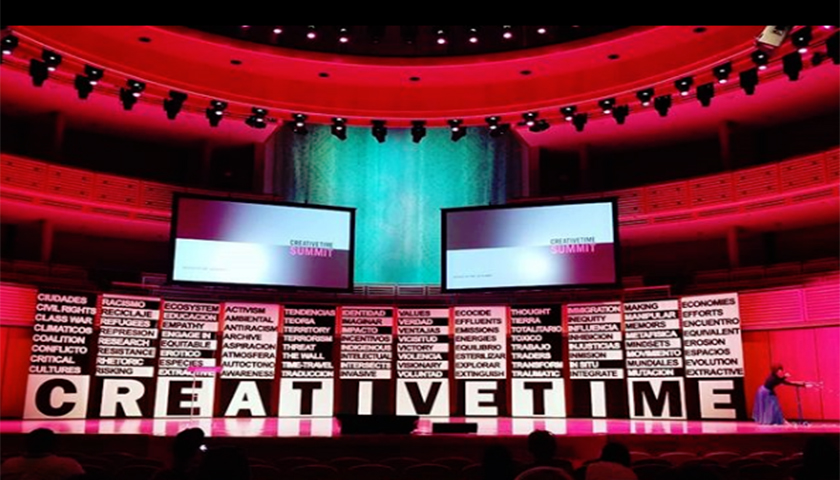 Hosted by Art in Public Places Miami-Dade, the 11th Creative Time Summit, an annual convening for thinkers, dreamers, and doers working at the intersection of art and politics, was held in Miami for the first time in November. For a few days the summit bridged the various siloed communities of our city.

Following an artsy opening reception at the Perez Art Museum on Friday evening, participants convened at the Adrienne Arsht Center on Saturday for a full day of innovation and insight. Artists, arts professionals and community leaders from Miami-Dade’s vibrant and flourishing creative ecosystem were treated to an entire day of cutting-edge creatives from around the globe, presented in a TED Talk fashion. The morning started with a recognition of Native lands by Samuel Tommie, a representative of the Miccosukee Tribe, leading a moment of meditation and reflection, while reminding us that the Everglades needs our stewardship. For me, the auditorium was turned into a sanctuary at that moment and, for the remainder of the day, I was at church; creativity became my religion.

We were honored to have celebrated artist Xavier Cortada, the newly elected Chair of the Miami-Dade Cultural Arts Council, offer the Welcoming Remarks. Cortada was pleased to punctuate the $1.4 billion that the arts contributes to Miami’s economy. Cortada declared that Miami is “defined by our passion for the arts.” As a passionate environmental artist/activist, he took time to point out our unique, tenuous position geographically, as a city that is just 3.26 ft. elevation above sea level; “3.26 ft elevation,” as he held his hand just at his waist to indicate, roughly, what that looks like. The poignancy of these digits was not lost on the audience and would be repeated by presenters throughout in the day. Driving home his meaning, Cortada spoke about our responsibility to make changes to help slow climate change and ended his address with words of warning to be ready, “when Antarctica comes to town.”

Cortada’s words set the tone for what would follow: 8 hours of presentations from radical “artists, thinkers, activists, and cultural producers whose practices stimulate others into emancipatory projects formulated under the desire for planetary thinking.” This from the Curatorial Statement of the conference, set the tone for the conversations, presentations and performances that filled our day with thought-provoking questions, surprising data, conspiracy theories, unexpected insights, and direct calls to action.

I spent the next several hours entranced by the arrival and departure of brilliant, passionate creatives moving across the stage, one after the other. The glow from my cellphone was dimmed to almost darkness as I struggled to capture words and phrases that jutted into my consciousness, sticking to the wrinkles of my mind and lodging themselves there for later reflection. If I were to build a word cloud about this experience (and maybe I will!) it would include segments like “questioning status quo” and “is solidarity possible?,” and “gatekeepers or door-openers.”

Elvis Fuentes, an independent curator who presented, astonished me with “Heritage is not about DNA, but about culture,” and “Surveillance is enough to instill fear,” as images of Trevor Paglen’s “Weeping Angel” cascaded over us and Fuentes warned us, “don’t blink.” There was talk of caravans, and immigrants, and people who “move north in search for love,” as Cuban-born artist Maria Magdalena Campos-Pons put it as she spoke on borderless love.

The keynote by Timothy Morton, Professor of Philosophy and Ecology at Rice University returned to the theme Cortada introduced earlier, speaking on climate realities. I was drawn into a sort of wormhole as he spoke; he was succinct and clear and very specific as he explained that currently 60% of all mammals on record that have gone extinct have done so in the past 100 years. Basically, he explained, we’ve experienced, “40,000 years of extinction compressed into the span of a few 100 years.” Later in the lobby, he was passing out pins that read, “I am the asteroid,” referring to the asteroid that caused the last mass extinction, and highlighting his point that we are the “asteroid” that will cause the next mass extinction.

Many of the presentations were powerful, poignant, and meaningful. Vijay Prashad, Director of The Tricontinental: Institute for Social Research provided insights and observations about the return of the “monsters” of the 1930’s and 40’s, addressing the political and humanitarian state of the world. We also heard from people like Colibri Sanfiorenzo Barnhard, the President of HASER, an organization in Puerto Rico working with grassroots groups to improve the island’s conditions, one neighborhood at a time. She spoke about the importance of “people protesting in the streets and people quietly working within the system to change it, poco a poco.” The day’s presentations went on, from difficult to hopeful, from overwhelming to uplifting, and concluded with a performance by an Afro-Cuban Activist Hip-Hop Group, Krudas Cubensi. The day ended with all of us on our feet dancing to their Afro-Cuban beats and feeling linked and celebrated.

The day of presentations and speakers had an impact on me, leaving me to take a deep dive into my thoughts on my art and my process. Do artists need to somehow address climate change, transnationalism, feminism, poverty, capitalism, ecology, politics, racism, genderism, identity – all of the vitally important topics that were being addressed by these thinkers, activists, artists. The summit was a success in creating conversation and reflection around art-making. I spoke with other attendees throughout the day who were also awed and sometimes overwhelmed by the immensity and immediacy of so many larger-than-life topics. Peering out into the global community and all of the challenges, Miami’s community began looking inward, and across to neighbors, connecting beyond the imaginary boundaries this city creates.

The third and final day of the summit addressed these topics on a more personal level. It took us out to satellite locations throughout our neighborhoods, to places like Locust Projects, The Jewel Box at YoungArts, Exile Books, and Edouard Duval-Carrie’s Studio in Little Haiti. The artist community gathered to discuss topics that are meaningful to us: rising seas, civic ecology, art in public spaces, displacement and belonging, re-granting programs and queer interventions. Through conversations with our peers, all doing incredible work in our communities, we came to understand that each of us is stronger when we work together. We spoke of not relying on the system of galleries and museums to define our work, but to find “co-conspirators” and “accomplices” to strengthen the work that is important to us as artists and as citizens.

The silos of Miami’s artist communities leaned in towards each other a bit on that Saturday of conferences, and bridges were formed. Creative Time brought to us the leaders in artist activism and challenged Miami’s creative community to find methods and strategies to inhabit and change our own world. Upon reflection, I finally understood the title of the conference: On Archipelagos & Other Imaginaries: Collective Strategies to Inhabit the World.