Asser Saint-Val Has Art Under His Skin 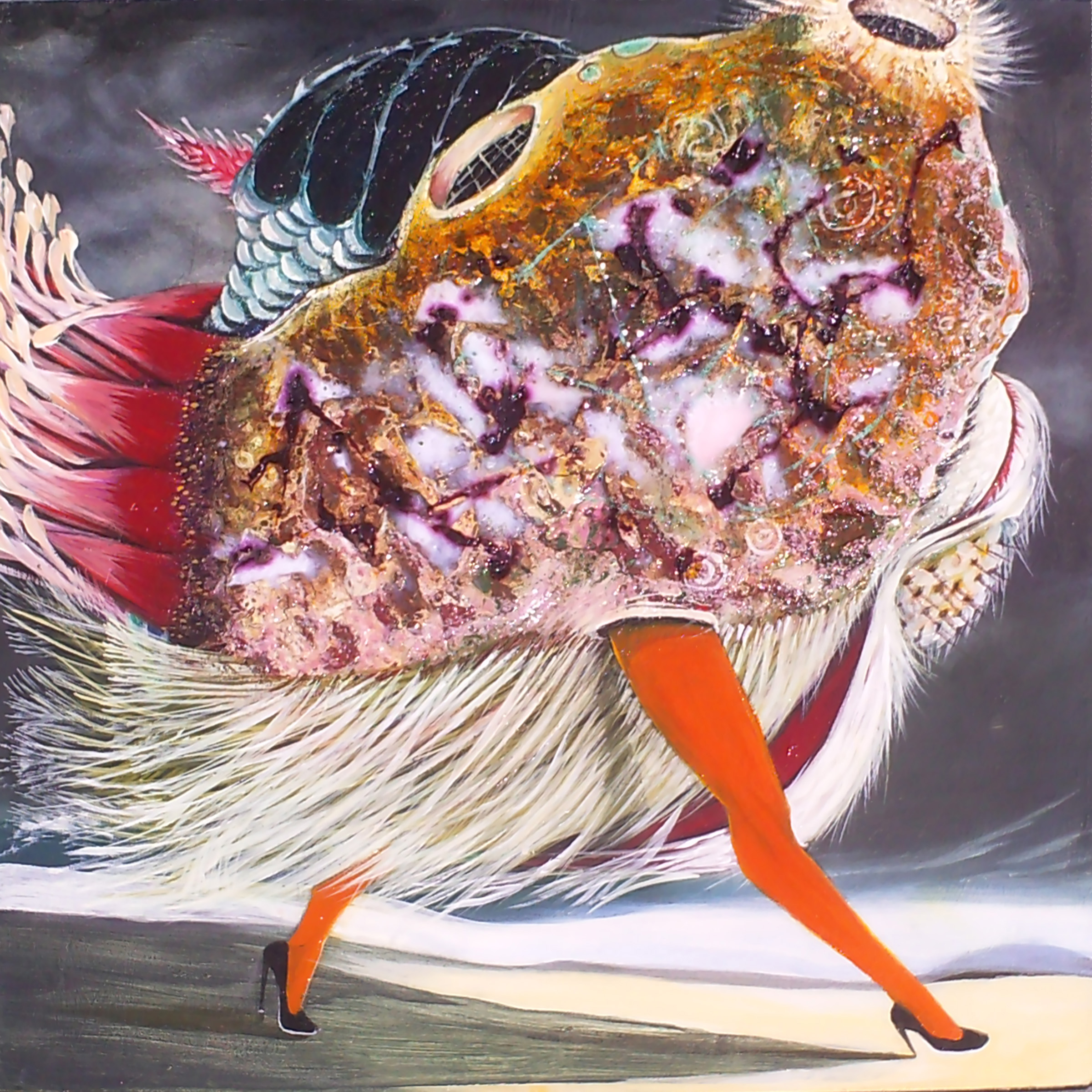 Asser Saint-Val has literally got art under his skin. The Haitian-born, Miami-based artist is known for exploring neuromelanin – a dark pigment in the brain structurally related to melanin – in his paintings, sculptures and installations.

Saint-Val is one of those artists who fully invests himself in his work; he brings his heart, his soul and his skin. In addition to being artistic, his quest is philosophical and spiritual as well. Like so many artists, Saint-Val’s work is also about defining one’s identity.

Originally from Haiti, Saint-Val now exhibits his art throughout the United States and internationally. As a child, he recalls getting in trouble for drawing in class. His habit earned him the wrath of his French teacher, who severely punished him. Then she told the young Saint-Val, “Well, let’s see if you’ll become an artist.” This statement remained in the young man’s head for years and became the driving force that made him the artist he is today. “Perhaps subconsciously I felt I had to prove something to her,” Saint-Val says.

In 1989, he and his family moved to South Florida. Since moving to a new country with a new language and culture, drawing had become his preferred form of expression once again. Because he did not speak English, he was not placed in art classes yet. The primary focus was English comprehension, math, and science.

It was during this period that he discovered a new source of inspiration: magazine photos. “They fascinated me, and I challenged myself to reproduce them as closely as possible using pencils. This led me to draw pop-culture images and superheroes.”

It wasn’t until he attended Hallandale High School, in Hollywood, Florida, that Saint-Val had his first art class. “I was fortunate to have had Miss Linda Payne as my art teacher; she taught me the fundamental elements of art and how to apply them. I absorbed everything and I put them to practice immediately.” 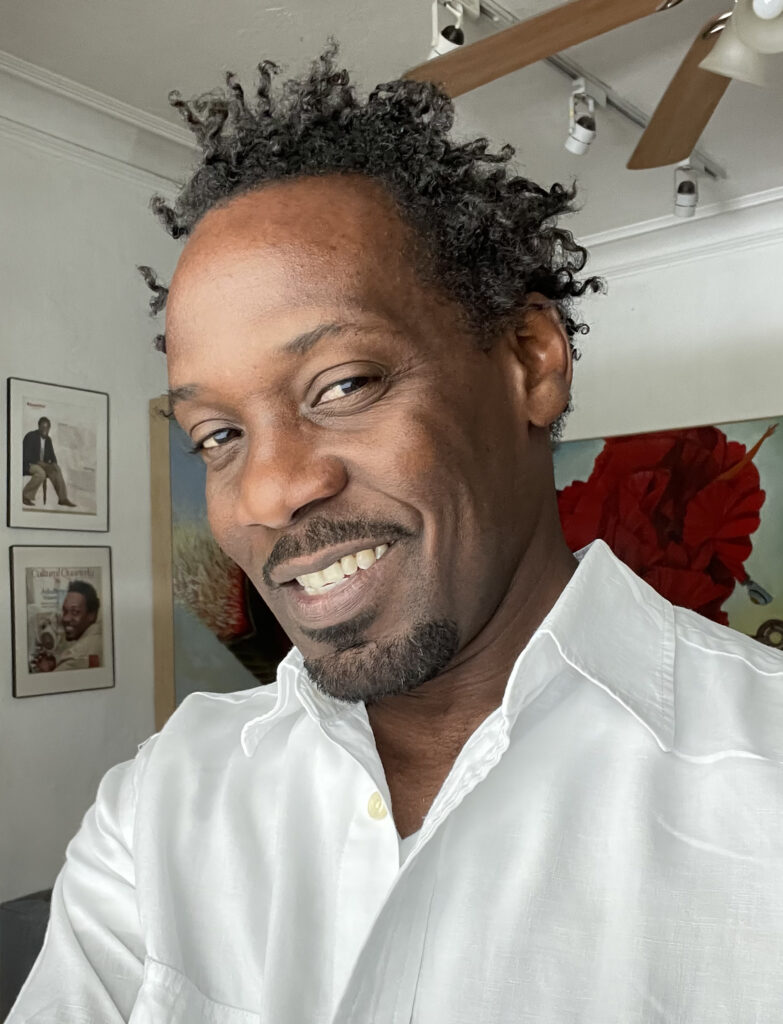 When Saint-Val reached the end of his high school years, he began applying his newly acquired skills for extra income. He drew poster-sized pencil drawings of his classmate’s senior pictures. Even his schoolteachers were commissioning portraits of their own children from the young artist, who was called the “Black Picasso.”

After graduating from high school, he was accepted with a 4-year scholarship to the New World School of the Arts in Downtown Miami. The NWSA/University of Florida would award Saint-Val two degrees: a BFA in painting and a degree in graphic design.

While studying at NWSA, the artist met Rosie Gordon Wallace, the founder of Diaspora Vibe Cultural Arts Incubator (DVCAI), the organization representing his work since its inception in 1997. “She has been a mentor to me, both personally and professionally. I’m honored to have been the first artist she exhibited in Diaspora Vibe Gallery, which is now DVCAI.”

As a Haitian immigrant, Saint-Val confirms that he faced discrimination on many occasions, and says that by moving to the US, the artist discovered his identity as a Black man. His eyes were opened to new ways of seeing it, and he developed new ways to protect it. “It was necessary because if I didn’t go through that, I probably would have never known who I am.”

Influenced by his peers and college professors, and by his reading on metaphysics, Saint-Val explored neuromelanin and its connection with spirituality. The painter and installation artist expresses these ideas through mixed media paintings, sculptures, and multi-sensory interactive art installations. “I’m interested in neuromelanin and spirituality as a means for self-mastery, to manipulate my own subconscious mind,” explains Saint-Val, describing his art as mysterious, bold, lush, inventive, fearless, and colorful, just as his childhood in Haiti was.

Neuromelanin is secreted by the pineal gland, a part of the brain that is believed to play a significant role in human spirituality. “The pineal gland is the principal seat of the soul and the place in which all our thoughts are formed”, explains Saint-Val quoting French philosopher and mathematician, Rene Descartes.

As Saint-Val’s greatest preoccupation, neuromelanin is explored to some extent in every work in his oeuvre. His interest in neuromelanin, materiality, and several dimensions of brain function and spirituality can be seen in his work with unusual, organic “skins”.

Using quasi-figurative imagery, the artist combines ideas, people and incidents central to modern debates about the phenomenon of melanin in both humorous and grotesque ways. “My paintings are rendered in a blend of traditional art mediums and a wide range of unconventional, organic materials—coffee, chocolate, ginger, tea and chocolate among them. My pictures, objects and environments are a surreal fantasia on such loosely linked themes as under-recognized African American inventors, the politics of sexual desire, and the complex aesthetics, narratives and metaphors that attach to the organic compounds neuromelanin.” 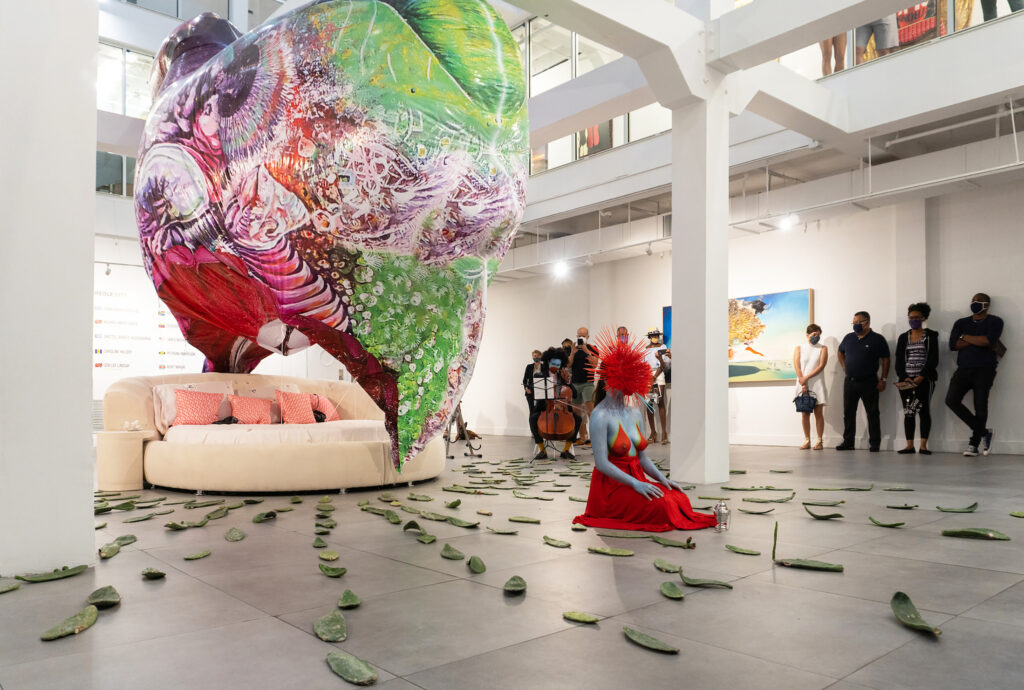 Saint-Val also expresses his art through installations such as “The Philosopher’s Stone” that are multi-sensory and interactive. “My need for fuller expression pushed me towards a more involved media. I found that through art installations; I could invite the viewer to participate more viscerally with the work,” he explains.
As part of his installations, he often incorporates a 20-foot polyethylene helium sculpture, a mattress/bed, aromas, binaural sound, foods, and performance in collaboration with other disciplines. In order to fully immerse themselves in the work, audiences can lie down on the bed and experience smells, sounds, and tastes.

Several of his newest works are on view at the new DVCAI exhibition, Depth of Identity: Art as Memory and Archive at Green Space Miami, through October 2022. More information on the exhibition can be found in this recent Artburst article or by visiting the Green Space Miami website.

For more information and to view more of Saint-Val’s work, go to assersaintvl.com.