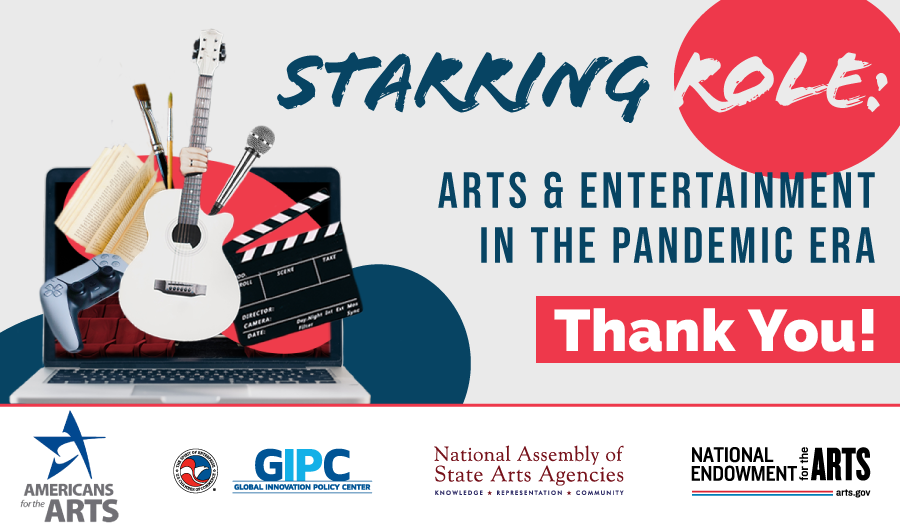 Self-isolation due to quarantine has been the enemy of the arts community.

Since March 2020 the arts industry, which according to the National Endowment for the Arts bring in $877 billion to the U.S. economy amounting to 4.5% of the country’s GDP (Gross Domestic Product), has had to deal with the effects of that.

That impact to the industry, and what artists are doing to keep it going was the focus of the recent virtual program “Starring Role: Arts & Entertainment in the Pandemic Era.” It was presented by the Global Innovation Policy Center in conjunction with the U.S. Chamber of Commerce, Americans for the Arts, National Assembly of State Arts Agencies and National Endowment for the Arts.

Split up into five separate conversations led by representatives from each of the host organizations, guests included well known names like actress Annette Bening, musician/songwriter Verdine White of the group Earth Wind & Fire and leaders from the museum and music industry.

Suzanne Clark, president of the U.S. Chamber of Commerce moderated the conversation with Annette Bening and Mary Ann Carter, former chairman of the National Endowment for the Arts.

Both shared what drew them to the arts, Bening recounting a ninth-grade field trip to see a play that drew her to the industry while Carter came to the arts due to a need to help her daughter’s dyslexia. Carter searched for schools where her daughter could be academically successful. She ended up attending schools that utilize the arts to teach. “I realized arts is a fundamental part of everyday life, especially in my household,” said Carter.

Carter’s main goal with the NRA was always informing the public about arts data and the impact of the arts. With 63% of professionals in the arts still unemployed, Carter says “the biggest impact to artists has been financial.” 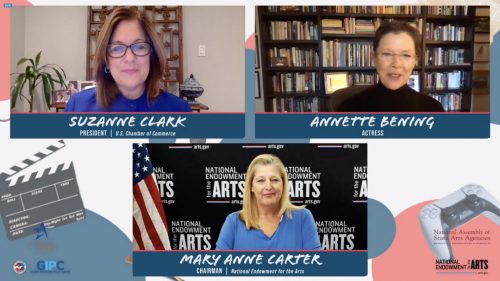 Moderated by Sunil Iyengar, director of research and analysis for the National Endowment for the Arts, he led the conversation with Randy Cohen, vice president of Research for Americans for the Arts and Michael Seman, author and professor at Colorado State University.

Iyengar began with the unfortunate news of how disproportionate the arts are now with staggering unemployment rates for actors and choreographers and a fourfold drop in ticket sales due to venue closures leading to no live events.

Serman mentioned that 2.7 million jobs were lost, have them in fine and performance arts with smaller cities like Minneapolis and Orlando were hit even harder than bigger cities like Los Angeles New York and Chicago.

Cohen said, “since the pandemic, Americans for the Arts has found that virtually every arts organizations have canceled performances and events and $14.8 billion dollars have been lost in income. 10% of organizations feel like they won’t see the other side of this.”

Thankfully, Iyengar said that with a recent cash infusion in the millions and innovative ideas “many have successfully managed to start up in some way.”

Seman said that “once we can figure out how to open safely and effectively, we’re going to emerge as the ‘screaming 20s’’ (a reference to the “Roaring 20s”).

Jumpstarting the economy is necessary to get the arts activated again. “The arts reunify our community, they get us out of the house,” said Cohen. “Attending arts events help support our local community. Large percentages of arts events attendees agree that the arts are necessary.”

Amy Webb, director of Business Programs and Partners for Americans for the Arts, led a conversation with a trio of arts leaders.

Kristin Sakoda, executive director of the Los Angeles County Department of Arts & Culture, Mitch Glazier, chairman and CEO of the Recording Industry Association of America and Joseph Benincas president and CEO of The Actors Fund all shared their stories.

Sakoda kicked if off with news about the devastating impact to Los Angeles County’s $207 billion arts economic impact and usual millions of visitors.

“In May we saw not only everyone out of work and that only 53% of the arts organizations felt confident they would survive the pandemic, but we also saw a lot of segmentation with individual artists and musicians,” said Sakoda.

They quickly mobilized prioritizing in getting grant dollars out with $12 million in Cares Acts funds administered to more than 300 organizations in the region. 83% of those 350 organizations said they would be using the funds for payroll.

At The Actors Fund, Benincas said they have been focused on direct financial assistance, mental counseling and supporting the BIPOC community.

“We work closely with many charitable organizations. We are entrusted by 17 organizations to manage their finances. We gave emergency grants to over 15,000 people and also helped artists by providing them help with insurance and self-care providing counseling and a robust list of resources for mental health assistance,” said Benincas.

In addition, more than 100,000 artists have benefited from their affordable housing efforts which have been empowered by the tax credit and actually donations. “We’re helping artists to live in tax-free housing. We’re partnering with government, private investors and philanthropists in this effort.”

Glazer says that his organization works with local and state government to ensure that money is set aside for arts groups and their specific needs.

“These are folks that normally wouldn’t qualify for unemployment for all of their income, only certain parts of their income. We’re ensuring there’s a mixed earner provision,” said Glazer. “Also, the $15 billion Save our Stages Act gives aid to those music venues where people gather and come together culturally.”

In the Spring they are set to fight for more appropriations for larger venues who provide the same but for larger audiences.

“The arts are always the first ones to come through during a disaster and they helping to raise funds and now there are hard-working artists who need our help,” he said.

The music community has come forth with sustainable programs to ensure that inequity is not something that goes away. Every record company has put together plans to ensure structural equity in their organizations, so the conversation continues. “We want to accurately reflect the value that the arts have on our economy,” said Glazer.

Sakoda echoes the sentiments of the others saying “the arts are a form of public good, helping foster healthy communities. There is less obesity and diabetes in arts communities. We are also here to remind everyone that this is work and arts are a business.”

Benincas talked about the importance of good government and philanthropy working hand in hand. It was how they build the home for the Brooklyn Ballet, thanks to good local leadership, private investment, and philanthropy. Also, using the example of the presentation of the musical “Ratatouille” on Tik Tok to reflect that “the arts can exist in a digital world.”

Pam Breaux, president and CEO of the National Assembly of State Arts Agencies began by saying “small businesses are at the heart of our country’s economy.”

At Funky Brown Chick, Inc., a pop culture, entertainment and data analytics firm, Hines has to hire people for all functions for her virtual events. To her, creativity always matters, “something we see as an important for both business and the arts. The arts just like any other business are important for creativity and job creation,” she said.

Adaptability has been key to her business survival. Not having a live audience looking back at you, smiling and laughing meant strategizing, which she recommends to everyone.

“Maintain your focus. Be extremely comfortable with uncertainty both professionally and personally, it is to be expected and find your community, networking has never been more important,” she said.

For Hunt, at the non-profit Colorado Creative Industries they focus on strengthening the vitality of visual, performing, and literary arts through promotion, resources, and funding opportunities.

Prior to the pandemic the growth of the creative sector in Colorado she said, “had been 25% and we do not want to lose these creatives in Colorado, Hunt said. “This is a work of passion for me. We want to ensure these creatives have the tools to innovate, stay alive and come out of this on the other end with new business opportunities and a new business model.”

Currently they are working with an arts organization to move into a building permanently, be the owners and help them find new sources of business.

White was quick to thank his brother Maurice While with founding their band and bringing so many cultural groups together through their music.

He said the band has remained active, recently recording a Christmas album with singer Meghan Trainor. They are also involved in their local community in Chicago as part of a food distribution site and work with other musical artists and leaders in the music industry.

With Wade mentioning that 44% of black businesses have closed, White quickly echoed the thoughts of others during this program saying, “artists are always the first ones there to fundraise and help in these situations.”

White also feels people need to reach out and find out what the artists need and what is going on in the industry.

Closing out the program were Narric Rome, vice president of Government Affairs for Americans for the Arts and Pam Breaux.

Rome said, “we hope the shutdown will end and financial stability will return in 2021.”

One very promising act in that road to financial recovery “are the 204 Chamber of Commerce who authored and signed letters to Congress in support of the arts and increased federal relief funding in the arts sector,” said Rome.

Along with working with local government and chambers to improve local economic strategies, Americans for the Arts along with over 100 partners crafted the policy “Putting Creative Workers to Work” a 16-point policy proposal to support the sector at large.

Breaux closed out the program saying, “the arts and creative sector can improve the health of the broader economy, we’ve seen this happen during prior economic downturn.”