ARTS IN THE FAST LANE WITH NEW CAUSEWAY PROJECT 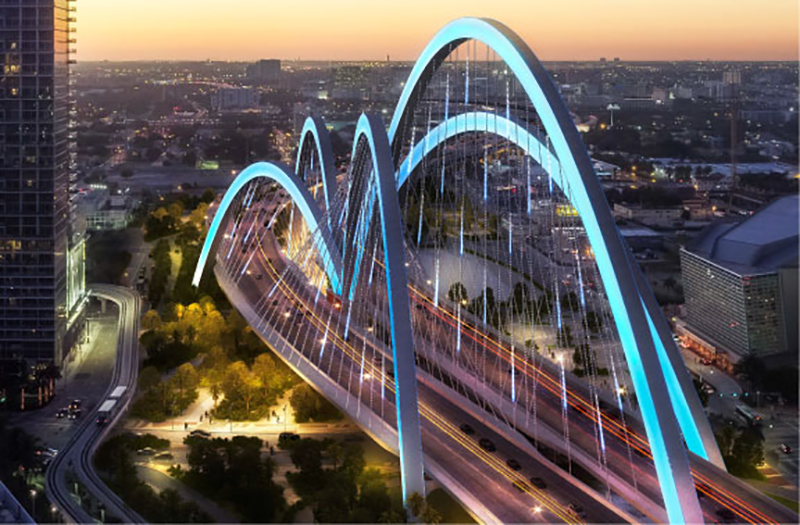 The only thing Miamians hate more than traffic on our highways is construction on our highways. There are many concerns about the new construction project getting underway in downtown Miami. Everyone wants to know how bad it’s going to be, and are predicting a “carmageddon” on the horizon. I’ll warn you now, dear reader: I’m an incurable optimist. If anyone can see a silver lining in anything, it’s me. So, here’s my take on what’s ahead; hopefully you’ll join me on the sunny side of the street.

Earlier this month, the outreach team involved with the Connecting Miami construction project held several town hall and open house meetings across the county.  I attended the one at Miami Beach City Hall, using the causeway in question – you know, the one that’s currently under construction. Traffic had me in just the right mood to ask a few questions. It looked sort of like a time-share sales pitch when I arrived: over-sized drawings and schematics on easels, people with name tags standing around making conversation. I wasn’t sure who to talk to, so I sat and watched a short video overview of the project first.

The video is just a few minutes long, but it shows exactly what is going to happen to the interchange of I-95 and I-395, and I started to get pretty excited about the whole thing. The narrated video explains traffic flow and how the double-decker lanes will be created using existing lanes of 836, alleviating traffic by allowing faster traffic to flow on the top level and slower, local traffic exiting to the downtown areas on the lower deck lanes. There’s a slick animation showing the existing lanes and current traffic flow, with a sweeping construction of new lanes transforming the downtown interchange for a 21st century solution. That video should be available on their website soon, along with renderings of the project.

After the video, I walked around and looked at the renderings,  trying to make sense of the technical drawings and color-coding (click here to see them for yourself).  The one thing I could detect was a huge swath of green  in a space where there is currently mostly asphalt and shadows and a huge new public space for gatherings and activations. I noticed an official looking man with a name tag standing nearby, so I waited my turn to introduce myself and ask a question. I wanted to know if the green space was one, long connected area or not; I’m excited to think that we’ll have more walkable areas here in Miami (not that I walk all that much, but I could…)

While waiting my turn, I overheard him say that he was involved in destruction of the drawbridge at the east end of I-395 decades ago, when the film production of “Just Cause” used the demolition of the bridge as part of a movie scene.  Now, he’s back to work on this project – another historic event in Miami. Scott Gombar introduced himself to me as a Senior Project Engineer and part of the CEI (Construction Engineering and Inspection) Team that oversees construction on behalf of the project owners FDOT and MDX. He answered my questions about the green patch on the map, and explained that this will be a public green space connecting the downtown areas with walkable paths. There will be a large public promenade and a pedestrian tunnel, connecting the Perez Art Museum and Frost Science Museum to the Adrienne Arsht Center – the entire Museum Park area will be connected as one downtown arts district.

Then another member of the team introduced me to Oscar Gonzalez III, Senior Community Outreach Specialist for Connecting Miami. I explained that as a representative of the Arts & Business Council, I’ve heard that the cultural institutions in the affected areas are concerned about the impact on audience attendance. Mr. Gonzalez recognized the concern and assured me that he was meeting with each of the organizations’ leaders individually and would be coordinating construction and messaging efforts to align with their schedules, along with other high-traffic events that happen in the Magic City – such as Music Week, Art Basel, and sports events.  The construction will be halted during major, city-wide special events like these, and message boards will be placed far outside of the affected areas, to inform drivers of the traffic or lane closures ahead. Mr. Gonzalez is serious about his outreach; he handed me a business card with an email and cell phone number on it. You’ll find that information on their website as well.

We are just in the beginning stages; the construction will take another 4 1/2 years. In order to get as much information out as they can, to help everyone through the process, the project team is reaching out to as many organizations, neighborhoods, associations, and any other community groups that are interested in hearing about the project. There is information on the website and they are willing and ready to visit organizations to discuss the project and how it may impact their areas. Miami drivers are encouraged to visit the Connecting Miami website at www.i395-miami.com for information and updates on the project, or to schedule their own meeting with the project’s Outreach team.

Connecting Miami seems well thought out, is conscious of the people being impacted, and looks ahead to support the ever-growing, cosmopolitan city that is Miami. Plus we’re getting an iconic landmark with the beautifully designed arches as the centerpiece. Traffic is already worse than we can stand in that area, so a few years of surgery can’t be worse than leaving this clogged main artery to fester in the heart of downtown Miami. Personally, I’m very excited about many of the improvements coming to that entire interchange area, but my personal favorite is the 826 East to I-95 North ramp, which will be extended to 2 lanes instead of just one. The thought of not sitting in one lane for 20 minutes, just to head north – that alone is reason to rejoice.