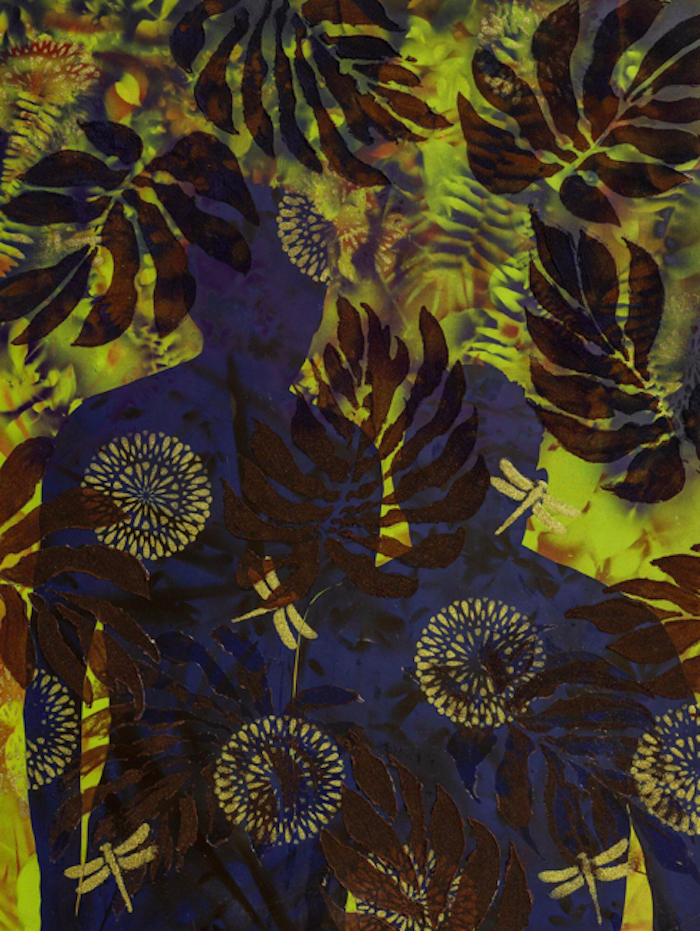 In 2016, when a Nature Climate Change story prophesied that sea level rise could render Miami unlivable by 2100, those deemed most at risk were affluent residents living on the coasts. During subsequent hurricane seasons, the dual threats of sea level rise and storm surge flooding have only increased, as when this year’s Hurricane Eta brought thirteen to fifteen inches of rain in some areas.

These days, however, we see an additional, rapidly trending issue: climate gentrification. Where will all the coastal inhabitants go when not just the storm surge, but the high tide is at their doorsteps? This rhetorical question, paraphrased from my recent interview with Haitian-born Miami artist Morel Doucet, is one that defines this phenomenon quite succinctly; it’s also the main focus of his upcoming body of work, Water grieves in the six shades of death. 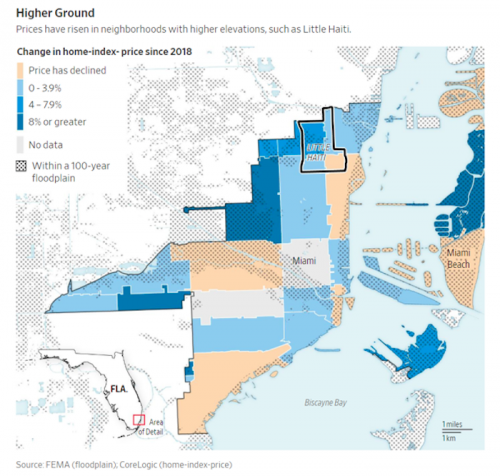 Diagram from the Wall Street Journal showing the fluctuation of housing prices from 2018-19, with Little Haiti outlined. (https://www.wsj.com/articles/on-higher-ground-miamis-little-haiti-is-the-new-darling-of-developers-11555946726)

Prominent Miami Gardens community organizer Valencia Gunder defined climate gentrification pretty well in a 2018 New Yorker article by Carolyn Kormann, citing it as “a trend of underserved communities being taken over by investors and developers due to rising sea levels.” Simply put, it turns out that those who can afford to are moving toward higher ground – generally inland. And with this migration, those communities that have been present for generations are becoming crowded out – in space, time, legislation, and representation.

In our interview, Doucet connected this increasingly observable pattern to his next three-to-five-year project. “For me, I pass through these places, remembering that I grew up here, and my skin crawls… That’s the energy I’m trying to capture in this work,” he said. And in a solemn moment he added, “Water grieves is about the changing landscape of Miami… These communities of color – Little Haiti, Brownsville, Allapattah, Overtown – I strongly believe that within our lifetime, these communities will probably cease to exist.”

In Doucet’s view, there’s a clear exodus about to happen – and, as an artist, it’s his responsibility to use his platform to document the story. He cites the neighborhood of Overtown as one of the more subtle examples of the gentrification process – in terms of how, sadly, it isn’t limited to the issues of displacement due to climate, but also results from “beautification” and urban development: “Overtown right now – Overtown is on the verge of being erased from the map. You have I-95 that runs right through it, and now Downtown keeps expanding, and there’s these 50-story buildings that overshadow it… The work, inherently, is a critique on America.”

Currently in phase one, the project is centered on generating a few hundred portraits of residents of the aforementioned at-risk communities. The portraits initially appear to be just a series of skillful, mixed media works with elaborate floral motifs, but in truth, each depiction is intended to convey deeper, more metaphorical meaning. Doucet describes his process as “gathering the flora and fauna of these neighborhoods,” (i.e. the people and plants native to their specific natural environments) to “create this ecological mapping of these spaces… where the people in them are symbolically represented” – where they may have already been forgotten by the greed of capitalism and the guise of progress. 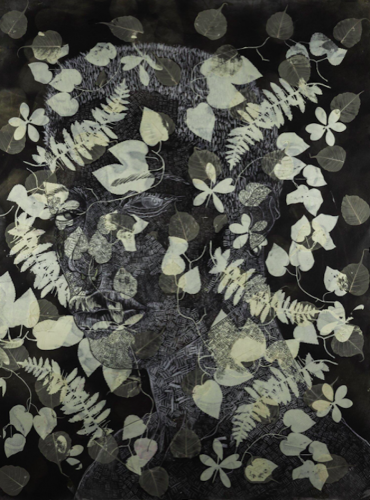 “Every horizon line is a double metaphor waiting to dispel the truth;” carbon drawing; (Photography by Pedro Wazzan; photo courtesy of the artist)

For instance, “Every horizon line is a double metaphor waiting to dispel the truth,” depicts a black youth decorated by a dazzling assortment of seemingly random foliage. In reality, however, this resident of one of the threatened Miami neighborhoods is accompanied by etchings and pressings of some representations of the plant life that can be found in his everyday experience. It’s a roundabout way of showing something that can easily go overlooked – the idea of spiritual memory, which Doucet described as “capturing the energy of these people through the spatial ecologies that they inhabit. Instead of creating fully-rendered portraits of people, I’m using the surrounding ecologies to do that, instead.” Especially in the case of “Every horizon line is a double metaphor waiting to dispel the truth,” the plants are foregrounded within the overall visual depiction. They allude to something deeper, and that’s the presence of water – ironic in terms of sea level rise – but also to the more philosophical notions that water runs through everything, has been around since the formation of the universe, and will remain – economic development notwithstanding. In this sense, for Doucet the plants convey an almost magical realism, “where they hold onto the memory, the energy, and the essence of those spaces.” He believes that by faithfully representing those ecology-spaces, he’s really tapping into the essence of these communities.

Doucet intends to add more mixed-media and even digital pieces to Water grieves. Already, he asserts, “it’s very bold, very vibrant. It’s the energy of the Caribbean, the energy of the people – and that’s captured through the color palette, as well,” but he contends that this can only depict part of the drama, since still images can only go so far toward properly representing the range of culture and the variety of backgrounds of Miami’s higher-ground inhabitants. He feels that a multifaceted approach – to what seems to me more like a bonafide exercise in ethnography, if not an artistic anthropological meditation – would best suit the range of documentation he wishes to create.

Moreover, to more effectively utilize his art as a political weapon, he acknowledges the need to get even more personal with the project. He hinted that the next phase might include examples of his own prose poetry, but says that we’ll have to wait and see, concluding, “As for the titles, I want to leave it up to the viewer for how they perceive my work.”