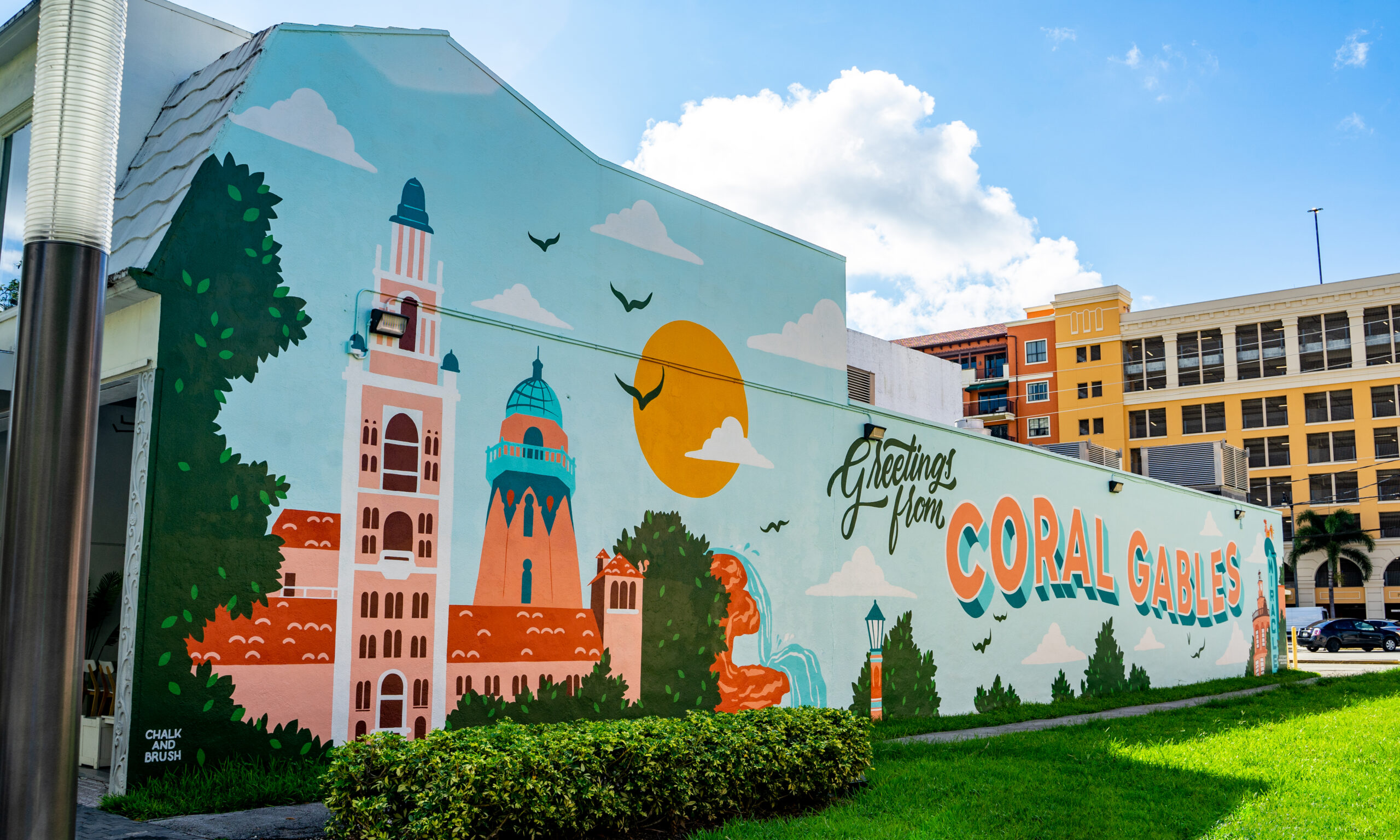 At the beginning of COVID in 2020, husband and wife designers Benjamin Levy and Cinthia Santos, also known as Chalk & Brush, were contacted by the City of Coral Gables about the “Murals on the Mile” project. They were familiar with this kind of project as the two had been involved in creating other similar public art pieces.

Chalk & Brush started out in 2013 as just a husband and wife team doing sign painting and chalkboards; now they’ve grown to a team of 10 focusing on murals and public art.

“A lot of our murals are inside restaurants and resorts, but now our art has gone outside,” Santos said. “Our murals get a lot of social media public attention and, for this project, our focus was to promote businesses being outdoors.”

The City of Coral Gables and the Coral Gables Business Improvement District (BID) partnered to create the city’s first-ever mural project which includes four street art creations for the area’s iconic Miracle Mile, to be exhibited through September 2022. The decorative displays are designed to inspire residents and visitors to safely visit downtown Coral Gables. 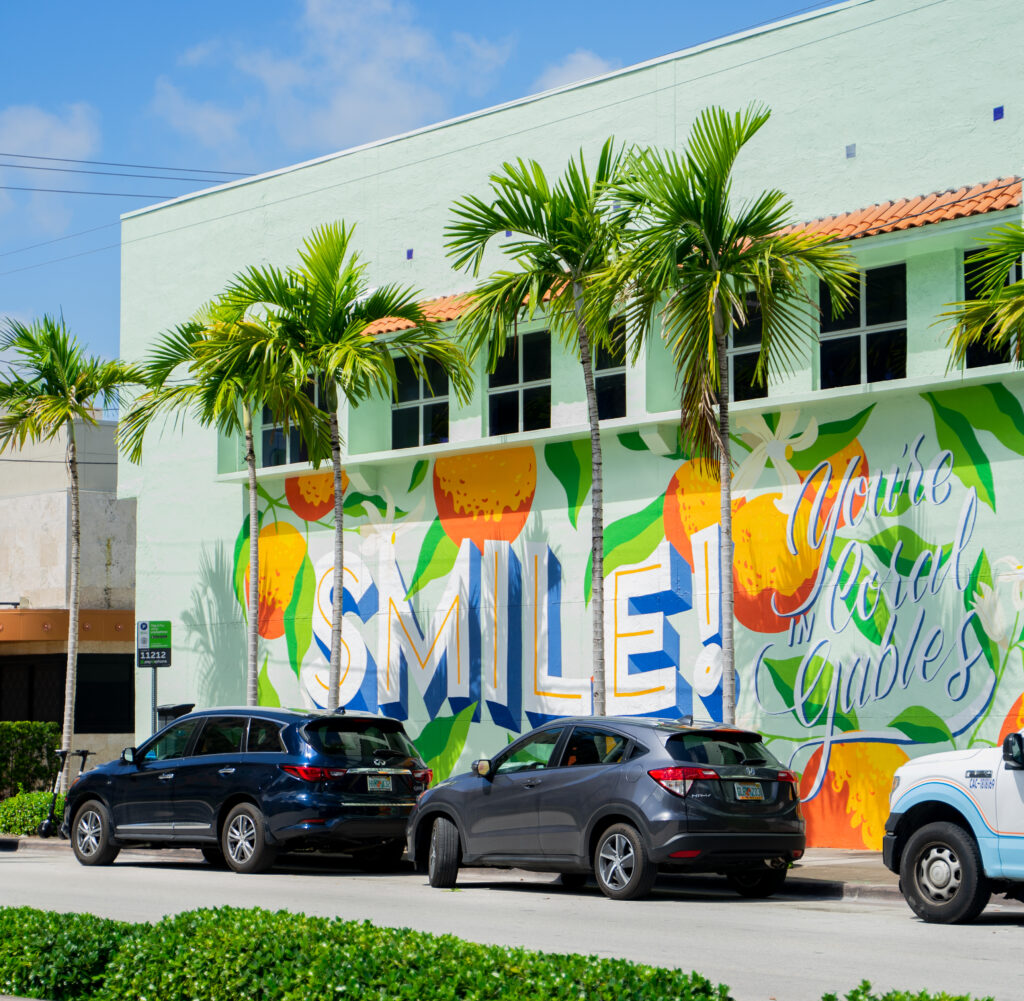 “Smile, You’re in Coral Gables”—Located at the corner of Miracle Mile and Ponce De Leon Blvd. (Photo courtesy of City of Coral Gables)

Throughout the process Chalk and Brush met with many city officials, especially since this wasn’t their typical mural project. The city mainly reached out because they were facing a few challenges getting people to visit and spend time on Miracle Mile.

“Murals on the Mile adds an uplifting and whimsical backdrop to Coral Gables’ bustling business district,” said Aura Reinhardt, the BID’s Executive Director. “The designs are an expression of the city’s heritage and will enhance the experience for visitors who come to the area.”

Originally, the plan was to create three murals but eventually they settled on a fourth building. They walked and talked about which ones would be the best.

From the team of 10, five of them painted the murals and each mural took about a week. They started in the middle of the rainy season, “and each one took a good 30 minutes to set up,” Santos said. 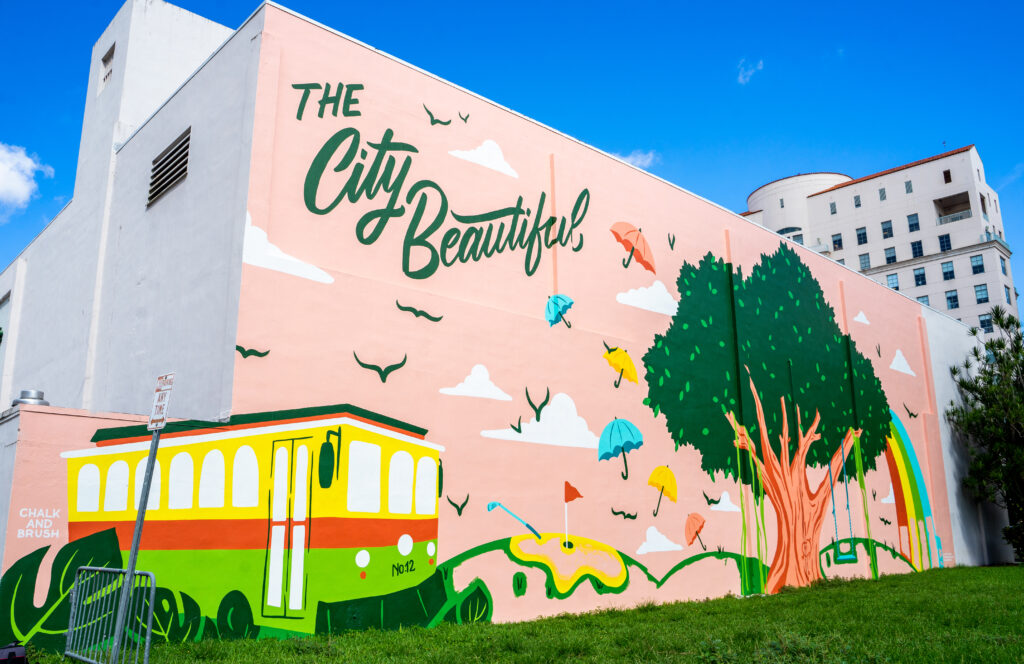 Already known for creating very colorful murals that always incorporated some lettering and illustrations, the duo and team automatically began brainstorming different quotes they would incorporate into their designs.

They knew they wanted to feature the city and evoke different positive feelings without making the murals seem too much like a billboard. 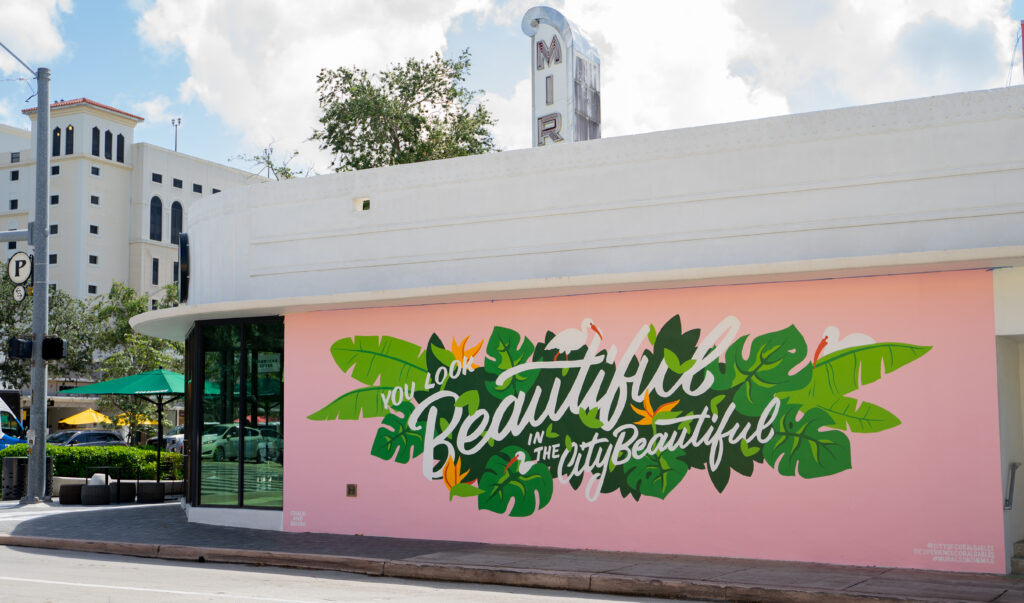 “The pink one on Salzedo is very much like me with the pink and green. And the other ones incorporate the different recognizable landmarks around Coral Gables,” Santos said. “The city was great about suggesting elements we should incorporate, like the trolley and iconic Biltmore Hotel.”

She goes on to say that “all the murals have similar tones so they’re like a story, yet they each have their own individuality.

These are the mural locations and names:

At the McBride Plaza, two murals face each other: “The Greetings” and “City Beautiful.” With their addition, the Plaza became a destination.

“It has gone from being just a passageway for people to a spot where folks linger to take photos and hang out,” said Levy.

Their hope is that the city will recognize the value of the artwork they’ve created and will keep them up for an extended period of time.

“We’re happy to see them now and love to see how happy they make people. We are Coral Gables residents and have taken our kids to Miracle Mile for years,” said Santos.

Learn more about the work of Chalk & Brush on their website chalkandbrush.com.