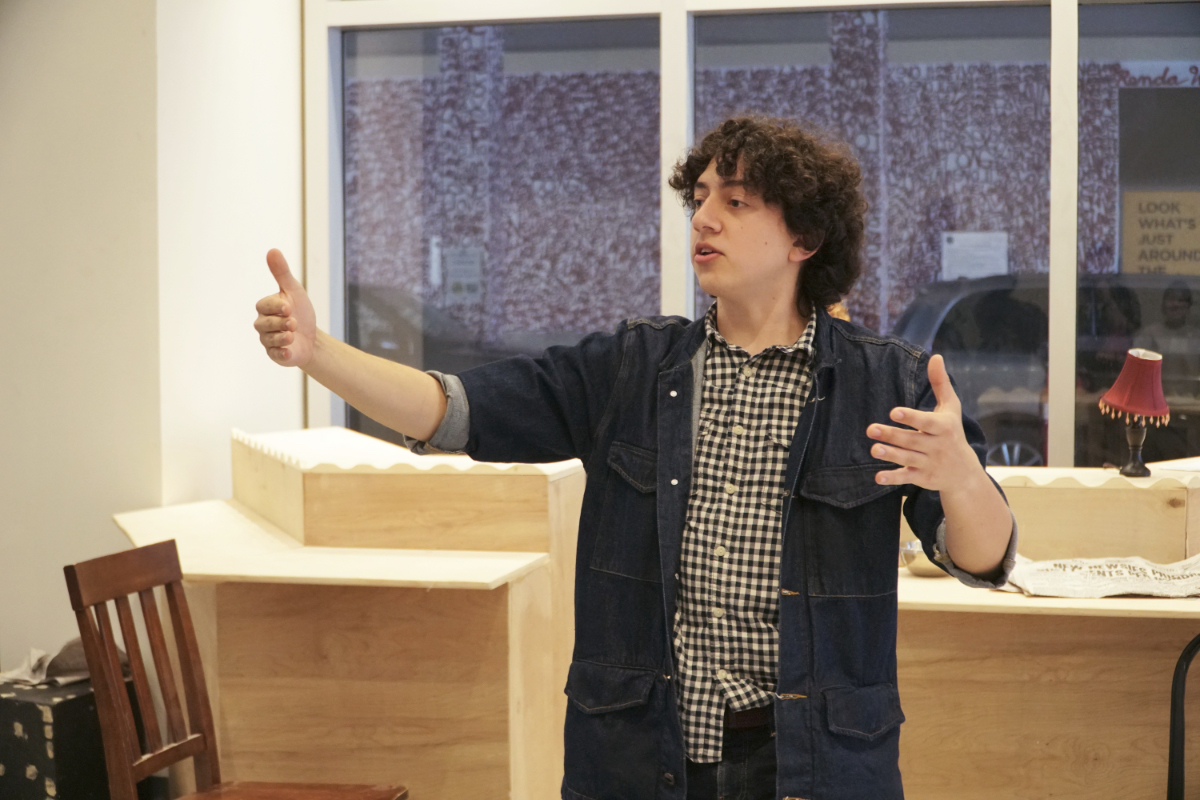 “My parents got the Riviera Theatre in 2008, and that’s when I started helping out – sweeping or helping out around set – stereotypical family business stuff,” Rodaz says.

At 25, Rodaz is a rising South Florida theater star, in large part thanks to his demonstrated creative success as a director-designer.  His scaled-down, immersive version of the Broadway classic “Annie,” which runs through July 4 at Area Stage’s  new home in South Miami’s Shops at Sunset Place, has won him a fresh round of critical praise and enthusiasm from packed audiences of theater lovers.

Rodaz is now the company’s associate artistic director, in charge of its conservatory productions, choosing and directing many of its professional mainstage shows, designing lighting and sets.

But the family business – running a theater company and a thriving conservatory program – didn’t always appeal to a young, homeschooled boy who at the time was much more interested in playing video games or drawing comics.

“What’s funny is that growing up, I didn’t really like theater,” Rodaz admits.

Even so, Rodaz could not escape what seemed like his fated environment. As a kid, he would accompany his parents to the Riviera in Coral Gables, taking his online school there and making friends with the other children in his mother’s conservatory program. 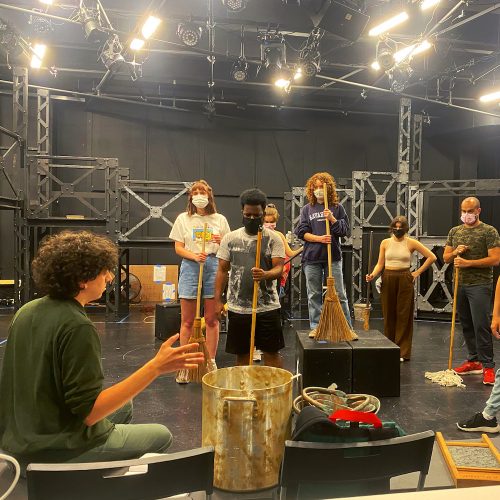 The big push to embrace the theater finally came when his parents persuaded him to audition for “Fiddler on the Roof,” one of the conservatory productions.

“Originally, I was very opposed. But it was the first show that I did, and after we opened, I just remember thinking that I absolutely loved it,” he says.

John Rodaz remembers his son’s early exposure to a theatrical environment and the obviousness of his innate passion.

“When he started to perform, he liked it, and we could see that he liked it,” the young director’s father says. “We never forced him to do anything – he basically just took to it. It was a natural process for him.”

With his newfound love, Rodaz started exploring a variety of jobs around the theater: acting, set production, lighting.  He eventually expanded into directing.

His parents finally “…trusted me to direct a children’s show,” Rodaz says. “’Winnie the Pooh’ was the first show I ever directed. Apparently, I did a good job, because after that they kept giving me more stuff to do.”

As complex as directing a show is, it quickly became another passion for Rodaz. During his childhood, he made short films and started a comic book company, hiring his friends as authors and artists. That led to an affinity for big projects and bringing everything together. 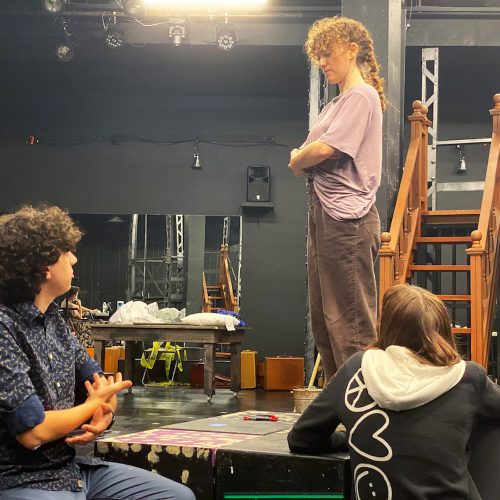 “It’s exciting to get people together and do something bigger than ourselves – that’s what drives me, and that’s what theater is. It’s the art of community,” Rodaz says.

For Rodaz, that community was also literally family.

While gaining experience and working under his parents provided the young Rodaz with a plethora of creative opportunities, he notes that they were also tough and held him to high standards.

“What’s been nice about my parents is that they really don’t coddle me,” Rodaz says. “It felt like I was growing up in a New York University master’s degree program.”

Despite the intensity of his early experience, Rodaz attributes much of his success to the practice-based educational environment provided by his parents.

“[My parents] were very realistic and tough but always very excited to see how involved I wanted to be,” Rodaz says “They were always pushing me to do more and push myself a little harder, and that’s the only reason I am where I am now.”

As parents and mentors, the elder Rodazes also had a tough job, navigating a balance between providing their son with artistic freedom while also giving necessary feedback.

“What we wanted to do was create a path for him,” John Rodaz says. “It was tough because even though I would step in and make suggestions, I didn’t want to…tell him what to do, because it’s an artistic endeavor.”

Taking his parents’ advice as he pursued his directing career, Rodaz took on “Alice in Wonderland” as the first show he staged completely on his own.

The production proved to be a learning experience more than anything.

“That was one of the best moments for me because of what a disaster it was! I clearly did not know what I was doing,” Rodaz says. “What taught me more than anything was that experience. I could not think of a better way to learn.”

With a strong “learn as you do” mindset, Rodaz never felt the need to pursue a formal theater degree.

“Whatever money we would have spent on college has instead been put towards me travelling to see shows on Broadway or in Europe,” he says.

Being able to watch a variety of theater – from the Royal Shakespeare Company in London to small companies in New York and cities all across Europe – has made Rodaz a believer in real-world education.

“I have seen so many shows, and that’s what has really shaped me,” Rodaz says. “There’s no way I could have learned all of this in a classroom.”

Learning the harsh realities of a life in the theater has been among his most valuable lessons. 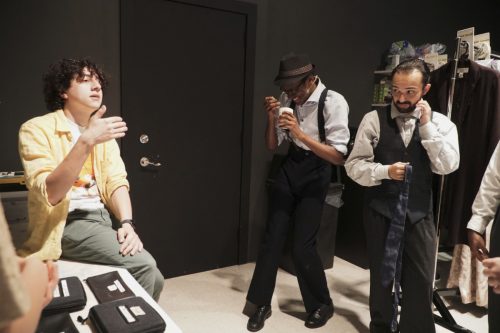 “Theater is extremely hard to do. It’s extremely cost-intensive, you don’t make any money back, and it’s hard to get people [to come] out,” Rodaz says, acknowledging that he sometimes questions his decision to go into the business.

“Every element has to work to get that show over that finish line where it’s watchable or where at least you’re proud of charging someone money for a ticket,” Rodaz says.

But this awareness of the industry has also made him see how vital it is to create strong productions.

“It’s the easiest thing ever to make a show that is just boring and terrible – or even worse, mediocre,” Rodaz says. “That’s my philosophy.”

Fear of being mediocre is what helped motivate Rodaz to bring a fresh take to an endlessly produced Broadway classic, 1977’s “Annie.”

In his interpretation of the Depression-era tale of a young orphan girl, Rodaz implements what could best be described as a less-is-more approach. In a piece usually requiring multiple child actors, Rodaz uses only eight – all of whom are adults. Simple set pieces and imaginative props are part of the immersive theater environment, which looks like a Prohibition-era speakeasy.

“Every time you do something onstage, you have to have a really good reason to do it,” Rodaz says. “Just doing a show like it was done in New York or copying a production design – what’s the point? There has to be an exciting process of doing something new and for a reason.”

Rodaz’s fresh takes on shows continue to inspire actor Katie Duerr, a longtime friend who is now the director’s girlfriend.

A recent graduate of the University of Miami’s Frost School of Music Vocal Performance program, Duerr became a close friend of Rodaz while the two worked in conservatory productions.  They developed a collaborative relationship when Rodaz asked Duerr to be the musical director of his first original production.  Since then, she has acted in and worked on countless Area Stage productions under the direction of Rodaz.

“So much of my opinion is shaped on his idea of stripping away the artifice of theater – the idea of making sure that above all else, everything is honest and fresh,” Duerr says.

And for Rodaz, “Annie” was the perfect way to transform something that people might have dreaded seeing again into a piece of art that opened their eyes. 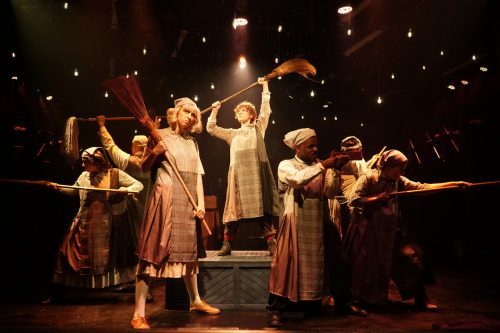 “Really, ‘Annie’ is about a father and a daughter finding each other, and that’s something people don’t think about,” says Rodaz, who calls the show’s script masterful. “What matters to me is that I read a script, and it touches me in a way, and I want to bring that out to other people.”

Bringing shows to life in new and refreshing ways is something that Rodaz does not plan on stopping anytime soon. Immensely grateful for Area Stage and the opportunities, lessons and mentorship provided by his successful parents, Rodaz plans on continuing to bring his style of “creative and weird” theater to Miami, hoping eventually to take one of his shows on the road.

“I’m still really young, and there’s a lot for me to learn,” Rodaz says. “The one thing that my parents do [that] I would love to keep doing is giving opportunities to young people and cultivating a culture of theater. Because once people discover what that is for real, they really do love it.”