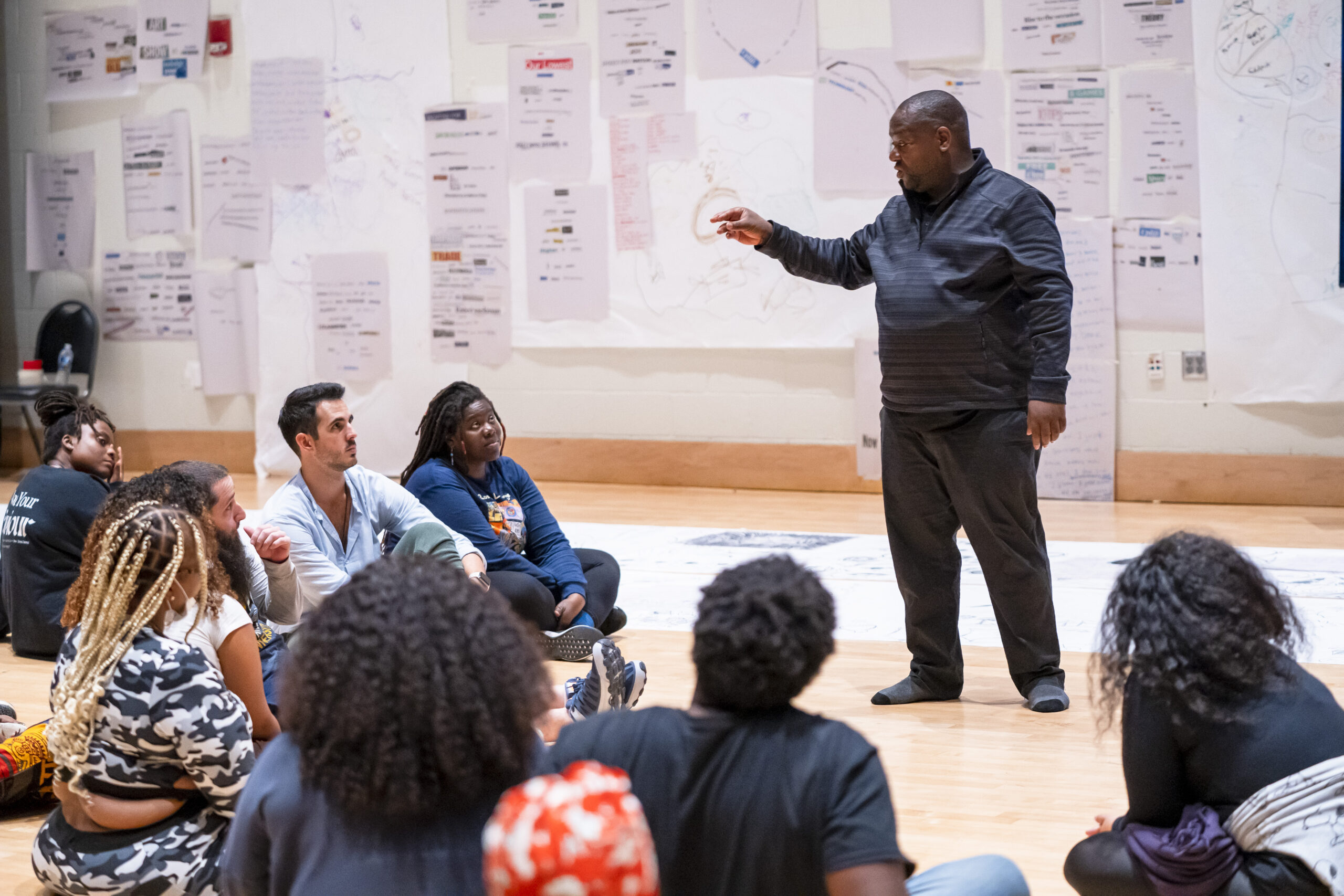 The Adrienne Arsht Center, in conjunction with Director Willian Kentridge’s “The Head and The Load” have created something uniquely impactful and far reaching for Miami. Weeks ahead of the show’s opening night December 1st, a new and highly collaborative Artist Residency offering went out across multiple disciplines to Miami’s visual and performing artists, writers, spoken word artists, filmmakers, set designers and educators. Over 115 local artists and educators registered on a first come first serve basis.

The workshops and master classes were based on story behind “The Head and The Load,” the unacknowledged history of the 300,000 Africans who were killed serving primarily as porters during World War I. Course work was based on immersive, collaborative improvisation stemming from Kentridge’s celebrated artistic techniques which simultaneously focus on elements of performance, design, and sound.

“The idea was to really engage our local arts community at a more experimental level so that participants in turn, could take all the techniques used to create “The Head and The Load” production, and then be able to use those techniques not only in their own craft, but also in their own communities to create a composition of artists,” explained Jairo Ontiveros, Vice President, Education and Community Engagement at Arsht. 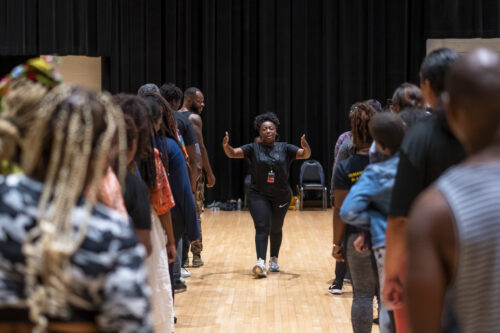 Sibahle Mangena, “The Head and the Load” Residency Facilitator, leading local Miami artists and educators in a group exercise during the Community Masterclass at the Arsht Center’s Peacock Foundation Studio. (Photo by Taylor Brown)

Visual Artist Nat Dee described his workshop experience, saying, “I thought it was amazing. One of the things that stood out to me about it was just how thoroughly you could really explore a topic, like I thought that I dove deep when it came to me researching a subject before I created a work. And then I realized coming out of the workshop that I was definitely not diving that deep. I was really just scratching the surface.”

In time for the first Artist Workshop of November 5-6, the Residency Facilitators from “The Head and The Load” who arrived from South Africa were Nhlanhla Mahlangu, Actor, Featured Vocalist/Performer, and Thulani Chauke, Dancer, plus residency team member performer Sibale Mangena. They asked local visual artists, filmmakers, poets, writers, and teachers to improvise alongside local performing artists. For example, they asked small groupings of two to become the African porters in WWI by marching and saluting until exhaustion overwhelmed one partner into physical collapse, to be immediately slapped awake or supported by the other partner, over and over again. Exercises included exhaustively trying to find the best way to physically drag the dead weight of your partner off an imagined battlefield. Small groups pretended to be the world leaders at the Berlin Conference in 1884-85 tasked to divide up ownership of Africa on huge sheets of paper without the use of language, they were only allowed to use gibberish, sound effects, song and expressive acting to negotiate. 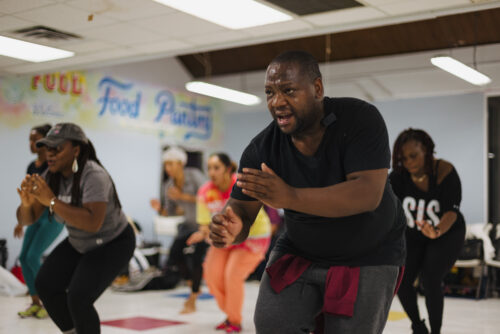 Nhlanhla Mahlangu, Actor, Featured Vocalist/Performer and Dancer from “The Head and The Load” leads dance activity at the Belafonte Tacolcy Center in Liberty City. (Photo by Alex Markow)

Omilani Alarcon, Visual and Performing Artist, Poet, and scholar, thoughtfully considered her Residency experiences, “It was enlightening. It was very telling, and it expanded my lens as an artist. The whole workshop was really a bunch of moments to realize you weren’t in control. That you got to let go of your ego, and the more you let go the more powerful it was. That the more you detach from who you were, the more you got out of it. I got everything out of it, it really made me look at myself as an artist in a different way. I felt I was freed as an artist from the chain of perfection.” 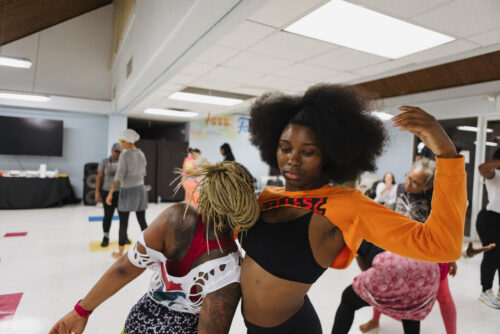 The Design and Creativity workshop was led by Sabine Theunissen, Set Designer for “The Head and the Load,” who asked artists to create their own miniature “The Head and The Load” sets. She explained, “I wanted to start with the music. Knowing that most of the participants were visual artists, I thought it’s good to give them give them inspiration, but no visual reference. We had a limitation of time, three days, and I gave them limitation in the use of material and the final form. I said, it has to fit on a table, but you should start with the objects. For me, the process is what is important. To let them understand that your fragility, your weakness, your limits are also tools and advantages. Don’t be afraid of being wrong. Don’t be afraid of being stupid. So, if I could have achieved that with them – playing in a very playful way. I think playing is essential.” On her overall experience Theunissen summed up, “I just want to thank this visionary community to have invited me here because it was quite a privilege to be here with a great mix of all ages, all backgrounds, gender, all these kinds of people coming together in the most simple way. It is just reminds a little bit of South Africa.” 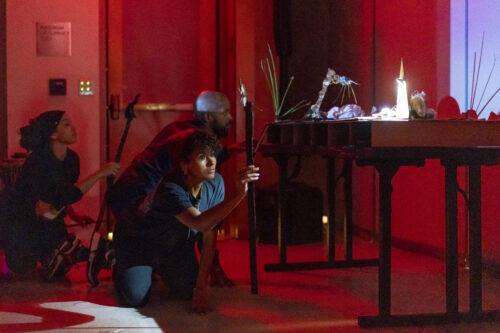 Visual artists, Jean Blackwell and Iggy Font of CollaboARTive artists collective, attended Theunissen workshop and both agreed it was a tremendously rewarding experience. “I learned some techniques and some practices and some different ways of looking at things that will definitely find their way into my artwork – that is going to feed my art,” said Jean. And Iggy pointed out how the workshop has already changed him, as he explained, “for me last night was a clear indication, we went back to the space we had to do open studio, but then we had to go to an opening right after, but we took three of the persons who are part of our studios with us which is not something we have ever done, the whole community aspect of it has changed for me, because I feel very, very blessed.”

All of the Residency attendees were invited to the dress rehearsal of “The Head and The Load.” Dr. Precious Symonette, Creative Writing Teacher at Miami Norland Senior High School, explained how she saw the rehearsal after attending the Artist Residency, “I think going through the workshops, and then seeing the play, it was just like a different level of emotion for me. It was as if I was transported back to the workshops. And I had to kind of pull myself back and forth. But it was very amazing. It was phenomenal. But I for me, I think it was extremely emotional. Because of what I went through like learning the stories, as well. I think it definitely needs to be something that is introduced in schools. I think educators should know about it, and it should be shared with the students because it shows the power of telling the story.” 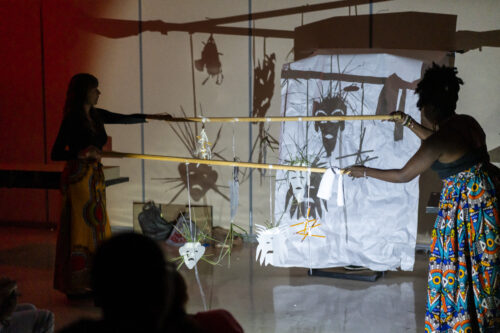 Meanwhile, Artist Workshop Facilitator Mahlangu said when asked after the dress rehearsal about his experience of bringing “The Head and The Load” from South Africa to Miami’s artists, “what strikes me about them is how they were received and the pleasure and honor to have to be in the room with the people there. You know, when I walked in, I said, I should be sitting here listening to you because they are artists in their own right, some of them had PhD in their fields. And but to be humble enough to be willing to absorb what I had to offer and what we had to offer, that was very, very special.” Finally, in response to the question of how it felt having the workshop artists in the audience, he warmly responded, “like I’m performing for my family. It felt like when your mom and your dad and your sisters and your brothers are in the audience, it felt like that and it’s a very rare feeling to get performing over the seas.”